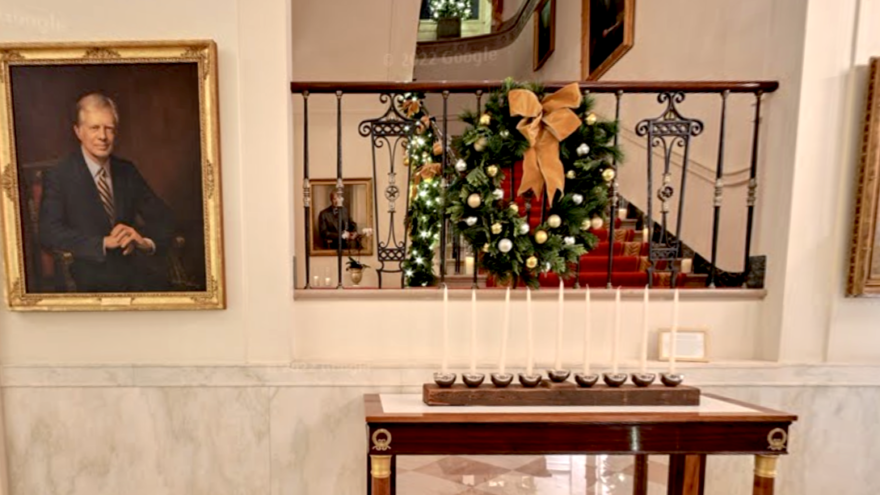 (December 9, 2022 / JNS) As part of its annual Christmas decorations tradition, the White House has unveiled a new addition: a menorah in celebration of Hanukkah.

The menorah is included in Cross Hall, a broad hallway on the first floor of the House, underneath a wreath. It is positioned between the portraits of presidents Jimmy Carter and Lyndon Johnson.

According to the White House, the menorah was constructed by the Executive Residence Carpentry Shop from wood leftover from the 1950s-era renovation during Harry Truman’s presidency.

Menorahs have previously been lit in the White House, but this is the first time one has been included as part of an official display. The positioning near the Carter portrait is apt, as he was the first president to celebrate the holiday with a lighting of a menorah in 1979. In 2001, George W. Bush was the first president to host a Hanukkah party, lighting a menorah in the White House residence.

When we light this menorah in the White House, when Jewish families place menorahs in their windows, we are proclaiming liberty and showing that there is still light. That little bit of light, wherever it is found, can dispel the darkness and illuminate a path forward. pic.twitter.com/cHtGAJbIfT

“You know, when we light this menorah in the White House, when Jewish families place menorahs in their windows, we are proclaiming liberty,” Biden said at the time. “We’re exercising the freedom that the Maccabees sought to simply practice their faith. And we’re showing that there is still light, that even the most fragile flame can be sustained in a tradition and nourish the soul of a people.”