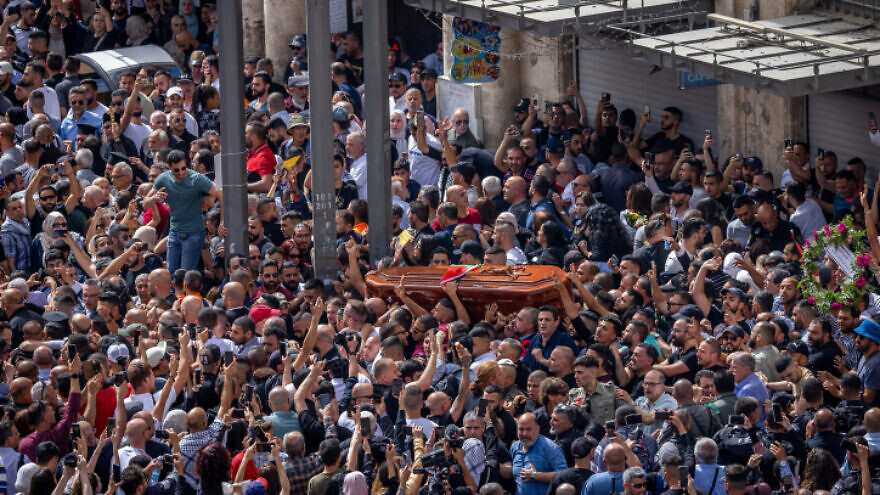 (July 4, 2022 / JNS) As the investigation into May’s shooting death of Al Jazeera journalist Shireen Abu Akleh moves into a new phase, Israeli experts say that the real issue is not who killed her, but the narrative that has been woven around the incident.

U.S. forensic experts have completed ballistic analysis tests of the bullet that killed Abu Akleh during clashes between Israeli forces and Palestinian gunmen in Jenin, with the results expected to be made public shortly. The Palestinian Authority, which recovered the bullet, had initially refused to hand it over to American authorities, but eventually agreed to do so on condition that the probe be carried out with no Israeli involvement.

Israel Defense Forces Maj. Gen. (res.) Gershon Hacohen, who served in the military for more than 40 years and is currently a member of the Israel Defense and Security Forum, told JNS that while Abu Akleh’s death was regrettable, the incident itself is not unique—many journalists across the globe are killed every year covering wars. That this particular event has generated so much attention, he said, is evidence of an irrational fixation with Israel.

“It doesn’t matter if Abu Akleh was a Palestinian or an American or any other nationality. She was a journalist who entered a battlefield, and there is risk involved [in that]. Hundreds of reporters perish the same way, and it is obvious that Israel did not kill her intentionally. What is the difference between her case and other places of conflict?” he said.

He further emphasized that the IDF goes to great lengths—“more so than any other military in the world”—to avoid civilian casualties.

“The IDF does not enter Jenin with tanks or other heavy weaponry, even if this puts its own soldiers in greater danger,” he said. “Meanwhile, Jenin has been under the control of the Palestinian Authority since 1996, and even its forces are ineffective in the town because the terrorists that operate there are allied with Hamas and Islamic Jihad. So, the narrative that this is all because of the Israeli ‘occupation’ is wrong,” Hacohen added.

“Israel is justified in conducting operations in order to protect its citizens and this is the real issue–not whose bullet killed Abu Akleh,” he said.

The Al Ajazeera reporter was killed during one of a series of IDF missions launched in the aftermath of numerous deadly terrorist attacks against Israelis, some of whose perpetrators came from Jenin.

Dan Diker, director of the Political Warfare Project at the Jerusalem Center for Public Affairs and a former secretary general of the World Jewish Congress, agrees that the devil, in this instance, is not in the details. The need to uncover the facts was relegated to the backburner from the get-go, he said.

“The Abu Akleh incident is an example of Soviet-style propaganda, par excellence,” Diker said. “It is the byproduct of the ideological political warfare that [P.A. chief] Mahmoud Abbas and his predecessor Yasser Arafat learned at the knees of their Soviet paymasters starting in the 1960s. It was a full frontal assault on Jews and the Jewish collective before anyone could even turn around,” he added.

“Abu Akleh worked out of Israel for decades essentially as a political warrior on behalf of the P.A. while operating under the guise of ‘journalist,’” he continued. “You’ll notice that within moments of the event, the Palestinian political warfare machine went into full gear, blaming Israel for ‘murdering’ her. This, before any of the circumstances were known. This is the same P.A. that blamed Israel for infecting Palestinians with coronavirus and for poisoning wells in the West Bank.”

There is a term for this approach in Russian literature, said Diker: “gibridnaya voyna,” which translates into “hybrid warfare”; that is, using all available means to harm your enemy, whether political, economic, cultural, etc. This “360 degree” attack strategy was called “omni-directional warfare” by Israeli scholar Dr. Ofer Fridman.

“And you can judge the effectiveness, given that much of the Western media adopted the Palestinian narrative,” said Diker. “CNN, for example, published an ‘investigative’ report that concluded that Israel ‘targeted’ Abu Akleh. Israel would do well to wake up to this decades-old Palestinian campaign, because failing to do so has placed its legitimacy on life support in many circles.”

Lt. Col. (ret.) Peter Lerner, a former IDF spokesperson who now works as a communications and strategy consultant, emphasized that the Abu Akleh killing has, in fact, become a diplomatic hot potato for Israel. Accordingly, he believes Jerusalem needs to devise a coherent plan ahead of the release of the results of the forensic probe.

“There needs to be a very strong top-down approach, with the core message being that the IDF conducts operations with a view to minimizing casualties and that incidents like the Abu Akleh one are tragic and cannot repeat themselves,” Lerner told JNS. “The IDF initially assumed a ‘we didn’t do it’ line and suggested she was hit by … Palestinian fire, but this quickly morphed into ‘this may have been caused by an Israeli bullet.’”

Now, said Lerner, “there needs to be coordination between government departments in order to determine who will be leading the messaging, so Israel is ready to convey its positions irrespective of how Abu Akleh was actually killed.”