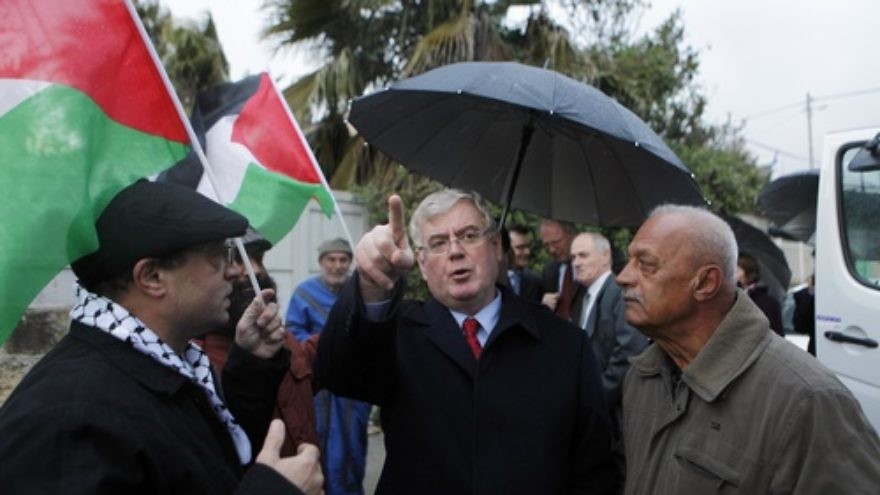 Irish Foreign Minister Eamon Gilmore gestures while talking with Palestinian demonstrators at the weekly gathering in the mostly Arab neighborhood of Sheikh Jarrah in eastern Jerusalem on Jan 27, 2012. Within an Irish government that frequently condemns Israel for its treatment of the Palestinians, Gilmore is one of the most outspoken critics of the Jewish state. Credit: Sliman Khader/FLASH90.
Republish this article
1448 WORDS
Spread the word.
Help JNS grow!
Share now:

(June 23, 2013 / JNS) The Irish and Jewish people share a common history of both suffering cruel persecution and achieving national redemption against immeasurable odds. But today, Ireland is one of Europe’s fiercest critics of Israel. The Irish government and prominent Irish NGOs frequently condemn Israel for its treatment of Palestinians, and they are pushing a boycott of the Jewish state.

Countering this trend is a small, yet passionate, contingent of pro-Israel Irish groups seeking to create more positive relations between these similar nations.

“On a national level, since the late 1950s, Ireland has considered a solution to the conflict in general, and a solution of the Palestinian refugee issue in particular, as one of its top foreign policy priorities in the Middle East,” Irish-born Professor Rory Miller, who is director of the Middle East and Mediterranean Studies Program at King’s College in London and author of Ireland and the Palestine Question 1948-2004, told JNS.org.

Irish-Jewish relations haven’t always been this sour. In the early 20th century, many Irish leaders were sympathetic to the Jewish people, with the Irish drawing heavily on historical parallels with Jews, including their suffering, the large-scale migration of Irish in the 19th century, and their upward struggle for national self-determination against the British.

But following Israel’s independence in 1948, Irish sympathies inexplicably shifted. The Irish no longer viewed Israel as the underdog struggling for its national rights, but instead as a foreign occupier on someone else’s land—the Palestinians—similar to the Irish experience with British control over Northern Ireland.

Ireland did not extend recognition to Israel until 1963 and did not establish an embassy in Tel Aviv until 1996. Furthermore, Ireland was one of the first European countries to call for a Palestinian state in 1980 and has insistently focused on the Palestinian refugee issue.

Today, despite its subordinate position within the European Union behind such larger powers as the U.K., France and Germany, Ireland has played an outsized role as a voice on matters concerning Israel and the Arab-Israeli conflict.

Current Irish Foreign Affairs Minister and Deputy Prime Minister (known as the Tanaiste in Gaelic) Eamon Gilmore has been one of Ireland’s most outspoken critics of Israel. Last month, Gilmore, who is a member of the left-wing Irish Labor Party, announced that Ireland would embark on a campaign to urge fellow EU states to label Israeli products from the West Bank as “settler” products, and to eventually encourage a boycott.

“Settlements on the West Bank are illegal, and therefore the produce of those settlements should be treated as illegal throughout the European Union,” Gilmore said in May, according to the Jerusalem Post.

Ireland’s policies have also targeted Israel on other fronts. In early June, Israeli government officials accused the Irish government of being behind the opposition within the EU to label the military wing of Hezbollah as a terrorist organization.

According to the Jerusalem Post, Ireland’s concerns may be related to the Irish contingent of soldiers within the United Nations Interim Force in Lebanon (UNIFIL), the U.N. peacekeeping mission which patrols southern Lebanon, Hezbollah’s heartland.

Prof. Miller told JNS.org that historical animosity built up between Israel and Ireland over Ireland’s participation in UNIFIL.

“Between 1978 and 2000, over 40,000 Irish troops served in Lebanon, which represented Ireland’s largest-ever military involvement outside its borders. Throughout the 1980s and 1990s, the Irish government regularly clashed with Israel over the treatment of Irish UNIFIL troops, and much public and political sympathy for Israel disappeared when he saw how they treated the Irish soldiers in southern Lebanon,” Miller explained.

Ireland’s large participation in U.N. peacekeeping missions follows the general pattern of Ireland’s post-independence non-aligned foreign policy. Unlike many other western European countries, Ireland is not a member of NATO and has a longstanding policy of military neutrality. In turn, Ireland has instead directed its foreign policy towards a commitment to international organizations such as the U.N. and the EU, and has participated in several major U.N. peacekeeping operations.

In addition to the Irish government being harsher on Israel than some of its EU partners, Ireland’s NGOs have been some of the most powerful anti-Israel groups in Europe.

“The Ireland-Palestine Solidarity Campaign’s (IPSC) is the leading organization engaged in the campaign for BDS in Ireland. In promoting the BDS campaign the IPSC, has in many ways, been more successful in spreading its message than other similar groups across Europe,” Miller said.

In early April, the Teachers’ Union of Ireland became the first academic union in Europe to endorse a full academic boycott of Israel.

But despite the dominance of pro-Palestinian groups in Ireland, there are several small pro-Israel Irish groups, such as Irish Christian Friends of Israel (ICFI), that have attempted to change the tone in Ireland concerning the Jewish state.

ICFI, which was founded in the early 1980s, describes itself as a group of “committed Christians, from various denominations, who love Israel and its peoples.” The group has held several pro-Israel rallies in Ireland and has sponsored fundraising campaigns for Israel, as well as trips to the Jewish state.

“We are Christians from various different churches. We have been going for about 25-30 years,” Paddy Monaghan, president of ICFI, told JNS.org.

Monaghan explained that most Irish people have very open minds and can be persuaded to support Israel more if they are presented with a fair and honest discussion of the issues.

“If Israel put more money in helping to create and mobilize pro-Israel groups, things could improve,” Monaghan said. “While there is some anti-Semitism within Ireland, especially within Muslim immigrant groups, there is a big middle ground that is open to being persuaded either way. A few years ago we put together a campaign for [former Hamas captive] Gilad Shalit that gained thousands of signatures.”

In addition to its charitable endeavors for Israel, ICFI has launched political campaigns to persuade the Irish government to back off on its support for a boycott of Israel.

“We appeal to [Eamon Gilmore] not to use the last EU Foreign Ministers Council meeting to sponsor the labeling of West Bank settlement products and the subsequent proposed ban on them,” ICFI said in a recent press statement.

Groups like ICFI face an uphill battle. In the spring, a small group called Irish4Israel, which was launched in 2010, raised more than $2,000 in 10 days with the help of BlueStar, a pro-Israel advocacy based in San Francisco, to launch a poster campaign in Ireland promoting Israeli tourism. But within 24 hours of being put up, the posters were vandalized by suspected pro-Palestinian groups, the Jewish Chronicle of London reported.

Alan Shatter of the Fine Gael—Ireland’s center-right party from which the country’s current prime minister, Enda Kenny, hails from—is the lone Jewish member of the country’s parliament and has been more supportive of Israel than his fellow legislators.

In an interview with the Jerusalem Post in March, Shatter said it is important to distinguish between Irish NGOs, which are obsessively focused on Israel, and the Irish government, which is attempting to deepen ties with Israel.

In fact, Ireland and Israel enjoy a growing economic relationship. Both economies have experienced strong growth since the 1990s (with the exception of the 2008 financial crisis that briefly damaged Ireland’s economy) in the fields of science and technology.

Despite efforts to boycott Israel, trade between Ireland and Israel has grown significantly. According to Ireland’s The Journal, Israel has become one of Ireland’s fastest-growing trade partners, rising from 26th in 2010 to 14th in 2011.

Additionally, both the Irish and Israeli embassies hold a wide variety of cultural events in each other’s countries. Irish musicians and dancers regularly perform in Israel, while the Israeli embassy in Ireland holds many informational events about Israel and shared Irish-Jewish history. One of the most famous parts of that history is Yitzhak HaLevi Herzog, who was chief rabbi of Ireland’s small Jewish community before becoming Israel’s first Ashkenazi chief rabbi.

But if Israel hopes to once again have Irish eyes smile upon the Jewish state, reaching out to the Irish may require more than state-to-state relations.

“The Arab people and their supporters tend to understand Irish culture better. [The Israelis] often assume that Western people will understand without establishing relationships. But we [in Ireland] are relational people, Israel needs to take the time explain the rightness of their case on a personal level,” ICFI’s Monaghan told JNS.org.