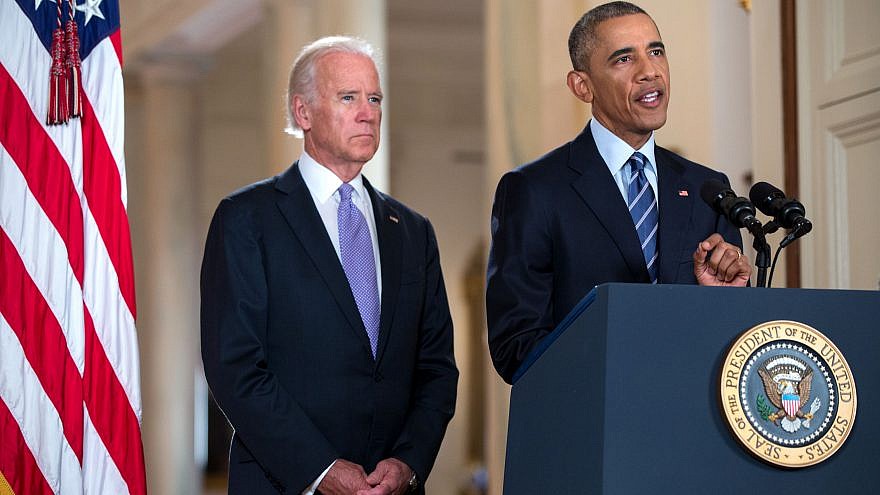 (November 12, 2020 / JNS) One of the top foreign-policy issues President-elect Joe Biden will be forced to address upon taking office in January will be the Iranian threat.

During the campaign trail, in what was seen as a dig at U.S. President Donald Trump’s efforts to apply maximum pressure on Iran through sanctions, Biden said he would handle Iran “the smart way” and would give Iran “a credible path back to diplomacy.” Biden has also said that the United States could rejoin the deal “as a starting point for follow-on negotiations” if Iran commits to full compliance.

But Israel’s security establishment is worried that another Obama-esque approach to Iran will fail a second time and will once again result in a triumphant Iran flush with billions of dollars in cash. Any letting down of the guard could also embolden world leaders eager to turn a blind eye to Iranian violations and hegemonic ambitions in order to seal a deal, regardless of Israeli or Gulf state fears.

Asaf Romirowsky, executive director of Scholars for Peace in the Middle East and a senior non-resident fellow at Bar-Ilan University’s Begin-Sadat Center, told JNS that Biden will “have a hard time disregarding the renewed sanctions on Tehran and their effects.”

“As a veteran politician, Biden has a greater appreciation of the U.S.-Israeli alliance and will not compromise Israeli security,” said Romirowsky. “Moreover, his history with Israel will contribute to his attitude that would presumably be less acrimonious as it was during the Obama years.”

Biden, however, may indeed feel the need to revert back to his old boss’s methods of diplomacy in order to appease Iran.

Iranian President Hassan Rouhani, quoted by the state-run IRNA news agency, said the next U.S. administration must “compensate for past mistakes” and “return to the path of complying with international agreements through respect of international norms.”

‘Not fully cooperating with the IAEA’s investigation’

According to the latest report by U.N. inspectors, Iran has 2,440 kilograms of enriched uranium stockpiles, which far exceeds the 300 kilograms allowed under the 2015 nuclear deal. Experts say that is enough material to make at least two nuclear weapons. The report said that Iran is also enriching uranium to as much as 4.5 percent purity, which is also higher than the limits in the deal. Additionally, Iran has also completed the transfer of a cascade of advanced centrifuges from a plant above ground to an underground site, which can protect the plant from aerial attacks.

What has Israeli experts worried is Iran’s blatant non-compliance with the deal and clear interest in pursuing nuclear weapons. It continues to install advanced centrifuges and is developing its intercontinental ballistic-missile program.

Iran’s lies and deceptions with regard to its intent for its nuclear program, which it says is for peaceful purposes only, have been handily proven by Israel in a number of instances. But each time Israel requested that the international community investigate, Israel was met with a slow reluctance to comply.

In 2018, Mossad agents broke into Iran’s secret nuclear archives in the heart of Tehran and walked away with about 50,000 pages and 163 compact discs worth of intelligence proving Iran had misled the United States and Europe about its intentions even while it negotiated the Joint Comprehensive Plan of Action, or JCPOA.

The International Atomic Energy Agency (IAEA) was slow to respond.

In his 2018 address to the U.N. General Assembly, Israeli Prime Minister Benjamin Netanyahu urged the international community to investigate what he said was a secret nuclear facility in the Turquzabad district of Tehran.

Again, the IAEA took its time investigating, but eventually, it did demand an explanation from Iran over why traces of nuclear particles were discovered at the site.

According to the United States Institute of Peace (USIP), “besides its public denials, Iran does not appear to be fully cooperating with the IAEA’s investigation into the site.”

The USIP also said that the IAEA “continues to question Iran about the site,” but the agency had “not received an entirely satisfactory reply.”

Yet even with clear evidence of Iran’s rogue behavior, Romirowsky said Biden, like Obama, “believes that a deal is still the best way to prevent a nuclear Iran.”

Romirowsky warned that Biden is entering “a very different Middle East landscape that he and his advisers cannot ignore, specifically regarding Israel, and its newfound Arab relations and collaboration in particular, as it relates to the threat of Iran illustrated by security and military ties between Israel, the Egyptians and the Saudis.”

‘Their best interests in mind’

Uzi Rabi, director of the Moshe Dayan Center for Middle Eastern Studies at Tel Aviv University, told JNS he is concerned that Israel will soon find itself “at the eleventh hour” with regard to Iran’s nuclear weapons program. “We are in a very delicate situation,” he said.

He noted Biden’s intentions to negotiate with Iran, as well as Tehran’s eagerness to reach an agreement due in part to its poor economic plight.

“The question is what sort of agreement Biden has in mind,” said Rabi. “Will it have modifications with regard to Iran’s ballistic-missile program, Iran’s aggression in the region and bringing in more monitoring? That would be great.”

The JCPOA ignored or mismanaged all three of these issues.

Rabi said he hopes that the Americans have “learned a lesson from what happened before” regarding Iran’s disingenuous approach to negotiating. He also said the Americans “cannot get to the negotiating table and play it by ear. They must have a clear end game.”

He explained that the important elements that were left out of the deal, such as Iran’s ballistic-missile program, its hostile behavior in the Middle East, and improved inspections, should be included in any new agreement.

“One should hope that Biden and his team is coming up with a fresh approach about how to deal with Iran,” he said.

Rabi said that behind the scenes, Gulf state leaders fear that Biden will follow Obama’s appeasement approach and will want to lift sanctions and reduce pressure on Iran.

This mistaken approach could have a negative “snowball effect,” he warned. “Biden should bear this in mind and internalize what has happened in the Middle East.”

“If Biden performs in a successful way when it comes to the Iran file, that will make life easier for everyone in the Middle East, including the United States. If the opposite happens, you can definitely expect a negative snowball effect,” he stated.

Rabi echoed Romirowsky, suggesting that Israel needs a joint agreement with Egypt, Saudi Arabia and the United Arab Emirates by which they can influence some changes to any new Iran deal if and when it happens.

In order to try and be involved in any new negotiations, Israel and its Arab partners should “strive for a dialogue with those in the future Biden administration,” said Rabi.

Romirowsky added that “Iran and its proxies are still the largest destabilizing factors to the region.”

As such, he said, “a Biden administration will contend with a more unified Middle East—a Sunni Crescent that includes Israel. This will require an understanding of Israeli deterrence bolstered by an Israeli Qualitative Military Edge. Trump’s policies towards Israel gave Israel a sense of relief and gratitude post-Obama.”

According to Romirowsky, moving forward, Biden will need to “convince Israelis that he will have their best interests in mind when it comes to Iran.”