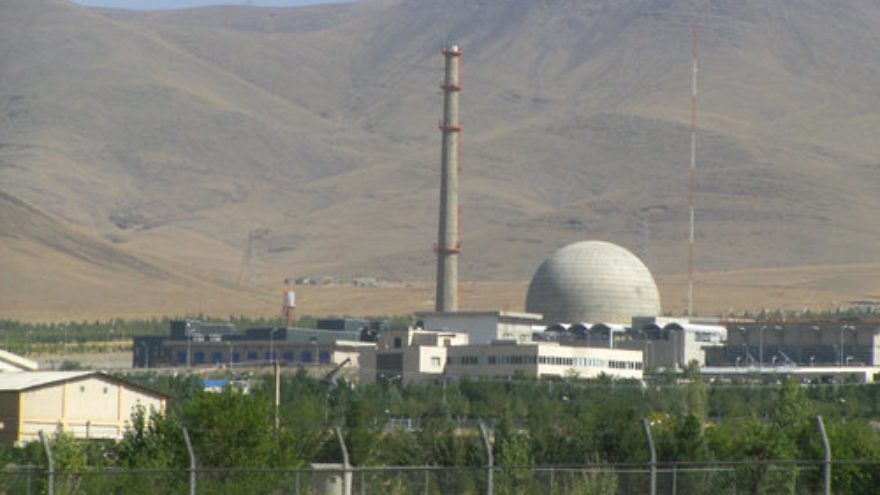 (November 14, 2016 / JNS) The election victory by Donald Trump, a billionaire businessman who has never held political office and is a neophyte on foreign policy, has left many observers wondering about the future direction of U.S. policy abroad. Against that backdrop, supporters of Israel are immediately focusing attention on Trump’s approach to the much-discussed Iran nuclear deal, which was approved by the Obama administration and five other Western governments in July 2015.

As a presidential candidate, Trump made a variety of comments regarding his opposition to the Iran nuclear deal, ranging from calls for stronger inspections to entirely nixing the Obama administration’s signing of the pact.

“You’d have to have onsite inspections anytime, anywhere, to start off with, which we don’t have at all. The whole deal is a terrible deal. There’s no way the Iranians are going to adhere to any deal we make,” Trump said in an interview with JNS.org in June 2015, shortly after he had announced his presidential candidacy and before the Iran deal was signed.

Trump went further in his opposition to the deal during a speech at last March’s American Israel Public Affairs Committee conference, saying he would “dismantle” the nuclear deal.

“My number one priority is to dismantle the disastrous deal with Iran. I have been in business a long time…this deal is catastrophic for Israel, for America, for the whole of the Middle East…We have rewarded the world’s leading state sponsor of terror with $150 billion [in sanctions relief], and we received absolutely nothing in return,” he said.

President-elect Trump “has cultivated a fair amount of ambiguity towards how he would approach the Iranian nuclear deal,” said Behnam Ben Taleblu, a senior Iran analyst at the Foundation for Defense of Democracies (FDD) think tank.

“Whether this was intentional or not cannot be deduced at this point,” Ben Taleblu told JNS.org. “This ambiguity is best exemplified by Trump’s claims of both renegotiating and tearing up the JCPOA (Joint Comprehensive Plan of Action, the Iran deal’s formal name).”

Shortly after Trump’s victory, Iranian President Hassan Rouhani made it clear that Trump would not be able to unilaterally destroy the deal.

“Iran’s understanding in the nuclear deal was that the accord was not concluded with one country or government but was approved by a resolution of the U.N. Security Council and there is no possibility that it can be changed by a single government,” Rouhani told his cabinet, Iranian state TV reported.

While Trump has not commented on the deal following the election, one of his top foreign political advisers, Walid Phares, offered some insight into how the president-elect might handle the nuclear agreement, saying it will likely be renegotiated by Trump rather than ripped up.

“Ripping up is maybe a too strong of word….He will take the agreement, review it, send it to Congress, demand from the Iranians to restore a few issues or change a few issues, and there will be a discussion,” Phares told BBC Radio. “It could be a tense discussion but the agreement as is right now—$150 billion to the Iranian regime without receiving much in return and increasing intervention in four countries—that is not going to be accepted by the Trump administration.”

FDD’s Ben Taleblu believes that Trump will likely resolve to keep the accord intact and instead prioritize cracking down on Iran’s other troubling behavior in the Middle East, such as the Islamic Republic’s sponsorship of terrorism, something for which the Obama administration has often been criticized for not addressing.

“I would say [Trump] will keep the accord but feel less restricted about using coercive financial measures to target the rest of Iran’s bad behavior. Whether this is rolled into a larger attempt to renegotiate the accord remains to be seen, as that would involve coordination with the other P5+1 members,” Ben Taleblu told JNS.org.

At the same time, Trump may seek a tougher line on Iran’s compliance with the current deal.

A recent report compiled by the International Atomic Energy Agency (IAEA), the United Nations’ nuclear watchdog, found that while Iran has largely struck to its commitments under the deal to not enrich uranium above low purities and to keep its stockpile of uranium below agreed levels, the Islamic Republic has still violated the nuclear agreement. According to the IAEA, Iran surpassed the 130 metric-tonne threshold for the production of heavy water, a material that is used as a moderator in nuclear reactors. Iran has 130.1 tonnes of heavy water, the IAEA report said.

“On 2 November 2016, the [IAEA] director general expressed concerns related to Iran’s stock of heavy water to the vice president of Iran and president of the Atomic Energy Organization of Iran…Ali Akbar Salehi,” the IAEA said in a confidential report, Reutersreported.

This was the second time since the nuclear deal was signed that Iran was found to have exceeded the heavy water limit—in February, Iran had 130.9 tonnes of the material. Unlike the hard limit on uranium imposed by the deal, any excess heavy water is available for export on the international market. As such, the Obama administration did not find any issue with Iran’s heavy water production.

“It’s important to note that Iran made no effort to hide this, hide what it was doing from the IAEA,” U.S. State Department spokesman Mark Toner said.

As far as the Iran deal is concerned, there are inherent challenges with inspections and enforcement that may pose problems for a Trump administration, Ben Taleblu explained.

“The JCPOA set quite a low bar for Iranian compliance,” he told JNS.org.

For instance, said Ben Taleblu, “a violation of the deal requires something called ‘significant non-performance’ to occur, which is a vague term. But while the IAEA has offered less data about the Iranian program in the aftermath of the deal, it has routinely attested that Iran was fulfilling its deal related obligations.”

As such, Ben Taleblu believes that Iran has been “flouting the spirit of the deal,” and the issue of the Islamic Republic’s heavy water production indicates it is “engaging in incremental cheating.”

“This reflects poorly on the deal, as it has no mechanism to formerly punish this,” he said.

Regardless of what President-elect Trump will choose to do vis-à-vis the nuclear deal, Iran will also pose a threat to U.S. interests in the Middle East through its direct involvement in Syria, Iraq, Yemen, and elsewhere, as well as through its threats to Israel, America’s closest ally in the region.

“Given the broad range of issues that separate the U.S. and Iran, I think it is fair to say that Tehran will continue to pose a national security challenge to the next American administration,” Ben Taleblu said.

“It too soon to speculate how a different U.S. policy in Syria or other theaters of the Middle East would affect relations with Tehran,” he added, “but Iranian hardliners have so far been trying to recast this entire election to their advantage.”