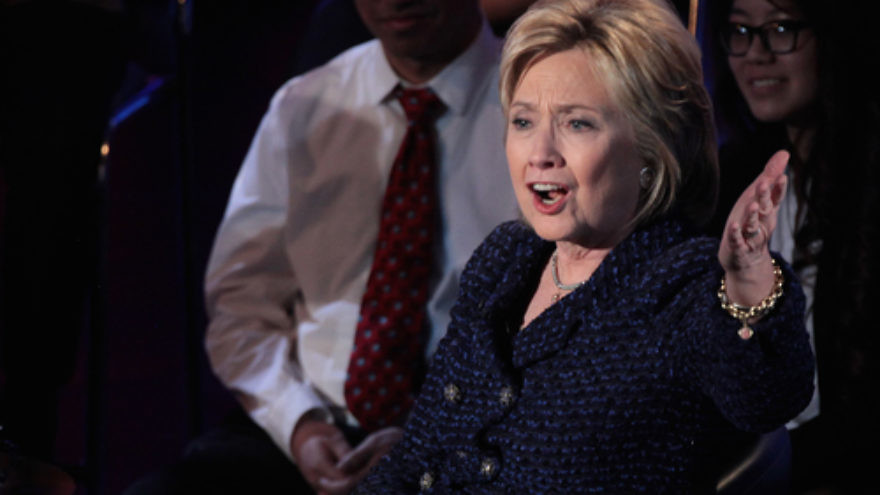 While the Democratic Party geared up for the July 8 discussion of its national platform, which included a review of its position on the Israeli-Palestinian conflict, some political analysts feared that Sanders’s more critical views on the Jewish state may have left their mark on Clinton, the presumptive Democratic nominee. As Foreign Policy reported earlier this month, the analysts also fear that longstanding bipartisan support for Israel might be waning in response to Sanders’s influence on the Democrats.

It is evident in the “rhetoric and positioning that Hillary Clinton has heard [Sanders’s] message loud and clear,” political strategist David Axelrod, a former adviser to President Barack Obama, told Politico, referencing Sanders’s months-long primary campaign in which he assembled a large following around goals such as tackling corruption on Wall Street, taking on the Washington establishment, and calling for campaign finance reform.

“It’s reflected in her messaging and very specific policies,” Axelrod said, citing tweaks to the Clinton campaign’s messaging and policies on issues such as the minimum wage, trade, or gun reform.

On Israel, Sanders has taken on a far-left tone during his campaign, including by criticizing Israel’s presence and policies in the disputed territories, as well as by referring to the Israeli army’s Gaza operation during its 2014 war with Hamas as “indiscriminate.” He also inflated the number of Palestinian civilian deaths in that same conflict at least sevenfold—to 10,000—in an interview with the New York Daily News, and temporarily hired a Jewish outreach coordinator who is active in the self-described “pro-Israel, pro-peace” lobby J Street and the “Open Hillel” movement—both of which have been criticized in the Jewish community for ignoring Israeli grievances in the Israeli-Palestinian conflict and whitewashing Palestinian terrorism.

The possibility that Clinton might adopt similar rhetoric or action on Israel to appeal to Sanders’s voters is “definitely something I am concerned about,” said Tevi Troy, a presidential historian and former White House aide for the George W. Bush administration, and author of the forthcoming book “Shall We Wake the President? Two Centuries of Disaster Management from the Oval Office.”

“I will be watching carefully to see what happens with the platform and which, if any, Sanders aides join the Clinton team post-convention,” Troy told JNS.org.

As the Democratic Platform Drafting Committee gets ready to ratify its platform at the Democratic National Convention in late July, pro-Palestinian activist and Sanders-appointed committee member James Zogby told ABC News last week that “there will be a re-do of inserting the word ‘occupation’ and ‘settlements’ into the platform.” Yet in its subsequent meeting in Orlando, Fla., the platform committee voted down those proposed changes, 95-73, instead keeping existing language calling for a “two-state solution of the Israel-Palestinian conflict” that protects Israel’s security and borders, but also gives the Palestinians “independence, sovereignty, and dignity.”

The rejection of the new language likely occurred in large part due to the efforts of Clinton supporters. CNN reported that the move spurred loud boos, with one man being escorted out by police after shouting that the Democrats had “sold out to AIPAC (the American Israel Public Affairs Committee lobby).” In a separate 95-72 vote, the platform committee also rejected an amendment to “rebuild Gaza, which the U.N. warns could be uninhabitable by 2020, and where poverty and hopelessness undermine peace and security for both Palestinians and Israelis.”

Steve Rabinowitz, a Jewish supporter of Hillary Clinton who heads the Bluelight Strategies public relations firm, is not surprised by the platform committee’s decisions. Rabinowitz—who has worked on the national staffs of nine U.S. presidential campaigns and served as White House director of design and productions for former President Bill Clinton—told JNS.org that he is “thrilled” with Clinton’s views on Israel and believes there has rarely been a candidate with “better defined” support for the Jewish state.

While he does concede that Sanders has influenced Clinton to make some “nuanced” campaign rhetoric changes on some of the other issues that Sanders has championed, Rabinowitz does not believe that Clinton is “going to shift at all” on Israel.

Jeremy Burton, executive director of the Jewish Community Relations Council (JCRC) of Greater Boston, echoed Rabinowitz and pointed to what Clinton said in March in her speech at the American Israel Public Affairs Committee (AIPAC) conference, where she committed to an “unwavering, unshakable commitment” to the U.S. alliance with Israel and recognized the threat of “the growing effort to delegitimize Israel on the world stage.”

It is important to note that Clinton “gave that speech to AIPAC in March, well into the primary season and long after it had become clear that Sanders had some traction in parts of the Democratic Party,” Burton said.

But independently of Sanders, and before the July 8 platform committee vote, Clinton’s history on Israel has come with its own controversial moments, as JNS.org recounted in a timeline published earlier this year. While she has condemned Palestinian violence against Israelis both during and after her time holding public office, one passage in her 2014 memoir “Hard Choices” characterized Israel as an occupying force. In 1999, Clinton came under fire for her embrace of Suha Arafat, the wife of former Palestinian leader Yasser Arafat, after Suha had made remarks accusing Israel of poisoning the West Bank’s water supply and land.

While Clinton has written that she considers Jerusalem the “eternal and indivisible capital of Israel,” if she is elected president, Troy told JNS.org that he is “not at all confident that a Clinton administration would openly declare Jerusalem as the capital of Israel, and it would certainly not move the U.S. embassy there.”

In her campaign, Clinton is likely to “repeatedly zig toward Sanders’s anti-Israel position and zag toward the pro-Israel views of most voters,” said Joshua Muravchik, a faculty member at The Institute of World Politics and author of the 2014 book “Making David Into Goliath: How the World Turned Against Israel.”

Despite the rejection of the pro-Palestinian language proposed by Sanders supporters at the committee meeting, Muravchik told JNS.org that Sanders has “clearly pulled the [Democratic] Party further to the left, and left today means anti-Israel.”

“The liberal wing of the Democratic Party is now clearly anti-Israel,” he added, citing Sanders’s choices of Israel critics Zogby and Cornel West to represent him on the platform committee. West is an activist in the anti-Israel Boycott, Divestment and Sanctions movement.

“The liberal wing is increasingly influential in the party. However, the majority of Americans are still staunchly pro-Israel, and this will prevent Hillary’s moving too far toward an anti-Israel position,” Muravchik said.

Similarly, Troy pointed to some factors that may be offsetting a potential move to the left on Israel by the Clinton campaign, such as Israel’s continued and general popularity among the American public, the importance of Israel as both a U.S. ally and a liberal democracy in the largely undemocratic Middle East region, the significance of the Jewish vote in certain key election states, and Jewish financial support for many Democrats.

Another factor could be Sen. Elizabeth Warren (D-Mass.), a possible Clinton running mate with whom the presumptive nominee has recently been jointly campaigning. Though Warren agrees with Sanders on many key issues, on Israel “Warren has throughout her time in the Senate publicly supported the U.S.-Israel relationship,” said the Boston-area JCRC’s Burton, who has briefed Warren in person about Israel and Jewish issues several times.

“She has spoken in support of Israel’s right and responsibility to protect itself from terrorism. She has rejected delegitimizing actions against Israel, including economic and cultural warfare,” he added, noting that in the fall of 2014, Israel was the first country that Warren visited after taking office.

But Muravchik argued that if Warren is selected as Clinton’s running mate, she could actually sway Clinton away from supporting Israel. He criticized Warren for adopting “a stance of even-handed neutrality between Israel and its deadly enemies,” citing his own op-ed in 2014 about an incident in which Warren told a Tufts University audience that a comparison between Israeli and Nazi Germany actions is “fair.”

Regardless of who Clinton’s chooses as a vice presidential candidate, Rabinowitz said that at this stage of the election, she “is the party.”

“Now that Clinton is the presumptive nominee, the [Democratic] Party reflects her views,” he said.

“She is who she is,” added Rabinowitz, noting that Sanders supporters will find many other elements of her platform “that they care even more about” than Israel.