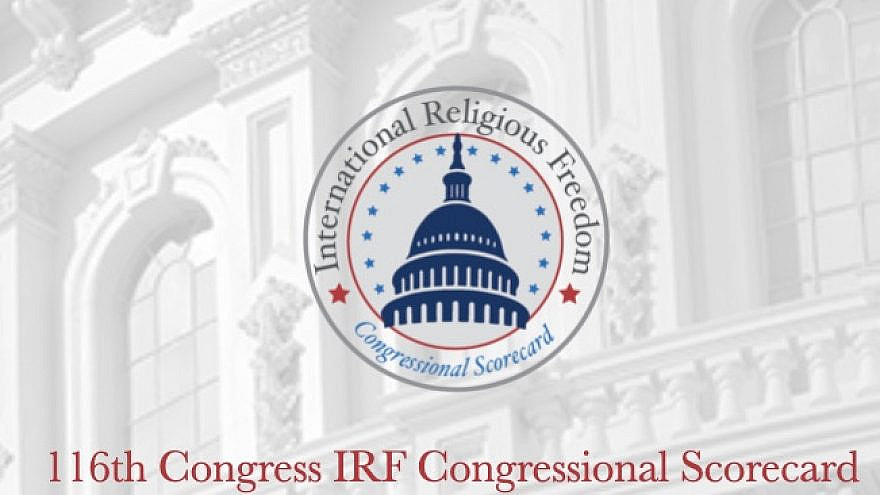 (May 12, 2021, Washington, DC, JNS Wire) Embattled religious minorities and dissenting members of majority religious communities suffer extraordinarily – including harassment, discrimination, and genocide — as  freedom of religion or belief has deteriorated worldwide. Congress has been an advocate for this essential human right and sought to ensure continued support for it as a central focus of U.S. foreign policy.

21Wilberforce tracks the progress of Congressional efforts regarding international religious freedom or belief and has just published the International Religious Freedom Congressional Scorecard for the 116th Congress.

The scorecard evaluates Members of Congress on their public support for international religious freedom or belief during the 116th Congress based on their sponsorship of bills, resolutions, and amendments, related caucus work, and votes in the House and the Senate. Sixty-two legislators (38 Democrats and 24 Republicans) are recognized as “Notable Leaders” for their efforts. Senator Marco Rubio (R-FL) and Representative Brad Sherman (D-CA) earned the overall top scores in each body.

“The freedom to practice or live out one’s faith according to one’s conscience is a sacred right that no government has the authority to take away. Tragically, this fundamental human right remains under constant assault around the world,” Senator Rubio said. “I am proud to continue to advance policies that ensure protections for freedom of religion or belief, as well as impose serious consequences on the governments and non-state actors who engage in gross abuses of religious freedom.”

21Wilberforce scored thirty-seven (37) items in the Senate and fifty-four (54) items in the House from the 116th Congress. Out of a combined 91 items scored, the largest number, 47, focused on Asia , over half of all the actions scored. Two laws related to international religious freedom passed with an overwhelming majority and were enacted into law during the 116th Congress:  the Hong Kong Human Rights and Democracy Act of 2019 and the Uyghur Human Rights Policy Act of 2020.

Dr. Randel Everett, President of 21Wilberforce said, “I am pleased that results in this Scorecard demonstrate that international religious freedom issues continue to transcend the partisan divide. The scorecard  encourages legislators to take even bolder steps in support of this freedom and it provides citizens with a nonpartisan, concise summary of public actions Congress has taken on issues related to international religious freedom.”

The 116th Congress IRF Congressional Scorecard can be viewed at: https://IRFscorecard.org

21Wilberforce
21Wilberforce is a Christian human rights organization dedicated to defending the universal rights of religion, belief, and conscience for all people. Our vision is to empower people to collaboratively support persecuted communities, challenge repression, and expand freedom of religion and belief globally.
Publish your organization's press release on JNS Wire
Releases published on the JNS Wire are communicated and paid for by third parties. Jewish News Syndicate, and any of its distribution partners, take zero responsibility for the accuracy of any content published in any press release. All the statements, opinions, figures in text or multimedia including photos or videos included in each release are presented solely by the sponsoring organization, and in no way reflect the views or recommendation of Jewish News Syndicate or any of its partners. If you believe any of the content in a release published on JNS Wire is offensive or abusive, please report a release.