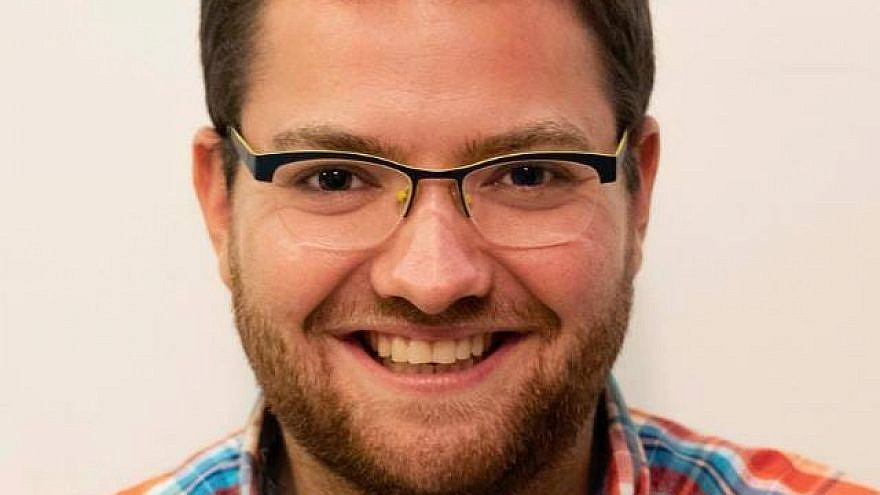 (May 12, 2021, Jerusalem, JNS Wire) As an Israeli – and one who served in a combat unit — I’ve experienced my share of conflicting emotions and complex situations. Yesterday was just such a day of dualities. From early in the morning I was following reports of the events unfolding in Jerusalem, just a few blocks from where I live. Tension which had been building for weeks began coming to a head. There is a long list of factors which have contributed to the situation, but it isn’t happenstance that things began getting out of hand yesterday. Yesterday was Yom Yerushalayim – the day we celebrate our liberation and unification of Jerusalem, the eternal city of the Jewish people, after thousands of years apart.

The riots in East Jerusalem had been going on for days leading up to Yom Yerushalayim. One happened right outside the Hebrew U campus. Three hundred rioters stood throwing rocks at police at the roundabout by the gate to campus. Luckily, most of my courses, and those of my friends, are still on Zoom, and as far as I know, no students were hurt.

On the Temple Mount itself, riot preparations had been made over the last several days. Rocks and boulders had been stockpiled, not just out on the plaza, but in the dome of the rock itself. Barricades against the police were constructed. Honestly, no matter what you think, the desecration of the holiest spot on the planet is nothing but heart-wrenching.

Like most situations though, its hard to fully grasp without the proper context. But the context for the recent events is more complicated than most. It is both thousands of years old, and hot-off-the-press current affairs. Couple King David’s coronation in Jerusalem with the talks currently being held in Vienna and what do you get?

Not confused in the sense of “right and wrong” — a question which stands at the center of constant Israeli introspection. Rather, it is a confusion born of different primal emotions vying for attention. Let me put it this way: at the core of who I am stands my Jewish identity. It is from that point that the powerful emotions of historic significance and pride I usually experience on Yom Yerushalayim blossom. The feeling of privilege in belonging to the Jewish people and our long history deeply intertwined with that of Jerusalem makes for a powerful day. A day of redemption.

Yet this year, as I followed the unfolding events, the same place within me gave sustenance to another entire slew of emotions. As stone throwing began, and people began getting injured, as the Israeli government decided to prohibit Jewish ascension to the temple mount, a familiar frustration set in.

Anyone who has ever taken to social media in an attempt to defend Israel will understand this. There are so many lies and misinformation disseminated about Israel on a regular basis that the situation isn’t new to me. But, yesterday, when a video of an Israeli car plowing into a group of Palestinians in East Jerusalem was posted, it was taken to a new extreme. The full context is that a group of Palestinians threw stones at a car, which caused the driver to lose control and crash into them. But the incident didn’t end there. The full video captured by surveillance cameras and released a few hours later by the police shows how, following the crash, more than ten Palestinian rioters attempted to lynch the Jewish driver. The driver was only saved in the nick of time by an Israeli policeman who was forced to shoot in the air.

The selective doctoring done to the video has made it look like a deliberate attempt by an Israeli to run over Palestinians. That version of events was posted and reshared hundreds of times before the truth “got on its pants.” And so, in addition to contending with the internal situation, Israelis are also constantly on the receiving end of very critical international public opinion.

And while one side of the conflict keeps pushing a simplistic version of events, skewed in a way that serves their agenda, the general sentiment of the Israeli response, one which I am trying to encapsulate here- “Its complicated”, is just not catchy or flashy enough. The number of people who are content to criticize Israel based off a twisted version of events, who ignore the complexities inherent in practically everything that goes on in this little miracle of a country, is frustrating almost to the point of despair.

But there is no room for despair, only perseverance.

I was sitting at work when I read that Hamas threatened Israel if it didn’t stop its activities on the temple mount. What activities? The mitigation of a riot Hamas itself had spent weeks fomenting. Rocks and Molotov cocktail thrown by Palestinians. A tree caught fire. There are plenty of pictures taken late yesterday evening of Jewish kids dancing down in the Kotel Plaza while above them on the temple mount a column of flame can be seen. Just another attempt to show how callous Israelis are. As if they dance while the Temple Mount burns. Its ridiculous. They danced because we cannot give in to terror. And when certain elements choose a day of celebration and try to turn it to ash in our mouths, we must not let them. We must persevere.

But, truth be told, in addition to the anger and resentment, yesterday (and today) was also laced with apprehension. My heart skipped a beat as I realized that what I was hearing through my office window was a red alert, a siren. I had just enough time to make it to a sheltered location before it skipped another beat, as I heard the boom when the Iron Dome intercepted one of the enemy rockets. But my real fear is always reserved for family and friends.

One of my sisters suffers from PTSD, another present from Hamas, residue from her time in the IDF. I spoke to her after the explosion. She sounded shaken. Many Israelis suffer the same. Some grew up in the southern cities, under constant threat of fire. There are Brothers in my AEPi chapter who come from there, whose families still live in those areas. 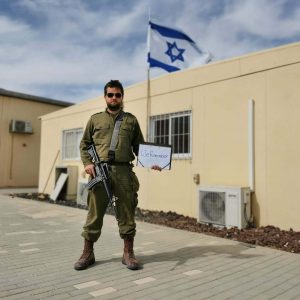 Brother Harow in his IDF uniform on Yom HaShoah

Recently, my chapter has finally been able to restart “normal” activities now that COVID is on the downswing and all of us have been vaccinated. Yet, these events have ramifications for us as well. We had a hike planned for Yom Yerushalayim- canceled. We had a new member induction ceremony arranged for tonight- postponed. If the situation continues, we may have to drop more plans too. One of the Brothers I spoke to only a few hours ago has been called up for reserve duty. My own reserve officer wrote to me telling me we might be called up too. Doubtless, other Brothers got similar messages. That is life here in Israel.

Tonight, as I write this and hundreds of rockets are raining down on Metropolitan Tel Aviv, I checked in with the heads of the other AEPi chapters in Israel. Thank G-d they and the Brothers in their chapters are okay.

Unfortunately, it is not everyone who is okay. My heart goes out to the families of those killed today by rocket fire, and those who have been injured. The same goes for any innocents killed on the other side of the border, held hostage by a terror organization. I know firsthand what lengths the IDF goes to in preventing such casualties, but at the end of the day, nothing is black and white, and even doing the right thing has unwanted consequences.

I don’t know If my words have been able to accurately capture some of what I’m feeling. It’s hard to convey what bubbled up as I walked home from work, barely an hour after experiencing the siren in Jerusalem, and saw hundreds of high school kids, in blue and white, parading up the streets of Jerusalem singing songs of Jerusalem and laughing. Living the fulfilment of thousand-year-old prophecies is not a sentiment that is always at the fore of my mind, but every so often it bursts forth. Even with everything going on, I feel in my soul that Israel is a blessing, and I am blessed to live here. 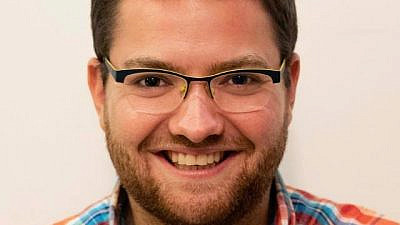 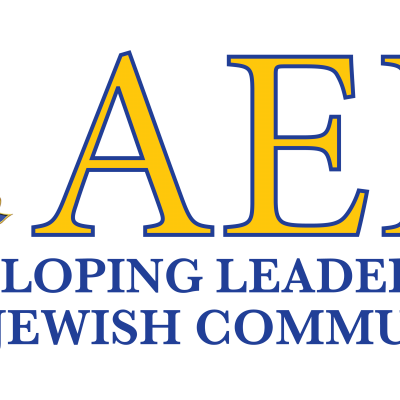 Alpha Epsilon Pi
Alpha Epsilon Pi is the world’s leading Jewish college fraternity, operating chapters on more than 175 college campuses in five countries. Founded in 1913, AEPi has more than 90,000 living alumni. While non-discriminatory, the fraternity’s mission – developing the future leaders of the Jewish communities – is demonstrated every day through acts of brotherhood, Tzedakah (charity), social awareness and support for Jewish communities and Israel.
Publish your organization's press release on JNS Wire
Releases published on the JNS Wire are communicated and paid for by third parties. Jewish News Syndicate, and any of its distribution partners, take zero responsibility for the accuracy of any content published in any press release. All the statements, opinions, figures in text or multimedia including photos or videos included in each release are presented solely by the sponsoring organization, and in no way reflect the views or recommendation of Jewish News Syndicate or any of its partners. If you believe any of the content in a release published on JNS Wire is offensive or abusive, please report a release.