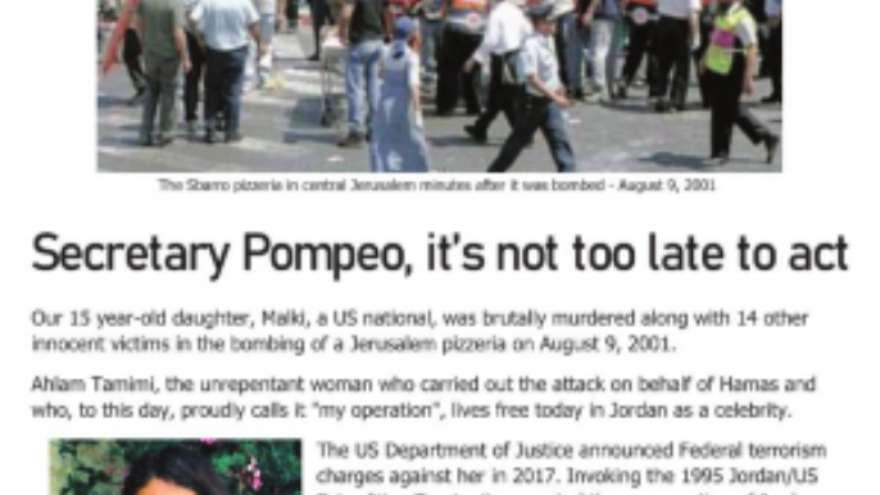 A November 18, 2020 ad calling on the Trump administration to press Jordan for the extradition of Ahlam Tamimi, a terrorist who killed two Americans in a bombing in Jerusalem in 2001.
Spread the word.
Help JNS grow!
Share now:
Media Contact
Arnold Roth
arnold.roth@gmail.com
972-54-560-1002

(November 19, 2020, JNS Wire) A front-page Jerusalem Post ad timed to coincide with U.S. Secretary of State Mike Pompeo’s visit to Israel this week (Nov. 18-20) is a family’s desperate call to the Trump administration to press Jordan for the extradition of the terrorist who killed two Americans in a bombing in Jerusalem in 2001. One of the American victims was the Roths’ daughter.

The ad, in the form of an open letter to Secretary Pompeo, is signed by Frimet and  Arnold Roth of Jerusalem. Their 15 year-old daughter Malki was brutally murdered along with fourteen others in the bombing of a Jerusalem pizzeria on August 9, 2001.  Ahlam Tamimi, the unrepentant Jordanian terrorist behind the bombing, remains a free woman in Jordan — a U.S. ally and aid recipient that refuses to honor its treaty obligation  to extradite her.

“Secretary Pompeo, it’s not too late to act,” reads the banner headline that will appear November 19 on the front page of The Jerusalem Post. “We ask that you do what needs to be done so that Tamimi is at last brought to justice in Washington.”

Next August will mark the 20th anniversary of the lunchtime bombing in Israeli capital’s bustling downtown area which also injured and maimed 130 men, women and mostly children. Since 2012, the Roths have campaigned for Tamimi’s extradition, appealing to successive U.S. administrations and to Congress, to no avail.

Their appeals to the Secretary of State over the past four years have so far gone  unanswered. A 2020 petition launched by the Roth family calls upon Secretary Pompeo to press for Tamimi’s extradition. It has so far  attracted more than 12,000 signatures.

With the transition of US administrations now underway, Arnold Roth, an Australian, and Frimet, an American have focused their hopes on Secretary Pompeo.

“As bereaved parents denied justice for so many years, we ask that you do what needs to be done so that Tamimi is at last brought to justice in Washington” say the Roths in the ad.

About The Publishers
The Roth Family
Publish your organization's press release on JNS Wire
Releases published on the JNS Wire are communicated and paid for by third parties. Jewish News Syndicate, and any of its distribution partners, take zero responsibility for the accuracy of any content published in any press release. All the statements, opinions, figures in text or multimedia including photos or videos included in each release are presented solely by the sponsoring organization, and in no way reflect the views or recommendation of Jewish News Syndicate or any of its partners. If you believe any of the content in a release published on JNS Wire is offensive or abusive, please report a release.