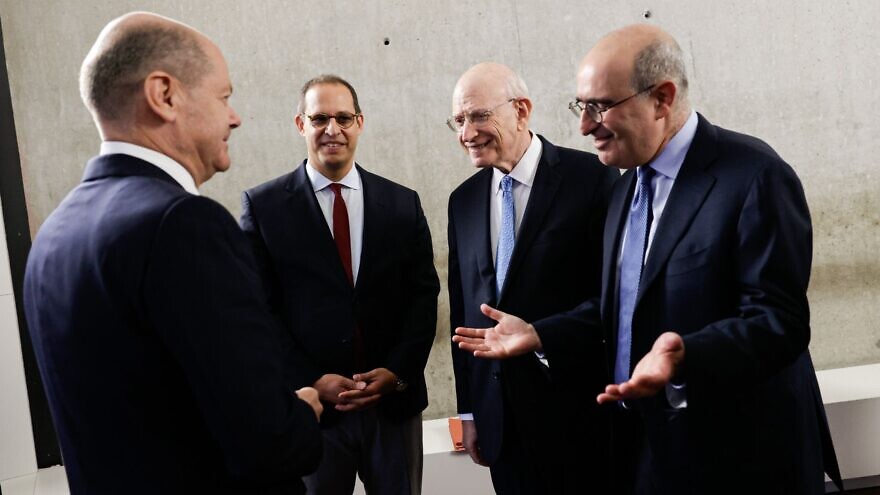 (September 15, 2022, New York, New York, JNS Wire) On Thursday, at the invitation of the German Federal Minister of Finance, Mr. Christian Lindner, the Claims Conference will join German Chancellor Olaf Scholz and Israel’s Minister for Social Equality, Meirav Cohen, along with several hundred guests, to commemorate the 70th anniversary of the signing of the indemnification agreement making it possible for Holocaust survivors to receive a measure of justice —The Luxembourg Agreements.

“This historic event, the 70th anniversary of the signing of the Luxembourg Agreements, is cause for commemoration and reflection,” said Gideon Taylor, President of the Claims Conference. “The extermination of European Jews by the Nazis left a horrific chasm, not only in global Jewry, but in global humanity. These agreements laid the groundwork for compensation and restitution for those survivors who had lost everything and continue to serve as the foundation for the ongoing negotiations on behalf of the estimated 280,00 Holocaust survivors living around the world.”

On September 10, 1952, groundbreaking agreements on compensation payments for survivors of Nazi persecution during World War II and to the State of Israel were concluded in the City Hall of Luxembourg. The landmark agreements were negotiated and ultimately agreed to between the newly formed State of Israel, the Federal Republic of Germany as the legal successor to the German Reich, and the Conference on Jewish Material Claims Against Germany (Claims Conference) formed by 23 major global Jewish organizations to negotiate on behalf of the world’s Holocaust survivors. The agreements created the basis for all subsequent compensations for Nazi persecution.

Today, the three signatory parties to the historic agreements will be represented at a ceremony in Berlin at the Jewish Museum. German Chancellor Olaf Scholz will speak of the importance of the agreements and the special responsibility Germany bears for the past, the present, and for the future. “The Luxembourg Agreements were fundamental and led to financial compensation in the amount of more than €80 billion Germany has paid by the end of 2021. The payments to survivors and the home care program are very close to our heart and recently we see the increasing importance of Holocaust education,” stated Scholz.

Claims Conference President Gideon Taylor and Claims Conference Chief Negotiator Ambassador Stuart Eizenstat also will speak, emphasizing the consequences and effects of the agreements for Holocaust survivors around the world. The State of Israel will be represented by the Minister for Social Equality, Meirav Cohen. Highly anticipated remarks of the day are that of Holocaust survivor Ambassador Colette Avital. A child survivor of the Holocaust, Ambassador Avital survived by living in hiding in Bucharest with her mother. A long-time member of the Claims Conference Board and negotiating team, Ambassador Avital maintained a long career as a member of the Israeli Ministry of Foreign Affairs (MFA).

Claims Conference Chief Negotiator Ambassador Stuart Ambassador Eizenstat emphasized, “The Luxembourg Agreements laid the foundation for all subsequent compensations for survivors of Nazi persecution. Never before in human history has the defeated power paid compensation to civilians for losses and suffering. It is a monumental achievement, which shows the commitment of the German people to recognize the evils of their former Nazi society.”

“It took truly great and far-sighted leadership to sit down at the table only a few years after the Holocaust and negotiate the unimaginable. They laid the groundwork for the results we are announcing today of more than $1.2 billion in 2023 for compensation and social welfare services for Holocaust survivors,” stated Claims Conference Executive Vice President Greg Schneider. “We could not do the work we do today – work to ensure every Holocaust survivor is able to live their life in the dignity that was taken from them in their youth – if each of those leaders had not stepped up during this moment in history.”

The Luxembourg negotiations and resulting compensation agreements laid the groundwork on which the Claims Conference continues to conduct negotiations with the Federal Ministry of Finance in Germany.

To be announced at the event in Berlin today are the negotiation outcomes for the following areas:

For more information about the Claims Conference, please visit: www.claimscon.org

Republish this article
About The Publishers
Conference on Jewish Material Claims Against Germany (Claims Conference)
The Conference on Jewish Material Claims Against Germany (Claims Conference), a nonprofit organization with offices in New York, Israel and Germany, secures material compensation for Holocaust survivors around the world. Founded in 1951 by representatives of 23 major international Jewish organizations, the Claims Conference negotiates for and disburses funds to individuals and organizations and seeks the return of Jewish property stolen during the Holocaust. As a result of negotiations with the Claims Conference since 1952, the German government has paid more than $90 billion in indemnification to individuals for suffering and losses resulting from persecution by the Nazis. In 2022, the Claims Conference will distribute over $700 million in compensation to over 210,000 survivors in 83 countries and allocated over $720 million in grants to over 300 social service agencies worldwide that provide vital services for Holocaust survivors, such as home care, food and medicine.
Publish your organization's press release on JNS Wire
Releases published on the JNS Wire are communicated and paid for by third parties. Jewish News Syndicate, and any of its distribution partners, take zero responsibility for the accuracy of any content published in any press release. All the statements, opinions, figures in text or multimedia including photos or videos included in each release are presented solely by the sponsoring organization, and in no way reflect the views or recommendation of Jewish News Syndicate or any of its partners. If you believe any of the content in a release published on JNS Wire is offensive or abusive, please report a release.
Never miss a thing
Get the best stories faster with JNS breaking news updates