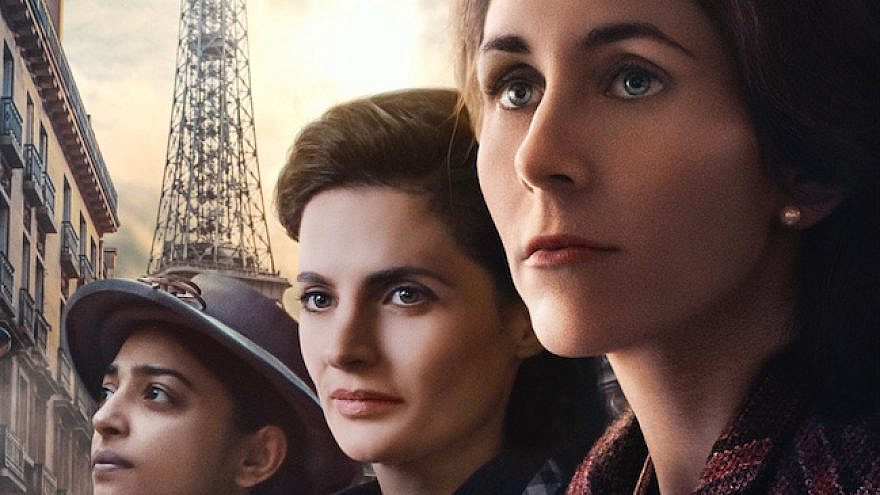 The program will take place online as a live Zoom webinar on Mon., March 1 at 7:00 p.m.

Synopsis of A Call to Spy: In the beginning of WWII, with Britain becoming desperate, Churchill orders his new spy agency – “SOE” – to recruit and train women as spies. Their daunting mission: conduct sabotage and build a resistance. SOE’s “Spymistress,” Vera Atkins (Stana Katic) recruits two unusual candidates: Virginia Hall (Sarah Megan Thomas), an ambitious American with a wooden leg, and Noor Inayat Khan (Radhika Apte), a Muslim pacifist. Together, these women help to undermine the Nazi regime in France, leaving an unmistakable legacy in their wake. Vera Atkins was Jewish and faced antisemitism in London while working for the SOE. Inspired by true stories, this original screenplay draws upon SOE and CIA (and its pre-cursor, OSS) files, as well as interviews with living relatives.

To register for the program, visit www.holocaustcenter.org/spy. Registrants will receive a link to the March 1 Zoom Webinar. The film can be watched on-demand on digital or cable platforms. Please visit www.acalltospy.com/where-to-watch for details.

“Virginia Hall and Noor Inayat Khan were great spies not because they were women, but because they were smart, tenacious and accomplished. A Call to Spy shows how the perseverance and individual choices people make can create a tremendous impact,” said Holocaust Memorial Center Director of Events Sarah Saltzman. “This timeless lesson resonates today as it relates to our mission to stand up for injustice and to be an upstander, not a bystander. We are honored to have such distinguished participants for this discussion.”

Sarah Megan Thomas is an actress, producer and writer. For her film, A Call to Spy, Thomas wrote the original screenplay, portrayed Virginia Hall, and produced the film. Thomas’ previous feature was the groundbreaking EQUITY, in which she created the concept, co-wrote the story, produced, and co-starred. EQUITY is the first female-driven Wall Street thriller.

According to Thomas, “Once I learned about the ‘lady spies’ in Churchill’s Secret Army, and realized that their stories are still ‘secret’ to most of the world, I knew A Call to Spy had to be made.”

Thomas was honored with a Women’s Image Network Award, The Creative Coalition Spotlight Award, and the Voice of a Woman Award. A graduate of Williams College, she trained at Drama Studio London.

Former CIA senior intelligence officer Craig Gralley wrote the historical novel Hall of Mirrors: Virginia Hall: America’s Greatest Spy of WWII. The novel was named “Best Book of 2020” by Kirkus Reviews and was names a “Best Book of the Week” by the New York Post. It also has received accolades from The Historical Novel Society; Independent Book Review (top story), and SPYSCAPE, among others. Gralley has published work in a wide variety of news and public affairs magazines.

Gralley was chief speechwriter for CIA directors William Webster, Robert Gates and James Woolsey; and served as an analyst and manager within CIA’s Analysis Directorate, the National Intelligence Council and the agency’s Office of the Inspector General. Gralley graduated with honors from Allegheny College in Meadville, PA, with a BA in International Affairs and Philosophy, and holds Masters’ degrees from Georgetown University (Government) and Johns Hopkins University (Writing).

Nancy Kaffer is an award-winning columnist and member of the editorial board at the Detroit Free Press where she writes about politics, policy and the complicated relationship between the two. Her columns have focused on such topics as Detroit’s historic municipal bankruptcy, K12 education in Detroit, and the Flint water crisis. Kaffer’s coverage of the Flint water crisis earned her the 2015 Scripps Howard Walker Stone Award for Opinion Writing and the Shorenstein Center’s 2016 Nyhan Prize.

Kaffer has contributed articles and columns to Politico, CNN Opinion and The Daily Beast, writing about state and national politics, policy and culture. Previously a staff writer for Crain’s Detroit Business, Kaffer wrote about small business, retail, city government and Michigan’s second-stage economy. She has also worked at publications including metro Detroit alt-weekly Metro Times and the Hattiesburg (Miss.) American.

Community partners for this event are the Detroit Jewish Film Festival and the Greater Farmington Film Festival.

To learn more about the women portrayed in A Call To Spy by purchasing relevant books from the Doris & Eric Billes Museum Shop at the Holocaust Memorial Center Zekelman Family Campus, please visit http://bit.ly/ACallToSpy_OrderBooks.

Republish this article
About The Publishers
Holocaust Memorial Center Zekelman Family Campus
The Holocaust Memorial Center Zekelman Family Campus is a 55,000 square foot museum and Library Archive in Farmington Hills that teaches about the senseless murder of millions and why each of us must respect and stand up for the rights of others if we are to prevent future genocide and hate crimes. The lessons of history are used to create a call to action, teaching visitors through the examples of those who risked their lives to save others, and asking our guests to react to contemporary challenges such as racism and prejudice. Exhibits include artifacts such as an authentic WWII-era boxcar, text panels, photos, video testimonies, films, paintings, sculpture, and a sapling from the tree located outside Anne Frank’s hiding place window that is described in her diary. Located on the second floor above the museum, the Library Archive is an important resource for academics, the media and families researching their heritage. Please call to speak to a librarian. Hours: Sunday through Thursday 10:00 am to 4:00 pm and Friday 10:00 am to 2:30 pm. For the first hour of each day, 10:00am -11:00 am, admission is reserved for seniors and those who are immune compromised. The last admission is one hour before closing. Face masks are required. Wheelchair accessible. Free parking. For additional information, visit www.holocaustcenter.org or call 248-553-2400.
Publish your organization's press release on JNS Wire
Releases published on the JNS Wire are communicated and paid for by third parties. Jewish News Syndicate, and any of its distribution partners, take zero responsibility for the accuracy of any content published in any press release. All the statements, opinions, figures in text or multimedia including photos or videos included in each release are presented solely by the sponsoring organization, and in no way reflect the views or recommendation of Jewish News Syndicate or any of its partners. If you believe any of the content in a release published on JNS Wire is offensive or abusive, please report a release.