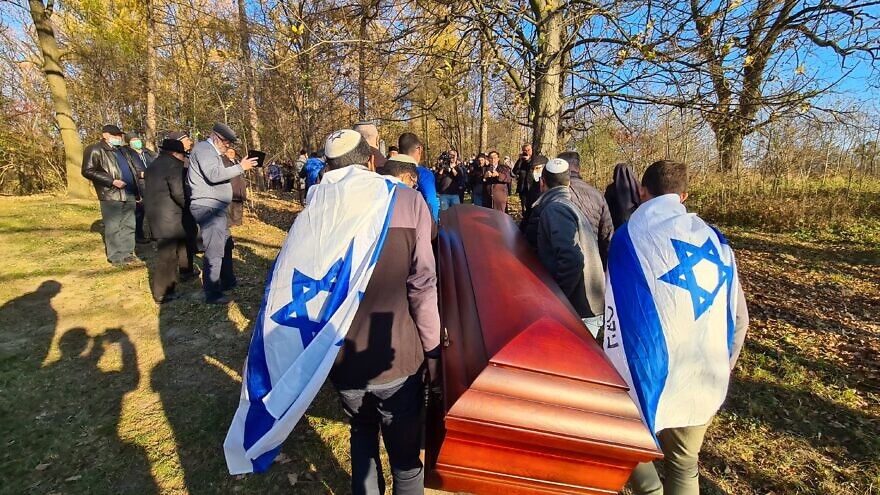 AMIT students carry the coffin of Jaffa's Catholic Priest, Gzregorz Pawlowski (Jacob Hirsch Griner) to its final resting place alongside the Izbica mass-grave that Griner's mother, sisters and 1,000 other Jewish victims were shot and killed in 1942 during the Holocaust. Credit: AMIT
Spread the word.
Help JNS grow!
Share now:

(January 10, 2022, IZBICA, Poland, JNS Wire) It was a chilly November day that Rabbi Shalom Malul, the dean of the AMIT Ashdod Yeshiva in Israel, a half-dozen AMIT students and a handful of other Jews helping to make a minyan, stood beside the grave of Jaffa’s Roman Catholic priest, Father Gregor Pawlowski, to recite mourner’s kaddish, the traditional prayer of the Jewish people following the death of a loved one or other member of their community.

In doing so, they were abiding by the priest’s lifelong wish to be buried in accordance with Jewish law, adjacent to the mass grave where his mother, sisters and 1,000 other Jewish victims were shot and killed in 1942 during the Holocaust. The funeral was also attended by several hundred Roman Catholics paying their final respects to their long-standing communal leader.

“We’re extremely proud of Rabbi Shalom Malul and his students from his AMIT yeshiva for personifying AMIT’s values of acceptance and inclusion through their tremendous Kiddush Hashem,” said AMIT President Audrey Axelrod Trachtman.

Father Gregor Pawlowski was born Jacob Hirsch Griner into an Orthodox Jewish family in Zamosc, Poland in 1931, where he spent his early childhood until the Nazi occupation and subsequent transfer of the Jewish population to Izbica’s ghetto in 1939. After Pawlowski’s narrow escape from the mass killing which claimed the lives of his mother and sisters, he was taken in by a Roman Catholic orphanage who helped to hide him and facilitated his name change ultimately securing his future. It was the church that he would devote his life to, going on to being ordained a priest and eventually immigrating to Israel where he worked with Roman Catholic communities for over 30 years.

Prior to leaving Poland, he erected a headstone alongside his mother and sister’s place of burial that read “I abandoned my family in order to save my life at the time of the Shoah, they came to take us for extermination, my life I saved and have consecrated it to the service of God and humanity.”

Upon Rabbi Malul’s encountering this stone years ago during an AMIT trip to Poland for students, he began to research the community and its author, leading him to the Roman Catholic priest in Jaffa and what would be years of friendship between the two men.

Malul remembers Father Pawlowski’s constant expressions of appreciation for the Roman Catholic church, and that never in his life would he have considered abandoning his religion to become a practicing Jew. Simultaneously, his desire to return to his Jewish roots specifically at the end of his life precipitated the fulfillment of Pawlowski’s longstanding aspiration to be buried in accordance with Jewish law next to his loved ones.

“Father Pawlowski would constantly remind me of his dying wish, saying that he was ‘born a Jew, lived a Catholic, and wished for a Jewish burial,” said Rabbi Malul. “Over the years, Father Pawlowski was a close friend, an invaluable asset in helping to teach our students about his community before and during the war, and the cost the war had even on those who managed to survive. In helping to uphold his wishes, Father Pawlowski was able to teach our students a remarkable lesson, both in Chessed Shel Emet and in Kiddush Hashem.”

“Regardless of the path Father Pawlowski’s life took, Rabbi Malul upholding his dying wish is emblematic of AMIT’s foundational educational value of V’Ahavta Lereiacha Kamocha, to love your fellow as yourself,” said AMIT President Audrey Axelrod Trachtman. “By using this incredible Mitzvah as a learning opportunity, the students of AMIT Ashdod were imparted with the value of every Jewish soul regardless of how they choose to live their life.”

AMIT Ashdod plans to continue commemorating Jacob Hirsch Griner through learning in his memory and continuing to tell the story of his family, his community and personal journey to future students.

Republish this article
About The Publishers
AMIT
Publish your organization's press release on JNS Wire
Releases published on the JNS Wire are communicated and paid for by third parties. Jewish News Syndicate, and any of its distribution partners, take zero responsibility for the accuracy of any content published in any press release. All the statements, opinions, figures in text or multimedia including photos or videos included in each release are presented solely by the sponsoring organization, and in no way reflect the views or recommendation of Jewish News Syndicate or any of its partners. If you believe any of the content in a release published on JNS Wire is offensive or abusive, please report a release.