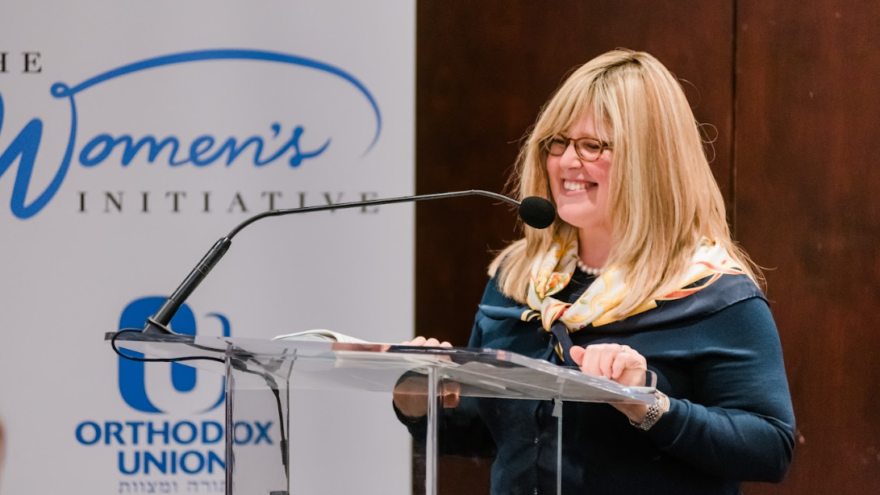 (August 16, 2022, JNS Wire) When Sarah F., a rebbetzin in a Midwestern Jewish community, was asked to meet with a woman in her community caught in the grip of severe depression, she was hesitant. The woman’s husband had confided in his rabbi, Sarah’s husband, that his wife’s mental health struggles were deeply impacting her ability to parent their small children: She had a short fuse and little patience, he said — when she managed to get out of bed.

“I was very hesitant I was up for the task of encouraging her to get professional help,” said Sarah. Then she saw the ad for the Orthodox Union Women’s Initiative Fellowship.

“Foundations of Community Mental Health Support” is the new fellowship geared toward rebbetzins (rabbis’ wives) like her: teachers of intricate Jewish law for married women (kallah); Jewish outreach professionals; and educators. These women leaders serve on the front lines of Jewish communities to help care for the spiritual, social, emotional and intellectual needs of a wide variety of individuals and families. Sarah applied right away.

Said Sarah, “During the course of the fellowship, I learned helpful ways to phrase advice so that people could be more receptive to it. I learned to say, ‘I know a number of people struggling with similar issues as you who have found therapy really helpful,’ and ‘what do you think?’” By phrasing things in this way to the wife who was struggling with depression, the woman felt empowered to seek therapy.

“I would not have worded my advice that way before I participated in the fellowship, and I wouldn’t have been effective,” she added.

Providing support for women to deal with difficult scenarios is part of the OU Women’s Initiative’s mission, ever since it was launched by the Orthodox Union in 2017.

“There is no greater investment we can make than in the women who act as the first responders to critical issues facing individuals and families in our communities,” noted Dr. Adina Shmidman, the Women’s Initiative director. “The OU sees it as our responsibility to help women fill their toolbox with the resources and relationships that will help them help others with confidence and sensitivity.”

The fellowship, the first of its kind, received nearly 100 applications for 30 slots and ran for seven weeks in May and June over Zoom. It culminated in a two-day, in-person inaugural conference, “Understanding Our Communities,” in Stamford, Conn. at the end of July. Experts presented on topics such as contemporary communal challenges, many of which are exacerbated in the wake of the pandemic and the current social and economic uncertainty.

Fellowship participants enjoyed an exclusive afternoon of programming before being joined by 90 other women from across North America and Israel.

Chana, a New Jersey-area rebbetzin and women’s learning facilitator who participated in the program said, “I was approached by a woman in my community dealing with some significant mental health challenges right before the conference, and I wasn’t prepared to deal with the dissociative episodes she described,” Chana explained. With her recent experience in mind, she said, “One lesson that spoke to me was that we are supporters, not saviors. Not only does that protect your own mental health, it gives the person you are helping autonomy to help themselves.”

She added, “I also appreciated being around other women who face the same issues I do. I think many of us started out very idealistic and unprepared for some of the situations we, by now, have all encountered. It helps feel like we’re not alone when we can come together at opportunities like this one to share our experiences.”

Another participant was Tamar M., a rebbetzin from a major city in the Southwest, who attended a session on supporting those facing cancer and terminal illness.

“A woman shared her personal experience that when she went into remission from cancer is when her family started falling apart and needed support the most,” said Tamar. “I learned that’s when the adrenaline wears off for many spouses and kids who were focused on being so strong during their loved one’s illness but then ran out of steam after. Going forward, I know I need to be as present in the aftermath of an illness impacting someone in my community as I am during it.”

Breakout sessions enabled participants to meet each other and, despite different ZIP codes and communal roles, find common ground and tap into each other’s strengths and experiences.

“Being able to connect with other rebbetzins across the country was invaluable,” said Dina Goldberg, the associate rebbetzin of Congregation Ahavath Torah in Englewood, N.J. “Rebbetzins marry into their roles, while our husbands frequently experience training in pastoral care and often mental health. Having access to training through the OU Women’s Initiative has given me more confidence to be present and supportive during times of need in my community.”

About the OU and the Women’s Initiative


Founded in 1898, the Orthodox Union, (OU), serves as the voice of American Orthodox Jewry, with over 400 congregations in its synagogue network. The OU Women’s Initiative aims to create and promote women’s programming in the areas of Torah study, community leadership, spiritual, personal and professional growth, health and social well-being for women of all ages.

Orthodox Union
The Orthodox Union is the umbrella organization for American Orthodox Jewry with more than 400 congregations in its synagogue network.
Publish your organization's press release on JNS Wire
Releases published on the JNS Wire are communicated and paid for by third parties. Jewish News Syndicate, and any of its distribution partners, take zero responsibility for the accuracy of any content published in any press release. All the statements, opinions, figures in text or multimedia including photos or videos included in each release are presented solely by the sponsoring organization, and in no way reflect the views or recommendation of Jewish News Syndicate or any of its partners. If you believe any of the content in a release published on JNS Wire is offensive or abusive, please report a release.
Never miss a thing
Get the best stories faster with JNS breaking news updates