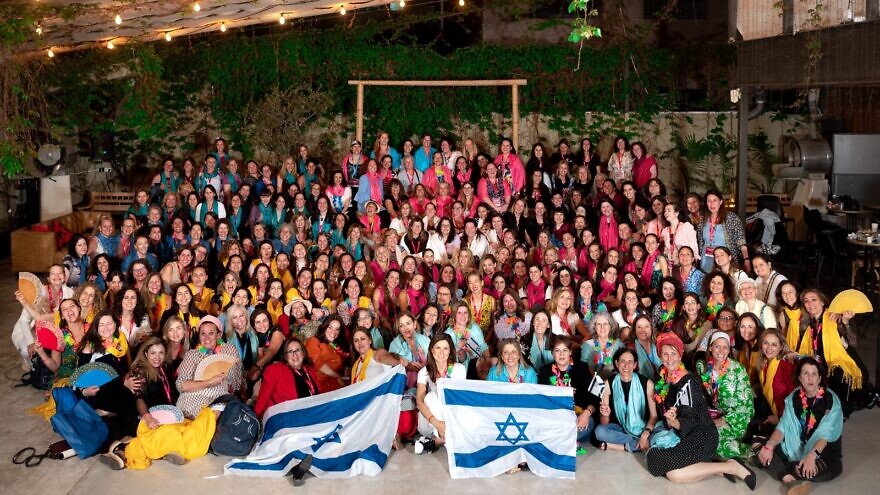 (May 17, 2022, Tel Aviv, JNS Wire) Momentum, a global movement that helps women deeply connect to their Jewish values and to the State of Israel, brought back its flagship Israel experience in full force by bringing 350 women to the country for an eight-day trip that took place over the last week.

In 2021, Momentum was already among the first organizations to bring trip participants from around the world into Israel. This year, Momentum’s signature trip returned to its pre-pandemic attendance level.

Founding Director Lori Palatnik said, “Momentum is thrilled with the explosion of travel and the desire for Jews in the Diaspora to come to Israel. When the pandemic put a stop to travel to Israel, it gave people an even greater desire to do so. The women who have landed represent the tens of thousands who can’t wait to get here and we are honored to be here with the Ministry of Diaspora Affairs to welcome them and give them an experience of a lifetime.”

“Momentum is prepared to meet this bursting demand for meaningful travel, and we are looking to significantly expand our numbers and offerings moving forward,” she added.

Trip participants for 2022 include women from across the United States, Canada, France, Spain, and South Africa. In fact, Momentum’s latest trip took place in three languages — English, Spanish, and French. The women experienced Israel within the framework of Momentum’s four central goals: connecting to Jewish values, engaging with Israel, taking action, and fostering unity without uniformity.

Since Momentum was founded in 2009, the movement has brought participants from 34 countries to Israel. This flagship Israel program is a joint partnership between Momentum and Israel’s Ministry of Diaspora Affairs. Momentum is also fully connected to the organizational ecosystem across the Jewish world, maintaining partnerships with approximately 300 Jewish organizations and federations.

The organization was established when Palatnik noticed that communities were struggling to connect women with Jewish values and Israel, and together with eight women from the DC area developed the concept of a subsidized trip to Israel for Jewish mothers as a transformative investment in the Jewish family.

“In many households, the mother sets the tone for how much a family will incorporate Jewish life and attachment to Israel into their homes,” Palatnik said. “In many ways, she is the figurehead and through her, we can begin to see generational change in terms of being more connected, inspired, and engaged with one’s heritage and connection to Israel.”

As such, Momentum aims to empower women to change the world through Jewish values and connections to Israel that transform ourselves, our families, and our communities.

Momentum participants’ jam-packed itinerary ran the gamut from must-see sites in Israel to lectures from influential figures in the country. Experiences included a visit to the Ethiopian Heritage Center, where they heard from other influential Israeli women like Torah educator Rachelle Fraenkel, the mother of one of the three boys who were kidnapped by Hamas in 2014; a tour of the mystical city of Tzfat; dancing at the Western Wall; floating in the Dead Sea; and hiking up Mount Masada.

On the trip, the participants also met with Ukrainian and Russian alumni of Momentum who recently fled the war and made Aliyah (immigration to Israel). There, they heard the harrowing stories of the women’s journeys and offered a supportive community.

The Momentum trip’s delegation from France — who joined the experience for the first time — heard a presentation from Israel Prize winner and mother of six Miriam Peretz, herself a French speaker from Morocco. Peretz became a motivational speaker after the deaths of two of her sons during their Israel Defense Forces service.

Throughout the participants’ journey, Israeli mothers served as what Momentum describes as a “living bridge” between the State of Israel and the Diaspora.

Cypress Kropko from Charlotessivlle, VA, who had never been to Israel before, said she was eager to connect to the land and other Jewish women on the trip, “I’m looking forward to building a stronger community of Jewish women. I decided to come on Momentum because it seemed like a great opportunity to get to know other Jewish moms. I had my first baby ten months ago and I want to bring him into a Jewish community and I thought this would help.”

Formerly the Jewish Women’s Renaissance Project, Momentum has seen tremendous success in its mission of inspiring women to not only discover but become enchanted with Israel. According to their annual report, within three months after their trip, approximately 91% agree that Momentum enabled them to bring more meaning to their Jewish practice; 83% report feeling extremely connected to Israel and 52% talk about Israel with their family on a weekly basis.

Republish this article
About The Publishers
Momentum
Publish your organization's press release on JNS Wire
Releases published on the JNS Wire are communicated and paid for by third parties. Jewish News Syndicate, and any of its distribution partners, take zero responsibility for the accuracy of any content published in any press release. All the statements, opinions, figures in text or multimedia including photos or videos included in each release are presented solely by the sponsoring organization, and in no way reflect the views or recommendation of Jewish News Syndicate or any of its partners. If you believe any of the content in a release published on JNS Wire is offensive or abusive, please report a release.
Never miss a thing
Get the best stories faster with JNS breaking news updates