(April 4, 2022, Washington, DC, JNS Wire) Perhaps no one knows the evils of the regime of the Islamic Republic of Iran better than the Iranian Diaspora. Many have witnessed loved ones and watched while tens of thousands of dissidents, human rights activists, members of religious minorities, and members of the LGBTQ community have faced “show trials. ” These usually last no more than a few moments and frequently result in torture and execution.

If this “nuclear deal” does go through, who are we empowering? Why are we ignoring the voices of thousands of courageous Iranian dissidents who despise the regime, and cementing the rule of this repressive, brutal theocracy seeking global hegemony?

Why are we trying to isolate one evil, Russia, while empowering another, the Islamic Republic of Iran? And what can we possibly do about it?

Here to answer these questions is Cameron Khansarina, Policy Director of the National Union for Democracy in Iran.

Register here for this VIRTUAL event.

About the speaker: Cameron Khansarinia is Policy Director of NUFDI, a Washington-based non-partisan, non-profit organization representing the Iranian-American community in pursuit of a U.S. policy toward Iran rooted in democracy and human rights. Prior to joining NUFDI he lived in New York City and worked at BlackRock. He studied government and political theory at Harvard where he served as the President of the Iranian Association and as the Vice President of the Student Body. After the completion of his thesis under the advisement of Professor Harvey C. Mansfield, he graduated in 2018. 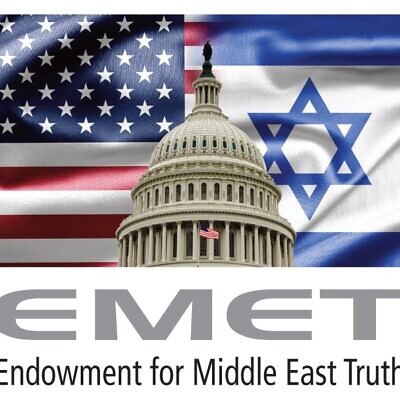 Endowment for Middle East Truth
Founded in 2005, The Endowment for Middle East Truth (EMET) is a Washington, D.C.-based think tank and policy center with an unabashedly pro-America and pro-Israel stance. EMET (which means truth in Hebrew) prides itself on challenging the falsehoods and misrepresentations that abound in U.S. Middle East policy. As a tax-exempt 501(C) 3 Non-Profit organization we work to educate policy-makers by providing pertinent information to senators and representatives to make informed decisions that will improve American security and the security of America’s ally, Israel. EMET earned its reputation as the “go-to-people” on Capitol Hill for Senators and Members of Congress who understand the importance of a strong and secure America, and a strong American-Israeli alliance against the forces of radical Islam and terror.
Publish your organization's press release on JNS Wire
Releases published on the JNS Wire are communicated and paid for by third parties. Jewish News Syndicate, and any of its distribution partners, take zero responsibility for the accuracy of any content published in any press release. All the statements, opinions, figures in text or multimedia including photos or videos included in each release are presented solely by the sponsoring organization, and in no way reflect the views or recommendation of Jewish News Syndicate or any of its partners. If you believe any of the content in a release published on JNS Wire is offensive or abusive, please report a release.
Never miss a thing
Get the best stories faster with JNS breaking news updates