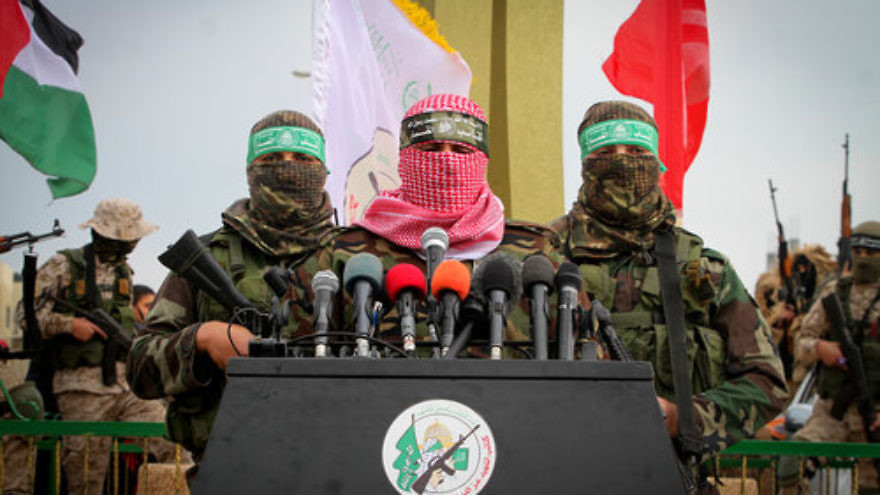 (February 16, 2017 / JNS) Islamic State-affiliated armed organizations are challenging the Hamas terror group’s rule in the Gaza Strip and are seeking to topple the Islamist regime, which they accuse of being un-Islamic and lacking in jihadist spirit.

A rocket attack by a small Islamic State-affiliated group in Gaza earlier this month, and subsequent multiple Israeli airstrikes on Hamas targets, illustrate the fragility of the truce, in place since a two-month conflict between Hamas and Israel ended in August 2014.

Although Hamas was not behind the recent rocket attack, the Israeli Air Force targeted a number of the terror group’s assets in the airstrikes, and the Israel Defense Forces (IDF) hinted that the airstrikes came in response to dangerous Hamas activities that had taken place in recent weeks.

This explosive and complex situation reflects the fact that Hamas prefers to exploit the current absence of a full-scale conflict with Israel to build up its military wing, fill up its rocket depots and dig tunnels for future cross-border attacks. Yet at same time, the Islamic State-affiliated smaller groups, known as Salafi jihadists, insist on armed conflict with Israel right now.

Prof. Boaz Ganor, founder and executive director of the International Institute for Counter-Terrorism in the central Israeli city of Herzliya, told JNS.org that Hamas’s challenges in dealing with the Salafi jihadists are similar to the issues Fatah and the Palestinian Authority had—and continue to have—with Hamas itself.

“One of the central mistakes made by Yasser Arafat in the 1990s after he returned to the [Gaza] Strip and to the West Bank in the context of the Oslo Accords was that, when Fatah could have, they chose not to harm Hamas’s infrastructure. They never fought Hamas, and actually chose to safeguard the organization’s capabilities,” Ganor said.

“It was convenient for Arafat to paint Fatah as the moderate side, working for an arrangement [with Israel], while the alternatives are the radical Hamas members. He tried to ride on the Hamas tiger. But in 2007, the tiger devoured Fatah in Gaza, and in the future, perhaps it will do the same in the West Bank,” he said. “Now, Hamas is making exactly the same mistake.”

If Hamas were to choose to crush the Salafi jihadists in Gaza and end their presence, it could so “without difficulties,” Ganor argued. “But they don’t want to do this. It is comfortable for them to have a more extreme element than them in the Palestinian arena. This portrays Hamas as a rational and stabilizing force in the arena,” he said.

The strategy appears to be working, according to Ganor, at least on the surface. Israel refrained from destroying Hamas during the two-month Gaza conflict in the summer of 2014, out of a deep concern that such a result would create a vacuum filled by the Salafi jihadists.

Now, amid Hamas’s new approach, Ganor said the Gaza-ruling group’s fate “will be the same as Fatah. If they do not deal with the Salafis now, the tiger could easily devour them in the future.”

The Islamic State-affiliated armed groups in Gaza pose a present and future threat to Hamas’s rule, since they can create a sudden security escalation that will drag Hamas into a large-scale conflict with Israel, even if neither Hamas nor Israel desire one when the Salafis strike.

The situation has gotten even more complex with the resent ascension to power in Gaza of Yayha Sinwar, a hard-liner even by Hamas’s brutal standards.

The “Sinai Province” Islamic State franchise is sympathetic to the conflict waged by its Islamic State-affiliated brethren in Gaza against Hamas, yet it also enjoys weapons deals with Hamas, and profits by selling access to its tunnels linking Sinai to Gaza for the purpose of smuggling arms.

Sinwar promoted these ties and ignored objections from Hamas’s political wing. That, however, is no guarantee that Sinwar will continue to promote ties with Islamic State in the Sinai, according to Shlomo Brom, who heads the Israeli-Palestinian Relations Program at the Tel Aviv-based Institute for National Security Studies.

Brom told JNS.org that despite the many reports claiming to forecast Sinwar’s conduct, “I have no idea how he will behave. All that has been written on this subject so far is based on the incorrect assumption that if someone behaved in a certain way in an organization until now, that person will behave in the same way in the future.”

Brom said that once he takes up leadership of the political bureau in Gaza, Sinwar will have a different view than he did in the military wing.

“I can’t get into his mind and know how he will act,” he said.

Hamas has needed Islamic State in the Sinai to smuggle weapons through tunnels that survived the Egyptian army’s program to destroy them, but it also has other considerations, Brom said.

Brom, who served as the head of the IDF’s Strategic Planning Division in the General Staff Planning Branch, believes the main goal of the Salafi jihadists at this time is to delegitimize Hamas’s regime.

“I don’t think the Salafi jihadists can pose a significant challenge to the Hamas regime at this stage. But they are a problem for Hamas. They outflank them on the jihadist map, as seen through rocket attacks, and statements. They aim to tell the Palestinian public that there is no difference between Hamas and Fatah. Just like Fatah is seen as an ineffective collaborator of Israel, Hamas is portrayed by the Salafis as the same,” Brom said.

Salafi rocket attacks could entangle Hamas in a major problem with Israel in the future, Brom warned, which is why these groups launch them. They seek to use the Israeli Air Force to expose Hamas to Israeli retaliation, he added.

Hamas, seeking to avoid an escalation at this time, does not respond to Israel’s retaliatory strikes, and this further reinforces the Salafi message that Hamas has turned into “Fatah two,” Brom added. “They are not seen as sufficiently Islamic,” he said.

Yet Hamas may be able to counteract this challenge by improving relations with Egypt, which has been the goal of a series of recent high-level meetings in Cairo.

Hamas sent both military wing and political wing delegations to Egypt in recent weeks, as part of a bid to improve ties with the powerful regime of President Abdel Fattah El-Sisi. Relations with Egypt have, until now, been openly hostile, with Cairo identifying Hamas as a core partner of its domestic Islamist enemies and an active supporter of the Islamic State insurgency in the Sinai.

Hamas could try to play a double game, Brom said, by improving ties with Egypt and maintaining links with Sinai Province, though this approach could blow up in Hamas’s face, he warned.

Throughout all of this, Hamas will continue to face its own domestic jihadist challengers, who could—at any time—throw a wild card into the situation and set a wider security escalation into motion.