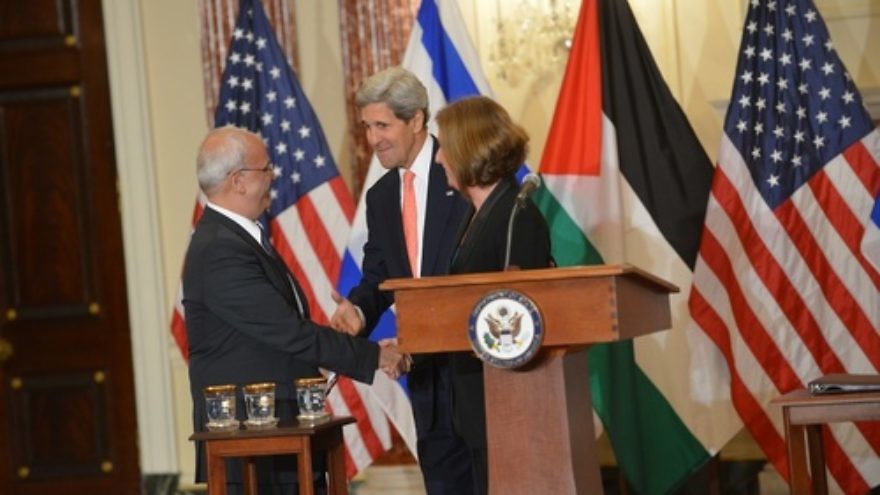 (April 10, 2014 / JNS) After spending more than two and a half hours testifying in front of the Senate Foreign Relations Committee, Secretary of State John Kerry is fending off criticism from all sides as Democrats, Republicans, and members of the media accuse him of unduly blaming Israelis for derailing peace negotiations.

During an April 8 hearing held as a review of the State Department’s $46.2 billion budget request for the upcoming fiscal year, most of the conversation dealt with the foreign policy implications of Russian actions in and around eastern Ukraine. U.S. Sen. Ben Cardin (D-MD) was the first to raise the topic of the breakdown of the Israeli-Palestinian peace talks.

“Can you just bring us up to date as to the prognosis of where we are in regards to the peace discussions?” Cardin asked the top U.S. diplomat.

Kerry offered a timeline of the events that he said led to the talks’ derailment the week before. Israel had delayed the fourth round of an agreed-upon release of Palestinian prisoners, he pointed out, and Palestinian President Mahmoud Abbas signed 15 international agreements in contravention of a pledge to not seek greater international recognition of a Palestinian state prior to April 29.

“The people of Israel have been incredibly supportive and patient in giving [Prime Minister Benjamin Netanyahu] the space to be able to [reach an agreement] in exchange for the deal being kept of the release of prisoners and [the Palestinians] not going to the U.N.,” Kerry said.

“Unfortunately, the prisoners weren’t released on the Saturday they were supposed to be released… and so a day went by, day two went by, day three went by, and then in the afternoon, when they were about to maybe get there, 700 settlement units were announced in Jerusalem, and poof, that was sort of the moment,” he said.

Judging by statements made after the testimony by a State Department spokesman, Kerry intended to place responsibility for the breakdown on both sides’ being “unhelpful” in moving the negotiations forward. Observers on Capitol Hill, however, read in Kerry’s remarks a greater emphasis on Israeli misdeeds.

“He put that postscript in, which I thought was unfortunate because I don’t believe that’s at all the reason,” Cardin told JNS.org. “The question is whether the Palestinians are sincere about moving forward with a peace agreement and we’ve seen this before—every time we get close, there doesn’t seem to be the courage among the Palestinian leaders.”

Later, Kerry sought to chart a way forward in the negotiations.

“Our teams are still having some discussion on the ground,” he said. “There was a long meeting yesterday between Palestinians and Israelis, and I’m not going to suggest anything is imminent, but one always has to remain hopeful in this very difficult, complicated process.”

Soon after Kerry’s testimony, a sea of denunciations followed on editorial pages and blogs.

Neri Zilber, visiting scholar at the Washington Institute for Near East Policy, took note of the remarks, but faulted the media for creating an issue out of what he thinks to be Kerry trying to appear objective.

“If you go back and listen to the hearings, my own interpretation of what Kerry said was that he was laying out a timeline and I think that’s actually right,” Zilber told JNS.org. “It’s an interesting development, what happened in the hearing, but I don’t think it should be blown out of proportion like certain other—especially Israeli—papers are portraying it.”

Cardin acknowledged that the overall message Kerry tried to present about his department’s efforts was optimistic. But his colleagues on the committee were less conciliatory.

U.S. Sen. John McCain (R-AZ) went so far as to suggest that the former senator’s efforts—Kerry had at one point chaired the Foreign Relations Committee before being tapped by President Obama to lead the State Department—were a dismal failure.

“The Israeli-Palestinian talks, even though you may drag them out for a while, are finished,” said McCain at Kerry’s testimony.

“Well, senator, let me begin with the place that you began with your premature judgment about the failure of everything,” Kerry replied. “I guess it’s pretty easy to lob those judgments around, but particularly well before the verdict is in on any of them.”

“It is stopped,” McCain fired back. “Recognize reality.”

State Department spokesperson Jen Psaki attempted on April 9 to clear the controversy surrounding Kerry’s “poof” comment, saying that the secretary was surprised at the attention it is getting.

“The truth is … if you look at the full context of his comments, he went out of his way to credit Prime Minister Netanyahu for making tough choices,” said Psaki. “And you’ll remember … that he began his comments by very matter-of-factly referring to the unhelpful and provocative steps the Palestinians took by going on television and, of course, announcing their intention to join [international] treaties.”

Following the hearing, the committee met privately with Israeli Foreign Minister Avigdor Lieberman in a closed door meeting, which Cardin described as a “meeting among friends.” Lieberman has been in the U.S. for the Jerusalem Post Conference in New York City and was invited to Washington for meetings with the committee, Obama, and Kerry.

Despite the apparent hopelessness surrounding the talks, Cardin was clear that he still believes U.S. involvement is necessary and feels that the secretary indicated that more progress was being made than has been publicly acknowledged.

“I think we have to keep trying,” said Cardin, “and I hope that the international community would—particularly as it relates to the Palestinians—explain to Mr. Abbas that moving forward with a peace agreement recognizing the Jewish state of Israel would be in the best interest of the Palestinians.”