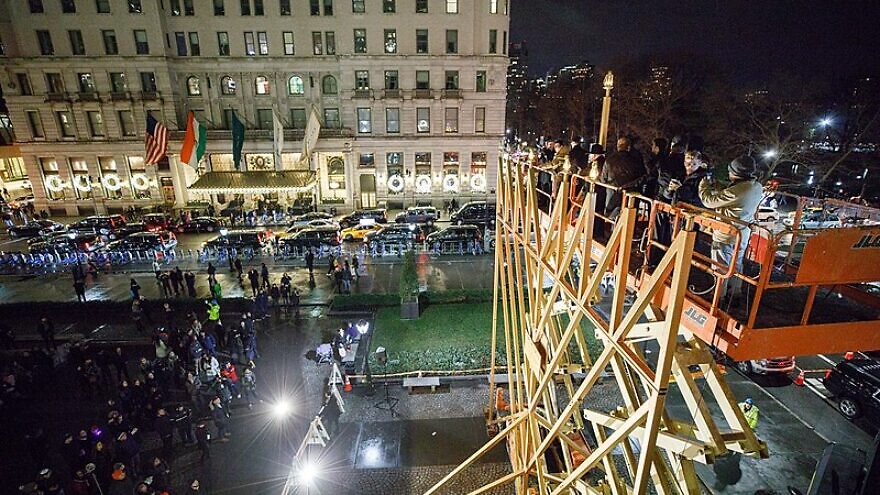 The 36-foot menorah in Grand Army Plaza, at the intersection of Fifth Avenue and Central Park South (59th Street)—which was sponsored by the Lubavitch Youth Organization—has become an annual fixture in New York City, with large crowds participating in its lighting on each of the eight nights of the holiday.

“Hanukkah is a holiday that celebrates the Jewish people’s remarkable deliverance from those who wished them harm,” said Rabbi Shmuel M. Butman, director of Lubavitch Youth Organization. “When faced with darkness, this menorah serves as a symbol of New York City’s dedication to persevering and celebrating all its citizens as they are. And this year, we’re shining that great symbol ever so bright.”

On the first night of Hanukkah, Adams called for an end to hatred and violence. “When we light the menorah tonight, let’s also light something inside ourselves,” the mayor said. “Let’s look at each other as brothers and sisters.”

Erdan quoted the late Chabad Rebbe Rabbi Menachem Schneerson, emphasizing the significance of the menorah lighting as a response to antisemitism. “The Rebbe taught us that even a little bit of light can dispel much darkness,” Erdan said.

On the eighth and final night of the festival, there was an “All Lights Night” celebration with Israel’s consul general.

The celebrations carried added significance this year as Jewish communities worldwide mark the year of Hakhel, a once-every-seven-years tradition that sees Jewish gatherings focused on unity and Torah study and practice.