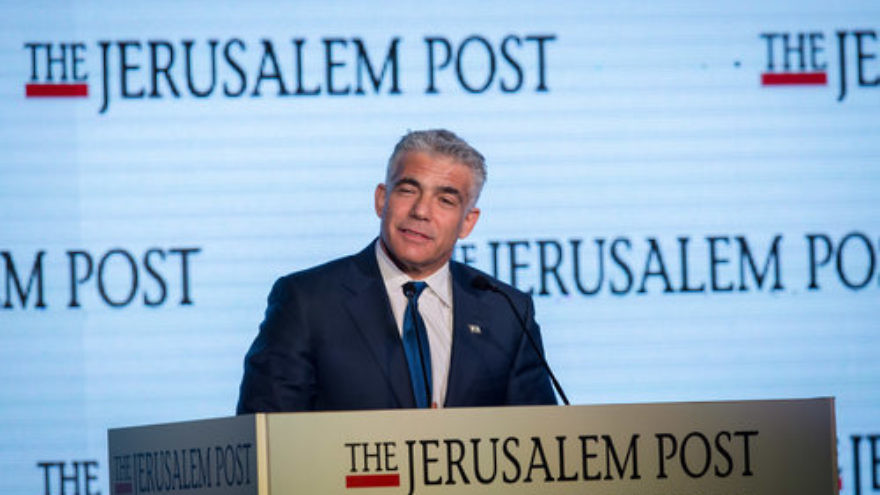 When Israeli media personality Yair Lapid established the Yesh Atid (There is a Future) party back in 2012, the U.S. State Department and Jewish peace activists were ecstatic, figuring Lapid would draw votes away from Prime Minister Benjamin Netanyahu’s Likud party. They were delighted with Lapid again earlier this year, when he refused to join Netanyahu’s governing coalition, briefly giving the Israeli left hope of preventing a Likud-led government.

Let’s see what they think of Lapid now that, as a leader of one of Israel’s opposition parties, he has publicly acknowledged that there is no “occupation” of the Palestinians and that the Palestinian Authority (PA) is the obstacle to peace.

Speaking at a diplomatic conference hosted this week by the Jerusalem Post newspaper, Lapid “pointed out that the PA has existed for over 20 years and Israelis do not have a presence in Palestinian cities except when there are security needs,” according to the Jerusalem Post.

Lapid was referring to way back in 1995, Israeli Prime Minister Yitzhak Rabin withdrew Israel’s troops from the cities where 98 percent of the Palestinian Arabs reside. The only circumstances under which Israeli soldiers go into these cities is “when there are security needs,” as Lapid put it—meaning, when they are chasing terrorists whom the PA refuses to arrest. The Israelis go in, catch the killers and then withdraw a few hours later.

An hours-long search-and-arrest mission is not even remotely close to constituting an “occupation.” Yet if you read the pronouncements of organizations like Peace Now and J Street, you will find constant assertions that Israel is “occupying” the Palestinians. The truth, as Yair Lapid has reminded us, is that the “occupation” ended 21 years ago.

Lapid described how anti-Israel demonstrators chanted “Free Palestine!” outside events in Europe in which he recently participated. “What is their version of freedom?” he asked. “What price are they willing to pay for it? What responsibilities are they willing to take upon themselves?”

Lapid in effect answered his own questions when he noted that even though the PA has been governing since 1995 without Israeli interference, it has “built a corrupt governing system without an effective judiciary or modern industry…The world wants to free Palestine. We have the right to ask what is it that they want to free in our backyard?”

The PA has no interest in a free and effective judiciary, elections or civil rights. It has evolved into exactly what the skeptics feared: a corrupt, brutal dictatorship. And dictatorships rarely make peaceful or stable neighbors.

Lapid then alluded to another uncomfortable fact: the Palestinians’ preference for victimhood and phony claims of homelessness, instead of building a functioning society. Alluding to Palestinians who claim to carry keys to their ancestors’ homes in pre-1967 Israel, Lapid said, “Grow up already. Israel has over 6 million Jews who could travel the world with a key. Keys to homes in Iraq, in Morocco, in Iran and Algeria. Keys in Poland, in Germany, in Hungary. We don’t do that because self-pity is not an efficient policy.”

The most painful part of Lapid’s truth-telling—painful, that is, for those who prefer to hide from the truth—was his description of how the PA fosters hatred and terrorism instead of peace. “The Palestinian education system poisons the minds of 6- and 7-year-olds every single day with anti-Semitic propaganda of the worst kind,” he said. “That’s not freedom. When they tell their children that Jews are monkeys and pigs, they are not marching towards the liberation of Palestine, they are putting new chains on their own ankles.”

Lapid “also detailed the way Palestinian terrorists and their families receive a salary from the PA, which uses the donations they receive from other countries,” the Jerusalem Post reported. “Instead of building something, instead of creating something, they choose a culture of murder and destruction,” Lapid said.

Thank you, Yair Lapid, for telling the truth about the Palestinians. Now let’s see if any of your former cheerleaders from the left are willing to join you in acknowledging reality.