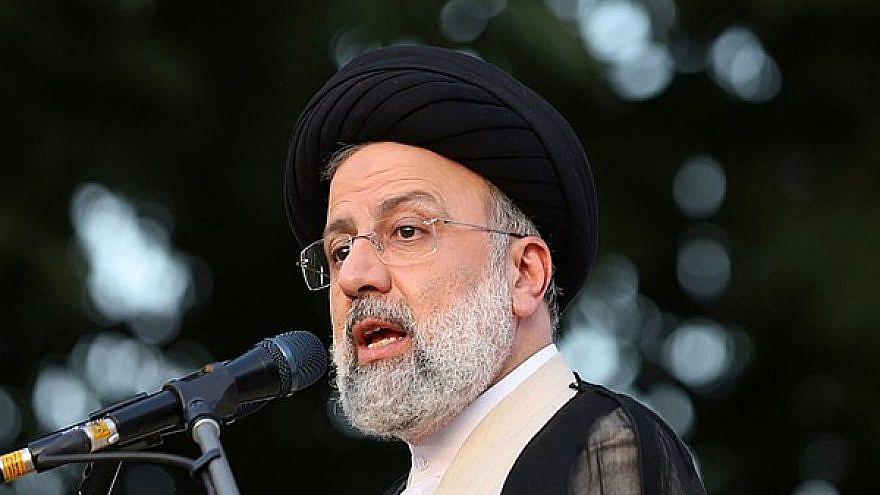 (June 21, 2021 / JNS) “The U.S. is obliged to lift all oppressive sanctions against Iran,” Iran’s president-elect Ebrahim Raisi said on Monday, taking a hardline position regarding ongoing nuclear talks in Vienna.

Speaking at a news conference shortly after his landslide victory in Iran’s June 18 presidential election, Raisi also said that he wouldn’t meet with U.S. President Joe Biden and that neither Iran’s ballistic-missile program nor its support for regional militias was up for negotiation, AP reported.

The White House, which has called for building “a longer and stronger agreement” than the Joint Comprehensive Plan of Action (JCPOA), the nuclear deal negotiated between Iran and world powers in 2015, did not immediately respond to Raisi’s comments, according to AP.

American allies in the region, including Israel, Saudi Arabia and the United Arab Emirates, have urged the Biden administration to include as part of a return to a nuclear deal the reining in of Iran’s missile program and its militias.

“Lacking a modern air force, Iran has embraced ballistic missiles,” said a 2019 U.S. Defense Intelligence Agency (DIA). It described Iran’s missile arsenal as the largest and most diverse in the Middle East. Among its arsenal are missiles capable of carrying a nuclear payload.

Iran also relies on militias, including in Iraq, Yemen and Lebanon, to extend its reach in the region. Iran-backed militias have targeted U.S. forces in Iraq and America’s allies in the region, including Israel and Saudi Arabia.

On Sunday, diplomats expressed optimism that a deal to restart the 2015 nuclear accord would be reached as the sixth round of negotiations drew to a close.

Raisi, who has served as the head of Iran’s judiciary since 2019, also fielded a question about his role during the 1988 mass execution of 5,000 people, saying that he was a “defender of human rights.”

“In Iran, a new president was elected this weekend—Ebrahim Raisi. For those who have doubts, it is not the public who chose; it is Khamenei that allowed them to choose. They chose the ‘hangman from Tehran.’ The choice of Raisi is the last signal for the world powers to wake up, to see who they are doing business with, just before returning to the nuclear deal. A regime of executioners must not possess weapons of mass destruction.”

According to AP, the U.S. State Department said it hoped to push forward with the talks “regardless of who is in power.”