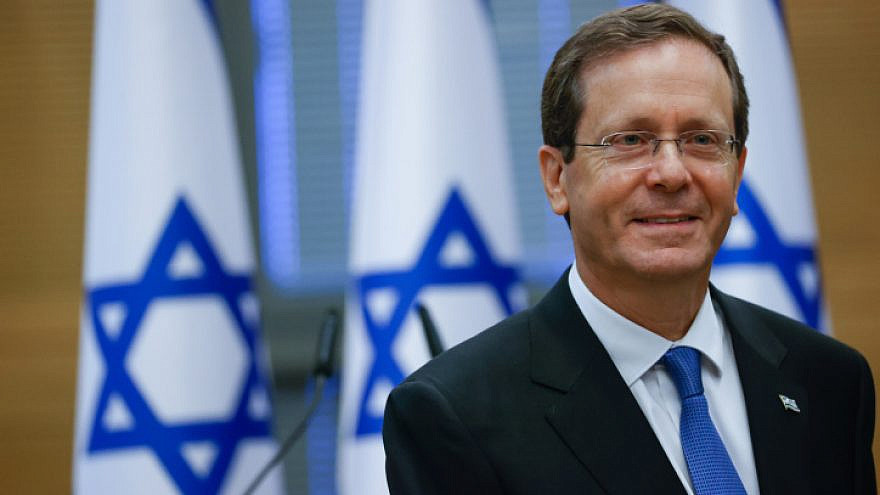 Israeli President-elect Isaac Herzog at the Knesset in Jerusalem on the day of the election, June 2, 2021. Photo by Yonatan Sindel/Flash90.
Spread the word.
Help JNS grow!
Share now:

(June 2, 2021 / Israel Hayom and JNS staff) The Knesset elected Jewish Agency for Israel chairman Isaac Herzog as Israel’s 11th president on Wednesday. The vote was conducted in a special session during which Knesset members cast secret ballots for either Herzog or Israel Prize laureate Miriam Peretz.

The previous day, each candidate had arrived at the Israeli parliament with teams of up to 50 relatives, friends and professionals, who lobbied members to vote for them.

Ahead of the vote, Knesset Speaker Yariv Levin reviewed the secret-ballot procedure, while Herzog and Peretz watched the proceedings from a special area of the plenum.

Knesset Secretary Yardena Meller-Horowitz invited each Knesset member, alphabetically by last name, to cast his or her vote behind a curtain. All had the option of casting a white ballot, meaning a vote for neither candidate.

Once the voting was over, Levin announced a recess for the votes to be tallied. The ballot box was taken into a separate room where members of the Knesset Ballot Committee—Knesset member David Bitan (Likud), Yosef Taieb (Shas), Emilie Moatti (Labor) and Yoel Razvozov (Yesh Atid)—performed the count.

The president-elect is not sworn in on the day of the voting. Incumbent President Reuven Rivlin will remain in office until July 9. His successor will be sworn in closer to that date.

“I want to congratulate Isaac Herzog upon being elected to the esteemed position of president of the State of Israel. I told him that he was continuing in the glorious tradition of his father, the late President Chaim Herzog,” said Netanyahu in a statement.

Chaim Herzog, who served as Israel’s sixth president from 1983 to 1993, “represented Israel in a way that inspired respect, even admiration, around the world and within the country,” said Netanyahu.

“I am certain, Bougie [Herzog’s nickname], that you will continue precisely in this manner. On behalf of myself, the Government of Israel and—I am certain—all citizens of Israel, I would like to wish you success,” he added.

The Israeli premier also congratulated both Herzog and Peretz for conducting an “honorable race.”

“There were two worthy candidates here, and I think that we can all welcome the choice, and we are all certain that there will be something important and good for the State of Israel here in the Herzog family tradition. Many congratulations.”

JNS contributed to this report.