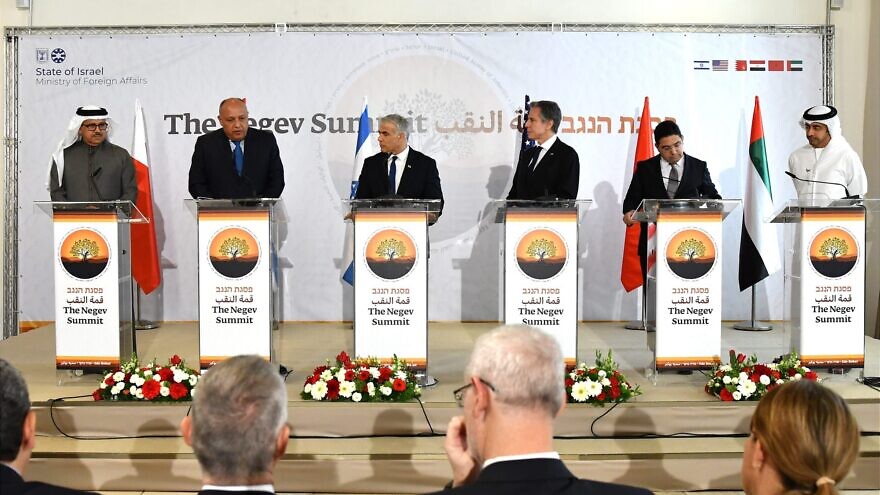 (March 28, 2022 / JNS) The Negev Summit hosted by Israel featuring the arrival of five foreign ministers—from the United States and Egypt, the United Arab Emirates, Morocco and Bahrain—will cause Iran to “shift uncomfortably” as it witnesses Arab-Israeli coalition-building, a former senior Israeli military commander has said.

Maj. Gen. (res.) Eitan Dangot, Israel’s former Coordinator of Government Activities in the Territories (COGAT) and a senior research associate at the MirYam Institute, said the meeting is a “direct continuation” of regional dynamics sparked by a rise of Iranian threats to regional security, as well as the potential fallout from the Vienna talks on Iran’s nuclear program that appear to be edging towards a revival of the 2015 nuclear deal.

The summit’s main focus is on Iran, he said, particularly on the day after a new nuclear agreement might be signed. Iranian freedom of operations, sanctions relief and growing self-confidence will represent heightened threats to regional security, assessed Dangot.

“Some of the dialogue will also be held in the context of new Iranian threats that have been seen in the region and threatening the security of civilians of various states—swarms of UAVs that Iran placed in its combat doctrine and the sending of UAV supplies to proxy organizations, which are already gaining experience in using them, like the Houthis in Yemen, and their attacks on Saudi Arabia and the UAE,” he said.

Iran is working to ensure that its chief proxy, Hezbollah, is equipped with the same capabilities, alongside ballistic and cruise missiles, creating new security challenges.

Egypt and Iran have seen tensions between them in the past, noted Dangot. While “some of the foreign ministers” taking part in the summit met their Iranian counterparts and Syrian President Basher Assad [an ally of Tehran] not long ago,” the summit “makes clear that ties between Israel and these countries are growing stronger,” he said.

“The Vienna talks obligate everyone to be prepared for the day after a nuclear agreement and to ensure they don’t lose a day of inaction,” said Dangot, in reference to the Arab Sunni states directly threatened by Shi’ite Iran’s quest for hegemony and regional proxy activity.

“This is a bad agreement for Israeli security and for regional states. Sanctions relief looks likely and perhaps the lifting of sanctions on [Islamic Revolutionary Guard Corps] IRGC. This emphasizes a breaking apart of restraining forces that were, in the past, placed on Iran,” said Dangot.

The presence of U.S. Secretary of State Anthony Blinken at the Israeli summit is highly significant since Washington is the “usher” of the Vienna talks, and the summit allows the regional Middle Eastern bloc of moderate states to share their positions on the emerging nuclear talks, he argued.

Blinken will be able to hear how regional states describe the significance of the agreement during the meeting in Israel’s south. At the same time, the summit underlines the “strength of the bloc created here, and the historic significance of Sunni-Muslim states and Israel cooperating,” said Dangot.

“This is an indicator of the central change occurring. Alongside the dangers, we see the rise of opportunities,” he stated.

‘A bigger dimension of Muslim-Sunni presence’

Dangot traced the summit’s origins to the 2020 Abraham Accords, describing the pact between Israel, the UAE and Bahrain as a basis that has gained momentum for the developing ties between regional states. “This also greatly contributes to each country’s economic development, their respective security and to regional security,” said.

While Saudi Arabia appears to be absent from the summit, it is, in actuality, “very present,” and has been in all meetings until now, suggested Dangot. “This brings closer the opportunity for Saudi Arabia establishing, at some point, relations with Israel,” he told JNS.

Meanwhile, Egypt—the first Arab state to sign a peace treaty with Israel in 1979—is working with the Jewish state on common interests that are both “close and further away,” he said, adding that “the presence of Morocco at the summit broadens the array of states taking part, creating a bigger dimension of Muslim-Sunni presence.”

Turkey, meanwhile, which recently took steps to thaw its relations with Israel and Sunni Arab states after years of deep tensions, is eying the prospect of becoming one of three big Muslim countries that are part of the anti-Iran-Shi’ite axis, said Dangot, the other two being Egypt and Saudi Arabia.

Meanwhile, the summit could go some way in decreasing the disconnect that has recently defined relations between the United States and its Gulf allies—Saudi Arabia and UAE—as seen in the recent lukewarm response by them to America’s request to increase oil exports following sanctions placed by the West on Russia.

“The Houthis have conducted intensive attacks on the same sites from which the Saudis are being asked to increase oil exports,” noted Dangot.

The summit also represents an opportunity for moderate regional states to influence future American strategic policies in the Middle East, as well as America’s own presence, in order to promote more U.S. involvement, deterrence and integration between Washington and its Mideast allies.

Jordan’s absence from the Negev Summit and from the preceding Sharm El-Sheikh conference, accompanied by the scheduled arrival of King Abdullah in Ramallah last week, indicates that the country “is choosing to be the regional bloc’s bridging representative to the Palestinians,” said Dangot.

“The background to this is the delicate demographic situation of Jordan and the difficulties it faces on a day-to-day basis with a large percentage of its population that is Palestinian,” he said.

While Jordan initially condemned the Abraham Accords, in actuality, “it is part of the bloc of countries that maintains deep bilateral ties with Israel. The gas- and water-supply agreements it signed with Israel for decades ahead are an example of this. This creates an affiliation and bilateral ties between Israel and Jordan that are difficult to unravel,” argued Dangot.

The summit further holds significance for the Palestinian arena, he said.

“The proximity to the Ramadan holiday creates a symbolism for holding such a conference in Israel, particularly in the Negev,” stated Dangot. “There is a message here to the Palestinian Authority about cooperation with Israel, and a warning signal to Hamas and its strategy [of confrontation] with Israel. If Hamas provokes new conflict with Israel in the near future, it will be isolated.”