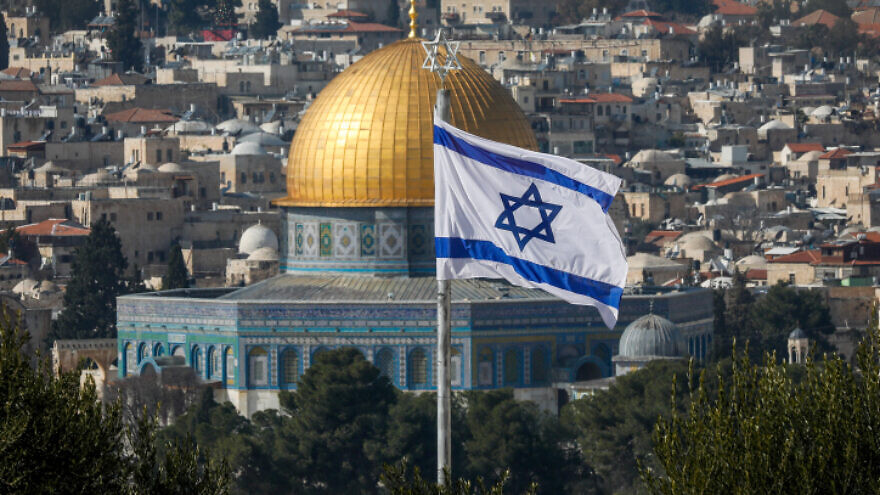 View of the Dome of the Rock and the Temple Mount in Jerusalem's Old City from the Mount of Olives observatory, Jan. 28, 2020. Photo by Olivier Fitoussi/Flash90.
Spread the word.
Help JNS grow!
Share now:

Police arrested two Jewish activists on Tuesday for waving Israeli flags and singing the Israeli national anthem atop the Temple Mount in Jerusalem.

Those detained were members of “Israel is Forever,” an organization of Jews of French origin.

“We’ve been detained already for five hours on the grounds of singing ‘Hatikvah’ and waving the Israeli flag. I just got my phone back but am still waiting to have my fingerprints and picture taken,” said Nili Naouri, one of the two arrested.

“It needs to be made very clear: We are allowed to wave the flag and sing the Israeli national anthem on the Temple Mount, and we will continue acting like the homeowners on the holiest place to the Jewish people!” he added.

Tom Nisani, CEO of Temple Mount advocacy group Beyadenu, said that despite the establishment of the new right/religious Israeli government, Jews were still being arrested on the Temple Mount for no reason.

“Nothing can justify arresting Jews singing Hatikvah and waving the Israeli flag,” he said.

Currently, Jews can only visit the site during short windows of time, and are prohibited from worshipping.

“We are also witnessing arrests, bans and detentions of hundreds of Jewish visitors to the Mount, not because they acted violently or illegally but for absurd reasons like praying, waving the Israeli flag, or trying to eat sufganiyot [jelly donuts—a treat associated with Hanukkah] on the Mount. This must change in 2023,” he said.