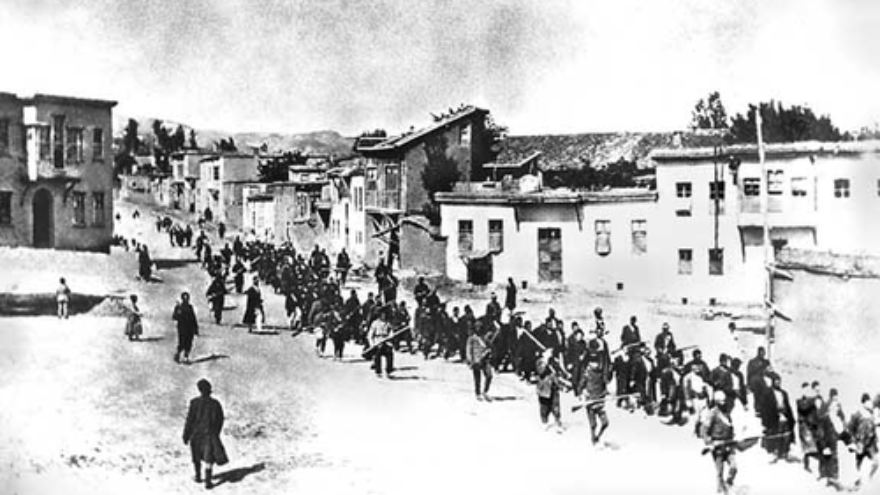 Armenians are marched to a nearby prison in Mezireh by armed Turkish soldiers in Kharpert, Armenia, in April 1915. Credit: Project SAVE via Wikimedia Commons.
Republish this article
742 WORDS
Spread the word.
Help JNS grow!
Share now:

(October 27, 2013 / JNS) Ninety-nine years after the Turkish genocide of the Armenians, one of the most poignant symbols of Armenian suffering is being held hostage—by the White House.

The prisoner is an 18-foot long rug. It was woven by four hundred Armenian orphan girls living in exile in Lebanon, as a gesture of appreciation for America’s assistance to survivors of the genocide. In 1925, they sent the rug to President Calvin Coolidge, who pledged that it would have “a place of honor in the White House, where it will be a daily symbol of goodwill on earth.”

Unfortunately, the rug is instead becoming a symbol of the unseemly politics of genocide. An Armenian-American dentist, Hagop Martin Deranian, recently authored a book called “President Calvin Coolidge and the Armenian Orphan Rug,” and the Smithsonian Institution scheduled an event about Dr. Dernanian’s book for Dec. 16. But when the Smithsonian asked the White House to loan it the rug for the event, the request was denied.

Reporters who asked the State Department about it this week were referred to the White House. When they asked the White House spokesman, they were curtly told that he had nothing to say except, “It is not possible to loan it out at this time.”

Armenian-American leaders believe the Obama administration is responding to pressure from the Turkish government, which denies that genocide took place. And Armenians have good reason to be suspicious. As a presidential candidate in 2008, then-Senator Obama declared, “America deserves a leader who speaks truthfully about the Armenian genocide.” By contrast, the statements that President Obama has issued each April on Armenian Remembrance Day have never included the g-word. Instead, he has used an Armenian expression—“Meds Yeghern,” meaning “the great calamity.” Fear of displeasing the Turks appears to be the only plausible motive for that rhetorical sleight-of-hand.

Armenian-Americans are not the only ones who should be upset. American Jews should be up in arms, too. Not only because of the sympathy that victims of genocide instinctively feel for one another—but also because if the White House can permit political considerations to trump recognition of the Armenian genocide, there is a danger that memorialization of the Holocaust could one day suffer a similar fate.

In any event, at least one president did keep his word: Calvin Coolidge proudly displayed the Armenian Orphan Rug in the White House for the rest of his term.

After he left office, Coolidge took the rug to his Massachusetts residence. It was still there in 1939, when former First Lady Grace Coolidge became a leading figure in the struggle to rescue a different group of children from a genocidal dictator. Mrs. Coolidge lobbied in support of the Wagner-Rogers bill, which would have admitted 20,000 German Jewish children to the United States. But President Franklin Delano Roosevelt refused to support the legislation, and it was buried in committee.

Ironically, FDR’s relative and predecessor, Theodore Roosevelt, advocated declaring war on Turkey over the Armenian genocide. “The failure to deal radically with the Turkish horror means that all talk of guaranteeing the future peace of the world is mischievous nonsense,” the then-ex-president asserted in 1918. Teddy Roosevelt was correct to fear that tolerating genocide would pave the way for it to happen again.

Indeed, Adolf Hitler reportedly once assured his subordinates that their atrocities would not be remembered, saying, “Who, after all, speaks today of the annihilation of the Armenians?”

The genocide rug eventually made it back to the White House and was in use during at least part of the Clinton administration. But it has not been seen in public since then. If the Obama administration and the Turkish government have their way, it seems, the imprisoned rug may never again see the light of day.

In December, Americans will flock to a new movie called “Monuments Men.” Directed by (and co-starring) George Clooney, it will tell the true story of a handful of U.S. military personnel who risked their lives to rescue famous paintings, monuments, and other precious European cultural artifacts from the Nazis in the waning days of World War II. It seems that it might take a new generation of Monuments Men to rescue the Armenian genocide rug and restore the treasured heirloom to its rightful place—in a public display.

Dr. Rafael Medoff is director of The David S. Wyman Institute for Holocaust Studies, in Washington, D.C. His latest book is “FDR and the Holocaust: A Breach of Faith.”