(January 21, 2021 / JNS) This week marks six years since Argentine Special Prosecutor Alberto Nisman was found lifeless in his apartment. He was found dead the day before he was to provide evidence to the Argentine Congress he said proved that then-president Cristina Fernandez de Kirchner, in a massive coverup, sought to absolve Iran of its role in the 1994 bombing of the AMIA Jewish community center in Buenos Aires. The terrorist attack killed 85 people and wounded hundreds more. Nisman spent a decade undertaking granular research of how Iran planned the attack, used its embassies to coordinate it and recruited Hezbollah operatives to carry it out.

But justice has proven elusive for victims of the AMIA bombing and for Nisman.

On Dec. 23, victims’ hopes of at least one conviction in the AMIA bombing were dashed as an Argentine federal court announced the acquittal of Carlos Telleldin, who allegedly purchased the Renault van. It was the van—fitted with 606 pounds of ammonium nitrate explosives and driven into the AMIA—that detonated and brought down the five-story community center.

Telleldin was the one remaining Argentine facing accountability for the attack. The AMIA quickly said it would appeal the court’s decision, stating, “The evidence collected is more than enough to achieve the degree of certainty and to convict the accused.”

Kirchner had at one time supported the positions taken by the AMIA leadership about the bombing. She had used speeches before U.N. General Assemblies in 2008 and 2009 to demand that Iran turn over individuals Nisman had named in the plot to bomb the AMIA and for whom Interpol had issued red notices, which call on countries to apprehend suspects.

The tide turned in 2013 when her government signed a Memorandum of Understanding (MOU) with Iran to jointly investigate the terrorist attack. Nisman believed the MOU was not an effort to find the true culprits, whom he had already identified. He believed it was signed to send Interpol the message that the two countries were supposedly cooperating, and thus would lead the international police organization to remove the red notices for the remaining five senior Iran officials and one Lebanese man Nisman found had planned the bombing. The MOU, Nisman believed, was akin to asking an arsonist to help investigate a fire.

In 2015, an Argentine court ruled the MOU was unconstitutional. Kirchner’s successor as president, Mauricio Macri, proceeded to abrogate the MOU, but Interpol has disregarded Macri’s actions and considers the MOU valid. This has further led to suspicion by victims’ families that Interpol may be in cahoots with Kirchner and her cronies to weaken, if not lift, the red notices.

In 2017, Argentina’s Gendarmerie security forces determined Nisman’s death was a homicide. This finding was endorsed by Judge Julian Ercolini and prosecutor Eduard Taiano, who concluded there was a “criminal plan to end the life of Alberto Nisman.” They said, “The death of prosecutor Nisman was not due to suicide.” It matters because if Nisman committed suicide, there would be no murder to investigate, and therefore, no one to hold accountable for his suspicious death on the evening before he was due to present his evidence against Kirchner. 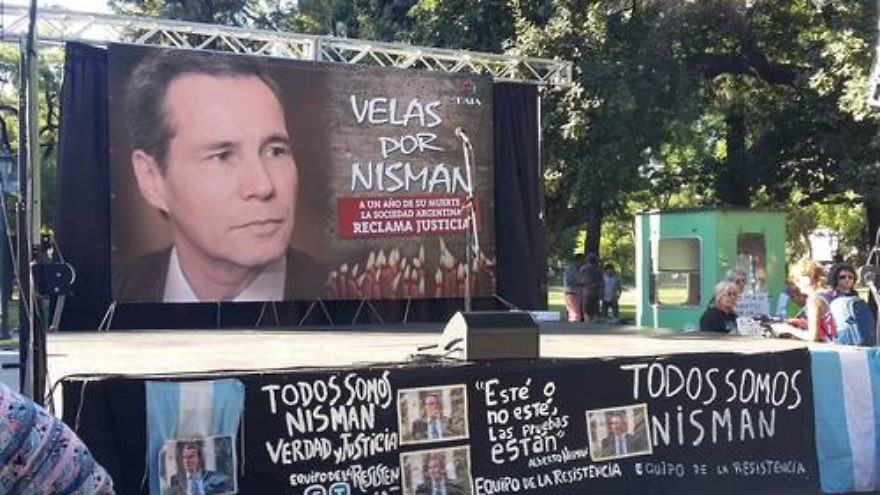 A protest in Buenos Aires marked the one-year anniversary of the death of Alberto Nisman, the Argentinian federal prosecutor who was investigating the AMIA Jewish center bombing, January 2016. Credit: Wikimedia Commons.

The investigation into his death continues. This week, Taiano announced that he is seeking 89 current and former intelligence agents to testify as witnesses to explain the unusual “explosion of phone calls” they made in the vicinity of Nisman’s apartment in the days leading up to and following the murder.

Should Sabina Frederic, Argentina’s minister of security, issue her own report on Nisman’s death, it will likely be influenced by recent comments made by the president. In a Dec. 31 interview with Radio 10, President Alberto Fernandez (not related to Cristina Fernandez de Kirchner) said he “had been thinking about” Nisman and now believes that he committed suicide, citing no basis for the reversal of his position.

His comments are troubling given that in 2015, four years before Kirchner became his vice president in 2019, he had penned an op-ed saying he had “no doubt” Nisman was murdered. Only after Kirchner became his vice president did he reverse his views, awkwardly stating in a January 2020 interview with Netflix, “I doubt Nisman committed suicide,” then added, “but there’s no proof of murder.”

His comments on Radio 10 coincide with the government’s uptick in disparaging statements by government leaders about Nisman in the run-up to the sixth anniversary of his murder.

While Nisman is no longer alive, the case he sought to bring against Kirchner remains. After Nisman’s death, a judge used the allegations that Nisman planned to present to Congress as the basis for a new investigation. That case against Kirchner and her associates is due to go to trial, though the court has yet to set a date. One of those who stands charged along with Kirchner is Carlos Zannini, who today is Argentina’s attorney general of the Treasury. Many are skeptical that either Kirchner or her alleged collaborators will be brought to justice.

Kirchner’s actions seem to signal that she wants anything associated with the AMIA bombing—the case against Telleldin, the search for Nisman’s assassins and allegations that he was murdered, and the cover-up allegations against herself—to go away.

But Kirchner may have a plan B, should her plans to unravel the cases in which she or her associates are implicated do not succeed. The Argentine press has speculated that she may either arrange for amnesty in these cases, a move that would require approval by the Argentine Senate, or she may arrange for President Fernandez to pardon her.

Argentina’s justice system has long been plagued by rampant corruption. It would be concerning if Argentina were to allow Kirchner or others to be unjustly absolved of accountability in cases associated with the coverup of the AMIA bombing and Nisman’s murder. While that decision is up to the government, it would no doubt be factored into assessments by international institutions that weigh corruption, stability and risk.

But one of the biggest opportunities for justice is ensuring that the Interpol red notices remain in force. The international community should ensure that whatever ploys Kirchner may use to evade accountability for herself and her associates are not allowed to be used to let Iran off the hook for its role in the AMIA bombing. Nisman’s investigation into the bombing provided the world with the necessary information to hold Iran accountable, for which he ultimately paid with his life. His death should not be in vain.

Toby Dershowitz is senior vice president for government relations and strategy at the Foundation for Defense of Democracies, a nonpartisan think tank based in Washington, D.C., that focuses on foreign policy and national security. Follow her on Twitter @tobydersh.