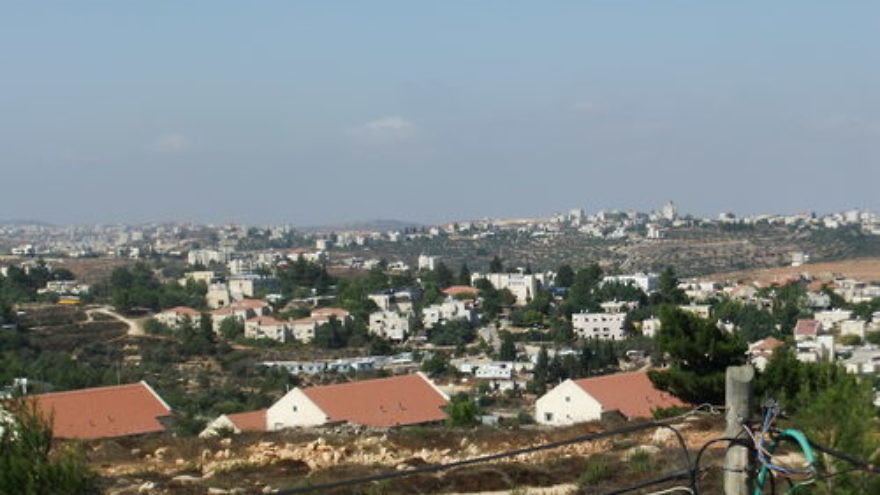 (December 17, 2013 / JNS) If international legitimacy for the settlement enterprise were a horse, one could say that it’s been long out of the barn. Those roaming the halls of power worldwide—from the White House in the era of Barack Obama and John Kerry to the United Nations—have for years regarded the territories of Judea and Samaria as Palestinian territory that is currently under occupation.

The hostile attitude toward the settlement enterprise is a natural, direct derivative of this premise. If we were to make a gross generalization, the world has adopted the Palestinian narrative as it relates to the legal status of the territories. Even those who negotiate on behalf of the State of Israel, men and women who officially adhere to the party line that Judea and Samaria, the cradle of Jewish civilization and peoplehood, is not occupied territory, have long ceased to make this statement publicly, just as they haven’t even bothered to make use of a long list of legal and historical arguments that support this position.

While it may seem that this train has long left the station, for months now a counterattack has been waged over “the historical, legal truth.” This is a campaign that is being waged by hundreds of jurists from Israel and abroad who aren’t making do with the usual “rights of our forefathers” or “Zionism” rejoinders that are now devoid of currency in the international arena and the High Court of Justice.

Last summer, right-wing organizations and settlers managed to bring together a number of highly regarded legal minds—including those who are not traditionally aligned with right-wing politics. These individuals set out on a mission to change the terminology and the legal discourse that the left has assumed control of for quite some time.

The battle over the narrative

The so-called “new” jurists are really just dusting off old arguments that were first made and eventually accepted in the initial years following the Six-Day War. This new line of discourse categorically rejects the premise of “occupied territories.” The State of Israel did indeed conquer Judea and Samaria in 1967 as the result of a war of self-defense, but from a legal standpoint these territories are not occupied since the foreign power that held these territories between 1948 and 1967—Jordan—did so illegally.

These jurists note that with the exception of Britain and Pakistan, the international community refused to recognize the Jordanian annexation of the West Bank. Therefore, the legal status of these territories is in dispute. From the standpoint of international law, there is an enormous difference between occupied territories and disputed territories.

Those who bolster this argument—and some jurists do indeed do this—with what is referred to as “the historic right of the Jewish people to sovereignty over the Land of Israel” add another legal statement in support of their case: “Demanding the right to this sovereignty, which supersedes any counter-demand by the Palestinians.”

Jurists like Professor Talia Einhorn or Professor Eliav Shochetman, who are two of the more active legal experts in the group, note that this right was recognized by the international community from the time of the British Mandate for Palestine. This legal document granted national rights solely to the Jewish people, which were in turn reaffirmed in Article 80 of the United Nations Charter.

The renaissance that the “new jurists” are trying to infuse into the Judea and Samaria discourse has for years been trumpeted on the website of the Israeli Foreign Ministry. It has even been articulated into a codified doctrine by the former president of the Supreme Court, Meir Shamgar. This case rested on a number of international resolutions and historical facts that were almost wiped clean from the public record, but in recent years have been resurrected by a number of organizations.

Two of these groups are drawing the most attention. First, there’s the Regavim Institute’s Center for Zionism, Justice, and Society. For years, Regavim has provided assistance in court cases that hear petitions brought on by left-wing groups against settlements in Judea and Samaria. The other organization is the Legal Forum for the Land of Israel, which was originally founded as a group dedicated to pursuing legal means to defeat the disengagement plan.

The Center for Zionism’s inaugural recently took place in Jerusalem. The occasion featured the unveiling of an impressive new book that delves into property laws and international law in Judea and Samaria.

One of the most noteworthy articles appearing in the book was written by Col. (res.) Daniel Reisner, the former head of the international law department in the IDF Military Advocate General’s Corps. Reisner is a jurist who is not aligned with the political right and who recognizes that the Palestinians also have claims to Judea and Samaria. In his article, he expresses understanding for Israel’s formal position “because since the territories of Judea and Samaria were never a legitimate part of any Arab state, including the Kingdom of Jordan, it is impossible to determine that Israel is an occupier in Judea and Samaria in the accepted legal definition.”

“Israel didn’t conquer these territories from any state because Jordanian control of the West Bank was illegal. If Israeli control over Rachel’s Tomb in Bethlehem in 1967 was illegal because of the illegality of taking over a territory by force, then the Jordanian occupation of that same complex in 1948 suffers from exactly the same problem,” Reisner said.

From Jerusalem to Al-Khader

Reisner recommends that we do not take the simplistic approach of treating Judea and Samaria as a single, solitary entity.

In addition, Reisner finds legal backing for distinguishing between territories and specific sites in Judea and Samaria. Such language can be found in U.N. Security Council Resolution 242. The wording of the resolution calls for “withdrawal of Israeli armed forces from territories conquered” in the Six-Day War. It doesn’t call for withdrawal from “the” territories.

“This shows that there really isn’t an insistence on all of the territories that were captured during the war,” Reisner said.

Reisner is convinced that Israel “needs to make its case cogently from a legal, political, and historic standpoint simply because it has its own truth that is backed up by facts.” But if there is a legal case to be made, why don’t Israel’s negotiators use it in the current final-status talks with the Palestinians?

“Because inside the negotiating room it’s almost irrelevant,” said Reisner. “International law has a relatively marginal role to play in Israeli-Palestinian agreements. The bottom line is the one that both sides need to live with.”

Alan Baker, an attorney and a member of the Levy Committee which was formed in 2012 to investigate the legal status of the outposts and the settlements and which came to the conclusion that Judea and Samaria are not occupied territories, echoes much of Reisner’s sentiment.

“The Israeli government for years has refrained from waging a hasbara (public diplomacy) campaign based on advancing our rights,” Baker said. “Instead, it has waged a hasbara campaign based on apologies. The right thing to do was to operate out of a sense of advancing our rights, the rights of the Jewish people as an indigenous nation in its land.”

Baker said Israel “has refrained from emphasizing that what we are dealing with is not occupation.”

Bezalel Smotritz, a senior figure at Regavim, said that while his organization adopted the “offense-is-the-best-defense” approach in its arguments before the High Court of Justice, he and his friends realized that they were busy “putting out fires.”

“The settlement enterprise in Judea and Samaria exists today within the bounds of an untenable legal situation which is the byproduct of the judicial delegitimization that has been waged for years by the left against Judea and Samaria and the settlements there,” he said. “These bounds toe the line between ‘illegitimate’ and ‘war crime.’”

“If we seriously want to deal with the justice system as it relates to the settlements, there is no alternative but to equip ourselves with a legal bulldozer and break through,” Smotritz added. “We need to establish an entirely different legal foundation which will enable the settlement enterprise to breathe and combat the legal delegitimization, and to convince the public that settlements are legitimate.”

A longer version of this story was originally published by Israel Hayom, whose English-language content is distributed exclusively by JNS.org.