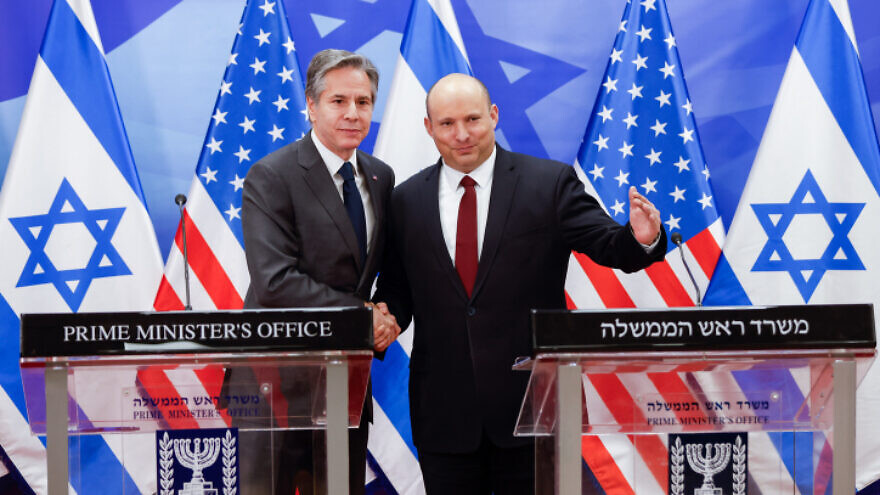 (March 27, 2022 / JNS) Israeli Prime Minister Naftali Bennett and U.S. Secretary of State Antony Blinken met in Jerusalem on Sunday. They discussed a range of issues, including Russia’s war in Ukraine, the Iran nuclear deal, the Abraham Accords and the Palestinians, according to Bennett’s office.

“We are concerned about the [U.S.] intention to delist the Islamic Revolutionary Guards Corps [from the State Department’s Foreign Terrorist Organization (FTO) list],” said Bennett at a joint press conference after the meeting. “I hope the United States will hear the concerned voices from the region—Israel’s and others—on this very important issue.”

Blinken also addressed the Iran issue, saying, “There’s no daylight between us on the fundamental proposition that Iran must never be allowed to acquire a nuclear weapon.”

Whether or not there is a return to the Iran nuclear agreement, he said, “that principle will not change, nor will our commitment to it.”

“Deal or no deal,” he added, “we will continue to work together and with other partners to counter Iran’s destabilizing behavior in the region.”

Turning to the Palestinian issue, Bennett said his government “is working very hard to improve the lives of Palestinians in the West Bank and Gaza.”

Part of those efforts, he said, involve the approval of Israeli work permits for 20,000 workers from Gaza, and the investment of 40 million shekels ($12.4 million) in improving the crossings between Israel and Gaza.

“Even if we can’t solve everything,” he said, “it doesn’t mean you don’t do anything.”

Blinken emphasized the “conviction the U.S. has that Israelis and Palestinians deserve to enjoy equal measures of freedom, security, opportunity and dignity.”

“That’s one of the reasons we support a negotiated two-state solution,” he said.

He also discussed ways to foster a peaceful Passover, Ramadan and Easter.

“That means working to prevent actions on all sides that could raise tensions,” he said, “including settlement expansion, settler violence, incitement to violence, demolitions, payments to individuals convicted of terrorism, evictions of families from homes they’ve lived in for decades. It’s a message that I’ll be underscoring in all of my meetings on this trip.”

With regard to Russia’s invasion of Ukraine, Bennett said Israel “stands firm with the people of Ukraine” and lauded Israel’s field hospital set up there last week.

Blinken thanked Bennett for his “important diplomatic efforts to end the Russian government’s aggression against Ukraine,” and also for “continuing to strengthen what is an enduring and powerful friendship between Israel and the United States.”

Bennett concluded his remarks by thanking Blinken, saying, “Israel greatly appreciates America’s commitment to our security. The alliance between the United States and Israel is as strong as ever. And though we may have our differences, as friends do, it remains unbreakable.”

Earlier on Sunday, Blinken met with Israel’s President Isaac Herzog at his official residence in Jerusalem.

“Your visit means a lot to us and we welcome you wholeheartedly here in Jerusalem,” said Herzog.