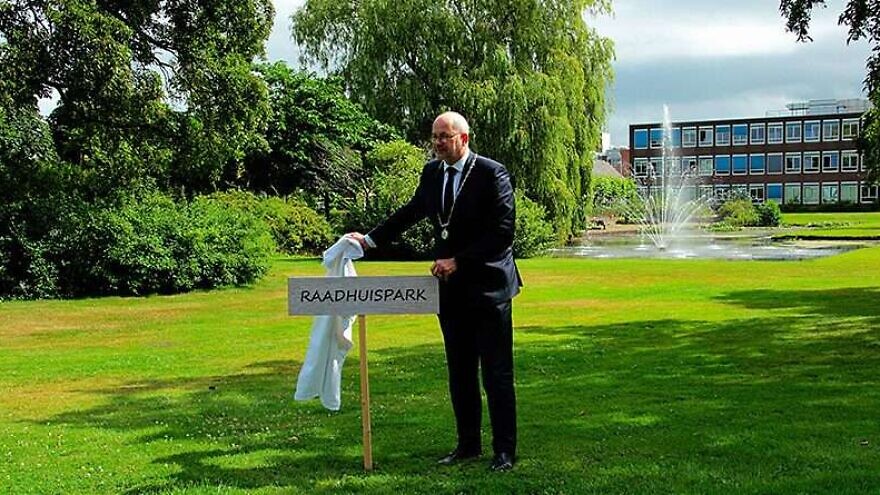 (August 17, 2022 / JNS) A municipality in the Netherlands has renamed a park that was originally named after a mayor who helped Nazi forces find all the Jews in his city, according to the Dutch-language news website Jonet.nl.

The municipality of Hogeveen, northeast of Amsterdam, renamed the former Mayor Tjalma Park as “Raadhuispark” (meaning “Radius Park”) on July 26.

Local historian Albert Metselaar discovered that Jetze Tjalma, who was mayor of Hoogeveen—a municipality and a town in the Dutch province of Drenthe—from 1927 to 1958, was one of the first mayors in Nazi-occupied Holland to voluntarily give the Nazis a list of local Jewish residents. He also had a sidewalk built over part of a local Jewish cemetery, which was returned to the Jewish community in 2019, reported Jonet.

Following World War II, Tjalma was made an honorary citizen of Hoogeveen. The park was named after the former mayor shortly after his death in 1985.

After the Amsterdam-based NOID Institute for War, Holocaust and Genocide Studies did its own investigation into Tjalma’s cooperation with the Nazis and came to the same conclusion as Metselaar, the municipality changed the park’s name.

Tjalma was also posthumously stripped of his honorary citizenship and a local fire station named after him was also given a new name, according to Jonet.