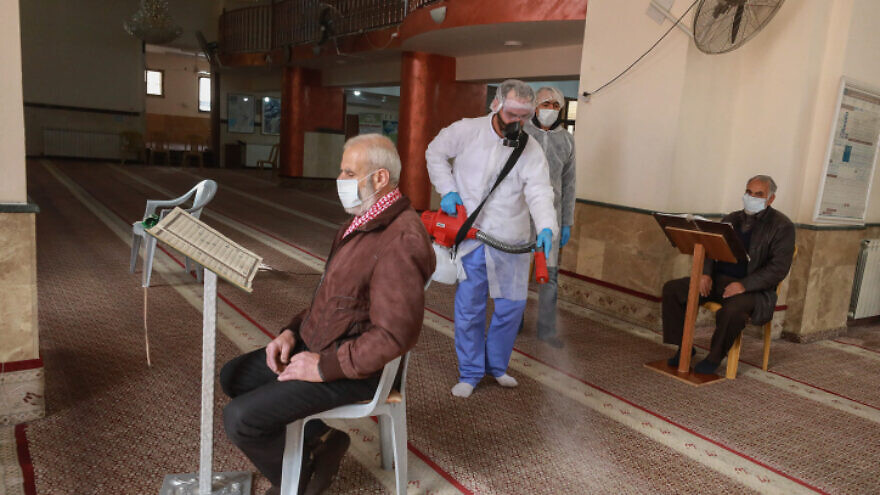 Palestinian workers disinfect a mosque as a preventive measure against the coronavirus in Ramallah on March 7, 2020. Photo by Flash90.
Spread the word.
Help JNS grow!
Share now:

Among the Israelis hospitalized with COVID-19 is a 38-year-old eastern Jerusalem man in serious condition, who is believed to have contracted the disease from a group of Greek pilgrims. At least two of the new patients tested positive after returning from trips to Spain, and at least one after returning from Italy. Additional patients had returned from Switzerland and Austria.

Since Friday, the Israel Defense Forces has been overseeing the guided exit of dozens of tour groups from Palestinian Authority-controlled areas, transporting foreigners directly to Ben-Gurion International Airport for immediate departure, in coordination with multiple foreign embassies and consulates.

Authorities have tried to make the process as pleasant as possible for the visitors, providing refreshments and assistance at the airport, including procuring tickets and even special flights for some of the tourists.

Reports indicated that the ministry would add U.S. flights from New York, California and the state of Washington to the list of those requiring passengers to enter two weeks of self-quarantine, but the matter has been a source of dispute among officials due to diplomatic and economic concerns.

“This decision has internal significance in the United States. It is important to work on this issue in cooperation with the Americans,” Israeli Tourism Minister Yariv Levin told Army Radio on Sunday.

Hundreds of Israeli attendees of this year’s AIPAC conference in Washington were sent into a panic over the weekend, when conflicting reports indicated that they would have to enter self-quarantine after the organization reported that two people who came into contact with a group of conference-goers were infected with COVID-19. It was ultimately confirmed that attendees who returned to Israel prior to March 5 did not have to isolate themselves.

However, new directives include barring Dutch foreigners, and imposing self-quarantine on all Israelis returning from Holland. Andorra and San Marino have also been added to the no-fly list.

On Saturday, Air France announced that it had halted all flights between Paris and Tel Aviv until March 28.