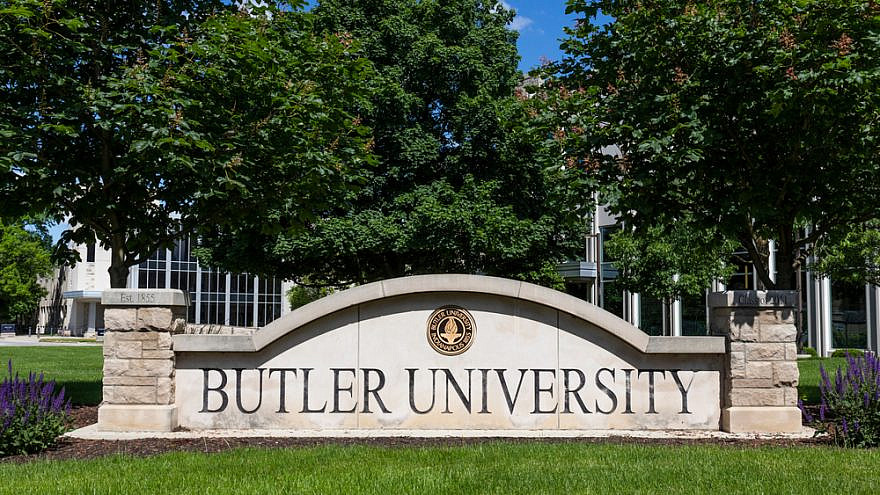 (April 9, 2021 / JNS) Butler University in Indiana said Jewish students had nothing to do with the postponement of an event with longtime political activist Angela Davis, despite false accusations circulating on campus targeting the Jewish student body.

The school’s student-run newspaper, The Butler Collegian, published a letter to the editor on March 30 by Students for Justice in Palestine, Jewish Voice for Peace and the Muslim Student Association, saying that administration “canceled” an April 1 virtual event titled “Joint Struggle and Collective Liberation” with the 77-year-old Davis, an outspoken supporter of the BDS movement against Israel.

The letter claimed that “days before Butler University’s shameless censorship of Dr. Angela Davis, the Student Government Association [SGA] was bombarded by pressure from Zionist students who claimed to oppose Davis’ event because of her support for [the] Boycott, Divestment and Sanctions (BDS) movement,” which the groups describe as “a grassroots demand for nonviolent economic pressure against Israel’s illegal military occupation of Palestine.”

It added: “Simply put, Butler and others try to silence marginalized voices in order to maintain systems of power and privilege. This is not the first time that Zionists have attempted to deplatform Angela Davis for her supportive stance on Palestine.”

Frank Ross, Butler’s vice president of student affairs, confirmed that no student issued a formal complaint or requested that the program be altered or canceled, and that the issue had more to do with funding. He said miscommunication about the facts has led to “tremendous misunderstanding, finger-pointing and hurt.”

He said the university is working to host Davis as a speaker this semester with funds coming from the general university budget, not SGA’s budget.

The campus Hillel, in its own letter to the editor published in the Collegian on April 1, affirmed that Jewish students “played no role” in the school’s decision to postpone the event and “never advocated that Angela Davis should not be allowed to speak.”

“We have always supported the right of any student organization to host any speaker they choose on this campus. Our concerns have always been about whether SGA … should officially co-sponsor and pay for events that marginalize a group of students,” it said.

The Jewish group said the fallout has caused “real harm to Jewish students on our campus,” noting the accusations “draw on and perpetuate the age-old anti-Semitic tropes of Jewish power/control, scapegoating and silencing.”

Student president of Hillel Lauren Carrier said the misinformation in the original letter to the editor resulted in an “outcry on social media blaming the ‘Zionists’ and students involved in Butler University’s Hillel for the postponement. … Jewish students have been targeted and called out in our classrooms, dorm rooms, Greek [life] houses and social circles. This has caused Jewish students to feel uncomfortable and not welcome on campus.”

She added that the paper “has a duty to make sure that information that is published is factually accurate. Much of the information shared and verbiage used was false, incredibly negligent and caused unnecessary harm towards a minority group on campus.”

On April 5, The Butler Collegian published a lengthy article clarifying that concerns by Jewish students in regards to the event were solely about SGA sponsoring the program because portions of the funding come from Butler’s student activity fees.

Carrier said she hopes to see further action from the administration, including the implementation of “training focused on religious discrimination for faculty, staff and students. I believe that education is the best way to prevent situations like this in the future.”