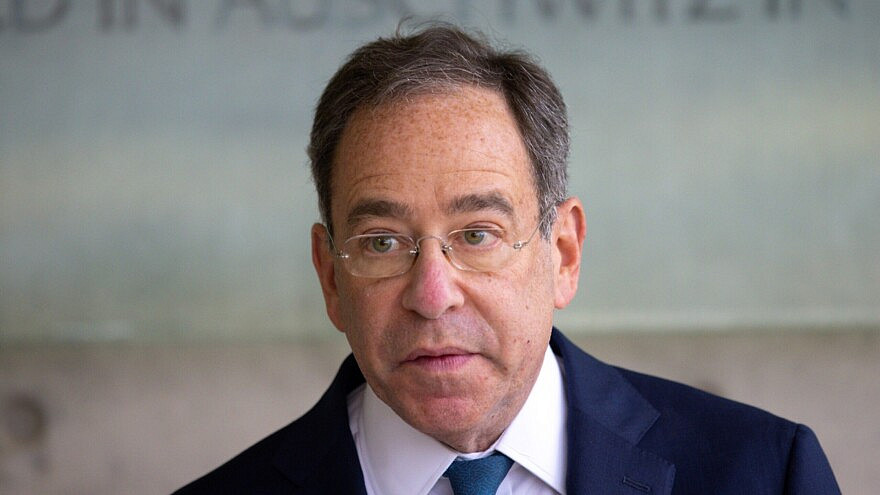 (September 5, 2022 / JNS) U.S. Ambassador to Israel Thomas Nides said Monday that the Biden administration is committed to preventing Iran from acquiring a nuclear weapon and that its commitment to Israel’s security is “iron clad,” though he also emphasized that the White House wants a “diplomatic solution” to the issue.

Speaking with journalists in Jerusalem, Nides emphasized, “We stand by Israel to make sure Iran never obtains a nuclear weapon. That is also in our national security interest, and we’ve repeated that over and over again.”

He reiterated previous pledges made to Israel by President Joe Biden, saying, “We will never tie Israel’s hands in the event that Israel needs to defend itself.”

“We understand the aggression of Iran and we will never tie Israel’s hands,” Nides repeated, adding that Biden had made this “very clear” to Israeli Prime Minister Yair Lapid.

However, he qualified, “We would like a diplomatic solution” to the Iranian nuclear issue, “but only under the conditions the president laid out with our European colleagues.”

“There’s many gaps and conditions” Nides said of the ongoing negotiations, which “have not been resolved yet.”

Nides pointed to the U.S. insistence on keeping Iran’s Islamic Revolutionary Guards Corps on the Foreign Terrorist Organizations list as proof that the American president “is a man of his word.”

Nides’s remarks came as Senators Robert Menendez (D-N.J.) and Lindsey Graham (R-S.C.) visited Jerusalem. Israeli media reported that Menendez, who is Chairman of the Senate Foreign Relations Committee, said that Biden has pledged to seek congressional approval for any deal with Iran.

A vote would be held on any prospective accord, Menendez said, but noted that he was not sure such a move “would meet the threshold under the law to nullify the agreement.”

For his part, Graham stressed that, “The relationship between the U.S. and Israel will remain strong and unshakable.”

Meanwhile, AFP on Monday reported that European Union foreign policy chief Josep Borrell expressed pessimism about the prospects for a deal, saying developments at the talks in Vienna made him “less confident” that a compromise would be reached.

“The last interaction is not converging, it is diverging,” he said. “That is very much worrisome, if the process does not converge.”

“The whole process is in danger,” Borrell said.