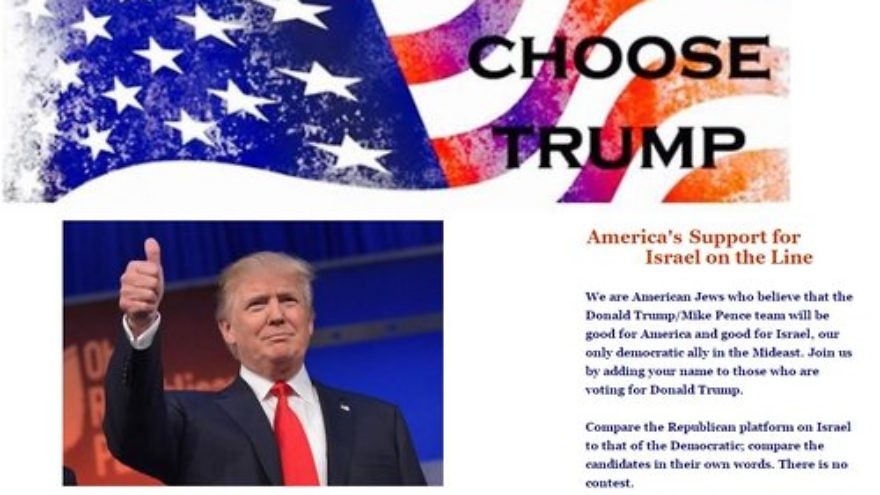 (August 26, 2016 / JNS) With the Nov. 8 Presidential election just months away, Democratic candidate Hillary Clinton and Republican candidate Donald Trump are pulling out all the stops to win over as many key demographic groups as they can.

The American Jewish community – while relatively small compared to other groups due to its historic outsized influence in politics and American culture – plays a significant role for both campaigns.

Outside the official channels, a group of grass roots Trump supporters are seeking to make their own impact on the election and promise not to remain silent when it comes to Israel’s security and future.

The grass roots group, “Jews Choose Trump,” was formed in late July by Carol Greenwald, a financial advisor at an investment firm in Bethesda, Md., along with several partners, including Jewish activist and founder of JCCWatch.org Richard Allen.

Greenwald has a long history of Jewish community activism and says she lives by the biblical verse Isiah 62:1, “For Zion’s sake I will not keep silent.” She was motivated to start the website JewsChooseTrump.org after becoming fed up over accusations by liberals that Trump was anti-Semitic.

“Trump is someone who’s worked with the Jewish community his entire life and has family, including his daughter (Ivanka Trump) and son-in-law (Jared Kushner), who are both observant Jews,” Greenwald said. “The smearing of Trump as anti-Semitic is just outrageous.”

Greenwald was motivated to start the group by the silencing in the Jewish community of anyone who supports the Republican candidate.

JewsChooseTrump.org has steadily grown with Jewish supporters of Trump from across the country signing up to express their solidarity and looking for ways to get involved. The website has had over 78,000 visitors and over 1,000 people have signed up to publish their names, Greenwald said.

“We’ve been overwhelmed by the velocity of social media in getting out our message of Jewish support for Trump,” said Allen, who’s been handling social media for the group. “We have over 40 states with activists that stand for Trump in their communities. Our Jews Choose Trump Facebook, Twitter, Pinterest and website are on fire with activity. The use of this alternate unbiased network of social media sites has changed the dynamic in reaching Jewish Trump supporters.”

The outpouring of support the group has gained comes despite some early negative issues for Trump.

During the Republican primary season, many prominent conservative Jews were cautious in their support for him and some backed Republican candidates such as Florida Sen. Marco Rubio. In particular, some were concerned over statements Trump made such as saying to a group of Jewish donors in December 2015 that he’s “a negotiator like you folks,” which some accused of playing into Jewish stereotypes, or that he would be “neutral” in the Israeli-Palestinian conflict.

But after securing the nomination, the Trump campaign has focused on growing its support within the Jewish community including campaign promises to overturn the Iran nuclear deal, recognizing Jerusalem as the capital of Israel, fighting the Boycott, Divestment and Sanctions (BDS) movement and opposing any measures to impose or dictate borders on Israel.

“The Republican platform has the most pro-Israel statements in it than any platform in American history and a lot of those changes were pushed by the Trump campaign,” Greenwald said.

The Iran deal, a game changer

In particular, most troubling to Greenwald is Clinton’s support for the Iran nuclear deal, which was a key foreign policy goal of President Barack Obama in which Clinton played an early role in when she was secretary of state.

“Most Jews love Israel and they worry about the security of their children and grandchildren. The Iran deal endangers this security,” she said.

Echoing that idea, the Iran deal has been a deal breaker for many Jewish pro-Israel supporters, who may not be crazy about Trump but who refuse to support Clinton.

Jewish billionaire hedge fund manager Seth Klarman, a major giver to pro-Israel causes, has said publicly he would not back politicians who supported the Iran deal, which paves the way for the terror regime to obtain nuclear weapons.

Klarman, who backed Jeb Bush, Chris Christie and Rubio during the primary season, came out earlier this month supporting Clinton. Klarman declined to comment to JNS.org about his decision to back Clinton who had a hand in the Iran deal.

“Anyone who supported the Iran deal [should be] automatically disqualified from political office in this country,” Abramowitz told JNS.org. “Negotiating with terrorists and providing them money during our state of war was providing material support for terrorism.”

Abramowitz said he grades politicians on three issues; their ability to grow the economy, protect our culture and protect our nation. “Trump would get a ‘B,’” he said. “I’m hoping over the next few weeks, he evolves. As he gets more input on issues, he has the ability to reach an ‘A.’ Hillary would get an ‘F.’ She has no chance of upgrading herself.”

While historically the American Jewish community has been heavily Democrat, trends over the last two presidential elections indicated a small shift in support among Jewish voters towards the Republican Party. In the 2008 election, Obama garnered 78 percent of Jewish voters, according to exit polls. But by the 2012 election, that number fell to 69 percent, with Republican nominee Mitt Romney gaining 30 percent of the Jewish vote, one of the highest totals ever.

However, the decline of Jewish voter support for Obama may have more to do with his own personal clashes with Israeli Prime Minister Benjamin Netanyahu, and may not directly translate into success for Trump courting Jewish voters away from Clinton.

Tevi Troy, a presidential historian and former White House aide for the George W. Bush administration, said in four of the last five elections, the GOP share of the Jewish vote has gone up.

“The only exception is 2008 which was a slight dip from 2004,” said Troy, author of the forthcoming book, “Shall We Wake the President? Two Centuries of Disaster Management from the Oval Office.” If the trend continues, he said, the GOP share should go up, “but I’m not sure what the Trump effect will be,” he added.

However, a recent survey conducted by polling firm GBA Strategies among 500 Jewish voters in Florida from Aug. 4-8 found that 67 percent supported Clinton versus only 23 percent for Trump. According to GBA Strategies, these voters prioritized “the economy, the environment, immigration policy and the Supreme Court by large numbers over the issues of Israel or Iran.”

Despite the uphill battle in gaining more Jewish support for Trump, in a close election even a small number of voters in important states could swing the election to either candidate.

Out of the over 1,000 names registered on JewsChooseTrump.org, a significant portion of them – roughly 15 percent – are from a localized area around Boca Raton, Fl., Greenwald said.

Home to one of the country’s largest Jewish communities, Florida is likely to play a key role in determining who wins in November. Greenwald says her group plans to contact people on the list in important battleground states like Florida, Ohio and Pennsylvania and encourage them to speak out in favor of Trump by writing op-eds, handing out literature and speaking at Jewish events in their community.

Beyond that, Greenwald and Allen said they’re planning on launching a “Rabbis Choose Trump” group soon to reach out to more Jewish voters. The group also started selling a limited edition “Trump Kippa” to “show off your Jewish and patriotic pride,” with 10 percent of the proceeds going to help lone soldiers serving in Israel.

As the election nears, Greenwald said they wish the outpouring of support will translate into action to “get the word out that Trump is the pro-Israel candidate and hopefully have an impact on the election.”