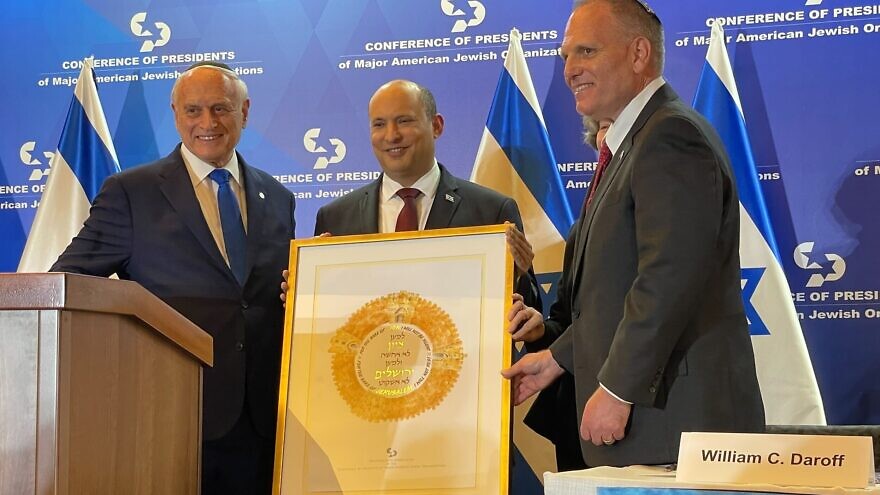 His statements to the Conference of Presidents of Major American Jewish Organizations—delivered in English ahead of Israel’s prime-time evening news and geared towards an international audience—were made ahead of the expected signing of a new nuclear agreement between Iran and world powers in Vienna.

Bennett said his government is “deeply troubled by what we see” in the talks and warned that a new agreement “is going to make it much, much harder for us” to defend ourselves.

“The emergent deal is highly likely to create a violent, volatile Middle East,” he stated.

Yet despite the challenging situation in which world powers are now placing Israel, Bennett asserted: “Let me be clear. One way or another, I have no doubt that Israel will prevail over whatever circumstances we face.”

“Israel will always retain its freedom of action to defend itself,” said Bennett, adding that it is “building unprecedented military capabilities.”

“We have to be by far the strongest country in the region,” said Bennett.

He also stressed that Israel is “not against any deal per se” but noted that “even those who supported the [original Joint Comprehensive Plan of Action] back then are afraid of this deal right now.”

He explained that the “biggest problem with this agreement is the sunset clause,” according to which, he said, “in two-and-a-half years, [Iran] will be allowed a nuclear breakout. It puts Iran on the fast track to nuclear development.”

“Iran will be able to set up centrifuges” on areas “the size of a football field … and it will be legal,” he said.

Discussing the logic behind any deal, Bennett noted that “the rial is at its lowest point in history, and we are now about to pour tens of billions of dollars” to “enrich this brutal and incredibly corrupt regime. Much of this money will be directly funneled right away to attacking Israel, its allies and American soldiers in the Middle East.”

And billions, he said, will go to terror proxies, including “Hezbollah to Israel’s north and Hamas to the south.”

He predicted that the funds will lead directly to “more UAVS, more attacks on merchant ships, more rockets and attacks on Israel and our allies.”

Regarding the administration of U.S. President Joe Biden, which is championing a return to the Iran nuclear deal, Bennett acknowledged that Israel has “taken a non-confrontational approach. I am not looking to fight. I am looking to bring the best results for Israel. America will remain our biggest and strongest friend, but ultimately, it is us who will bear the consequences of this deal.”

“This is the hand we were dealt; it is what it is,” said the prime minister. “There is no point in playing the blame game. We need to address the challenges at stake.”