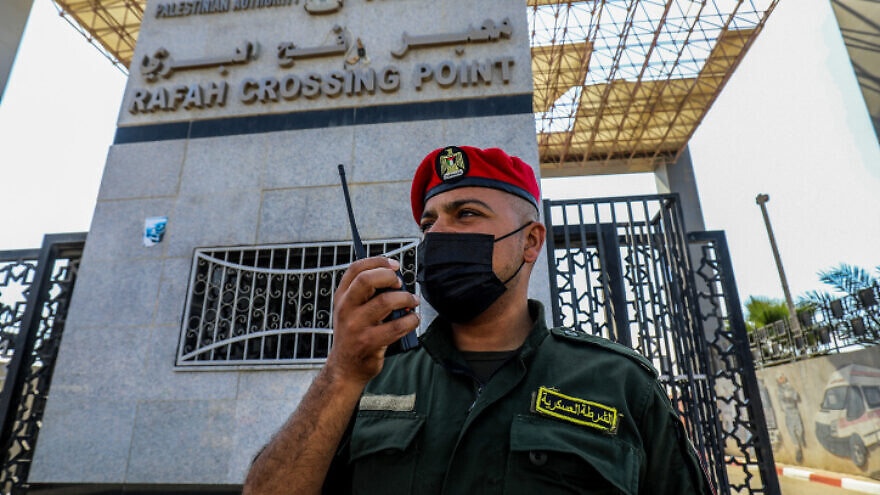 (February 2, 2022 / JNS) Egyptian mediation efforts and a delegation of intelligence officials visiting the Gaza Strip and Israel have been able to delay a new security escalation between Gazan terror factions and Israel, a former Israeli defense official has told JNS.

Col. (res.) David Hacham, a former Arab-affairs adviser to seven Israeli defense ministers and a senior research associate at the Miryam Institute, cited sources in Gaza as noting that Cairo was given an “ultimatum” by Hamas to promote a new arrangement for the Strip by the end of December.

“Sources in Gaza assess that a recent visit by an Egyptian delegation to Gaza delayed the escalation threats to a certain degree and enabled a certain calm to continue,” he said.

The escalation would have taken the form of border-fence rioting, incendiary balloons attacks on Israeli agriculture and other incidents, and would likely have escalated gradually, stated Hacham.

“We still have to take into account that incidents can spiral out of control at any time and lead to general conflict, even if Gazan terror factions initially intended to provoke a limited escalation,” he cautioned.

Egypt’s central goal is to prevent and limit any escalation, said Hacham, since Gaza is a “hornet’s nest that can project instability onto neighboring Sinai in Egypt.” Another eruption in Gaza could see new assistance to terrorists in Sinai, and that could also have a knock-on effect on Egypt proper, he added.

“Egypt does not want its mediation efforts to fail, as this would also harm their regional status and paint them as an insignificant mediator. It has a basic interest in consolidating stability in Sinai and preventing Gazan armed organizations from cooperating with Islamist subversive elements in Egypt,” he said.

As a result, the Egyptian General Intelligence Delegation has conducted intensive shuttle diplomacy in recent days, visiting Gaza last week after an earlier meeting with Israeli officials. The delegation met with the head of Hamas in Gaza, Yahya Sinwar, and other senior Hamas members.

The delegation presented the Hamas leadership with Israel’s answers to Hamas’s own demands. The fact that no escalation occurred after this visit “indicates that there are certain Israeli promises behind the scenes,” assessed Hacham.

“The Egyptians are not giving up and have not retreated since they do not want this to fail. They know the price of failure,” he said.

‘A legitimate pressure mechanism by Israel’

Meanwhile, Gaza continues to suffer from severe economic and humanitarian problems under the iron fist of Hamas. It suffers from high unemployment, crumbling infrastructure, homes that require reconstruction due to damage from past rounds of fighting, and unreliable water and electricity supplies.

In addition, said Hacham, Gaza can be ignited by “sparks” from other arenas, such as the West Bank, where friction is occurring on a daily basis between Israel and the Palestinians, the Temple Mount, the Old City and incidents in eastern Jerusalem.

“Under these circumstances, Israel has given approval for 10,000 workers and traders from Gaza to enter Israel to alleviate some of the pressure. But this is a drop in the bucket in light of Gaza’s 200,000 unemployed workers,” said Hacham.

“The general picture in Gaza can be characterized as ‘alert waiting.’ The key to unlocking a broader arrangement would lie in finding a solution to the prisoner issue,” he said, referring to Israel’s demand that Hamas release the remains of two Israel Defense Forces personnel who were killed in the 2014 Hamas-Israel conflict and two living Israeli civilians being held captive in Gaza.

Hamas has demanded the release of more than 1,000 Palestinian security prisoners in exchange, including those with blood on their hands from previous terror attacks. Israel has conditioned any broad new arrangement for Gaza on progress on the prisoners’ deal. “Tying these two things together is a legitimate pressure mechanism by Israel,” said Hacham.

“This is the most difficult and complex issue, and its positive conclusion would undoubtedly project on the remainder of issues surrounding Gaza,” he added.

Yet the gaps between Hamas and Israel on the prisoner issue remain “very wide,” said Hacham, with Hamas “taking a maximalist position that is nowhere near Israel’s minimum position. Hamas is showing no sign of compromise or flexibility on this issue.”

‘Egyptians began promoting projects of their own’

The rehabilitation of Gaza, which involves greater economic and humanitarian projects than the current supply of basic goods entering the Strip, continues to hinge on progress on the prisoner affair. “Since the 2014 ‘Operation Protective Edge’ and the 2021 ‘Operation Guardian of the Walls,’ Gaza requires infrastructure reconstruction, roads, building, electricity systems, water supplies, sewage systems and a boost to health systems,” said Hacham.

“The Egyptians began promoting projects of their own in Gaza to help stabilize it, including the construction of a road on the Gazan coast and the building of a new residential neighborhood in northern Gaza,” he noted.

Egyptian construction workers and engineers have been flowing into Gaza in recent months for those projects, including last week.

Also last week, Qatar’s Special Envoy to Gaza, Muhammad Al-Emadi, entered Gaza to meet with the Hamas leadership and to distribute $10 million: $100 for 100,000 needy families. “The Qatari grant has a humanitarian importance, but it certainly does not solve Gaza’s problems,” said Hacham.

Qatar also recently reduced its funding for Hamas’s 30,000 government officials, from $10 million a month to $3 million, saying that Hamas’s economic situation has improved. Hamas members, however, have denied that any such improvement has occurred.

Qatar also transfers $10 million per month for funding fuel that comes from Egypt and goes to Gaza’s power plant. In actuality, the fuel is sold to five local Gazan companies. Hamas funds salaries for its 30,000 government officials through the proceeds from the fuel sales to the companies.

“In summary, eight months after ‘Operation Guardian of the Walls,’ the situation on the ground remains sensitive and tense,” stated Hacham. “Sources in Gaza say we are in a time period in which escalation trends have to be taken into account as a realistic scenario. The situation is unpredictable and can develop in many directions. Still, the option of reaching a broader arrangement between Israel and Hamas exists.”

With the situation so close to potential conflict, Qatari assistance to Hamas and Gazans is a “painkiller that does not solve the substantial, festering problems,” said Hacham.

“The gaps between Israel and Hamas on the prisoner issue provide a basis that a gradual escalation will occur. No one can guarantee that it would be limited; events have their own dynamic,” he stated.

At the same time, the reported recent departure from Gaza of eight senior members of Hamas and Palestinian Islamic Jihad (six from the former and two from the latter), for Qatar, Lebanon and Turkey signal a desire by those members to take more influential positions in more comfortable locations, according to Hacham.

Once central reason for the departure is Sinwar’s firm, uncompromising grip on power in the Strip, said Hacham, which led the Hamas and Palestinian Islamic Jihad members to seek positions abroad.

“The most important reason for the departure is the desire to be released from Sinwar’s dominancy and chokehold,” he assessed. “Sinwar alone is responsible for decision-making in Gaza and choosing Hamas’s path. He grips the reigns tightly. Since under Sinwar they have no considerable influence, they have traveled abroad to seek influence.”

Another reason for the exit, he said, “is to leave the difficult conditions that characterize the situation in Gaza.”