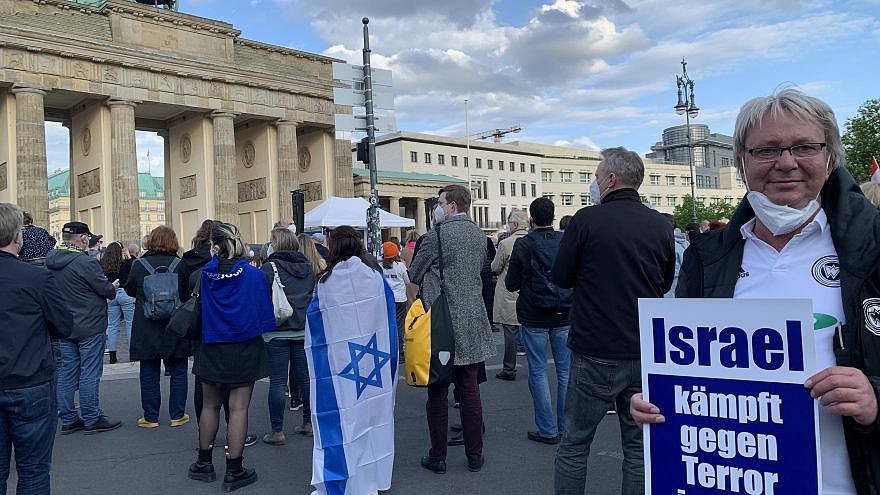 (May 25, 2021 / JNS) Just hours before Israel and Hamas announced a ceasefire on May 21, German politicians representing all political parties, except for the excluded right-wing Alternative for Germany (AfD), gathered in front of the iconic Brandenburg Gate—yards away from Berlin’s Holocaust Memorial—to pledge its unwavering support for Israel. The rally, which drew by larger estimates about 1,000 people, was organized by the WerteInitiative (“ValuesInitiative”), a Jewish NGO that aims to secure Jewish life in Germany, and co-sponsored by several Jewish and non-Jewish groups.

The rally was the pro-Jewish answer to the onslaught of anti-Israel and anti-Semitic demonstrations seen across Germany as Israel sought to stem Hamas’s rocket barrage over the course of 11 days. In several German cities, pro-Palestinians activists protested against Israel’s operation with anti-Semitic chants and actions unseen since the era of the Third Reich.

Rocks were thrown at synagogue windows throughout the country. On the previous Saturday in Berlin’s most Arab district, Neukolln, some 3,500 riled-up protesters disregarded coronavirus guidelines threw bottles and stones at police, injuring about 90 officers. They burned Israeli flags, called for the bombing of Tel Aviv and chanted “Israel child-murderer.”

“The terrorism against Israel is a crime and the anti-Semitic demonstrations and attacks are a disgrace to our land,” said Justice Minister Christine Lambrecht (CDU) to the masked, socially distancing crowd holding Israeli flags and pro-Israel signage. Local pro-Israel Kurds also waved the Kurdish flag in solidarity.

‘They have to show they’re a bit stronger’

Standing in front of an Israeli and German flag, all speakers, including from the far-left Die Linke, shared similar sentiments.

Some attendees were surprised by such strong pro-Israel rhetoric, largely unheard from the German political class during the 2014 Gaza-Israel conflict.

“We’ve lived here for almost 41 years, and it’s the first time they’re standing uncompromisingly with Israel, and we wonder why. Why now? What’s the source?” said Marihyama Schnargon, among Germany’s estimated 100,000 Jews who hail originally from the former Soviet Union. She noticed how, this time, politicians and mainstream media outlets uncharacteristically laid blame on Hamas for starting the conflict.

“The government and police feel powerful to the critical mass,” she said, surmising the motivations. “So they have to show they’re a bit stronger.”

Yuval Assif, an Israeli participant who came with his family as “the least we can do,” also noticed the radicalization of the German street. Days ago, he closely eyed two Arabic-looking men donning keffiyehs coming out of a central subway station. “They looked at me and said, ‘What’s your problem?’ ” As Assif sensed they were about to pick a fight, he rode off with is bike.

He said he was pleased with the pro-Israel display: “I think Germany shows support for Israel. Under the circumstances and in general, I would say: yes.”

One German-born member of the Jewish community (who asked not to be named) expressed dismay at the relatively small turnout, particularly of non-Jews. Most attendees were members of Berlin’s Jewish community, some of whom took the rally as an opportunity to socialize amid the city’s current coronavirus restrictions. 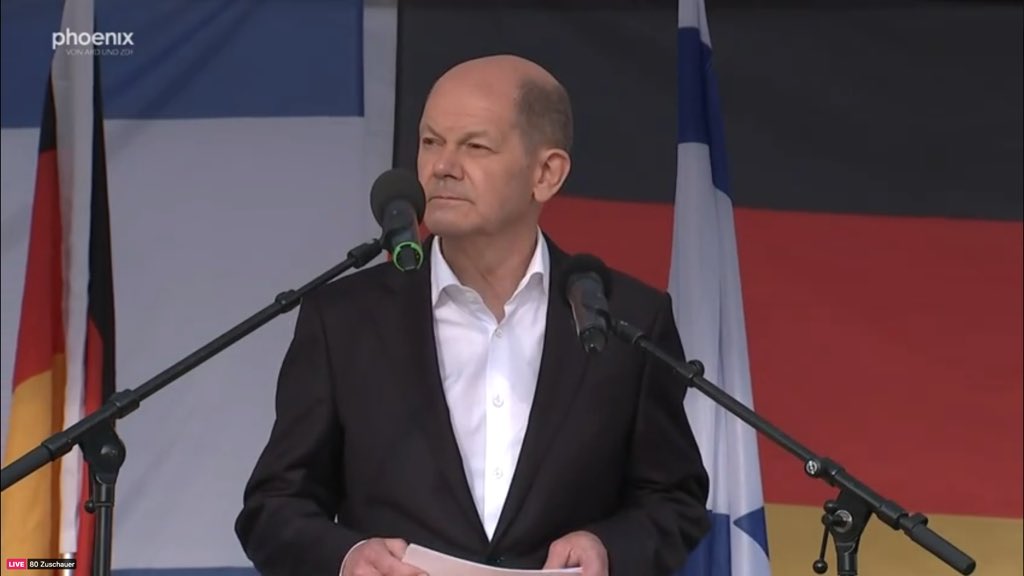 “Palestinian demonstrations are raging and packed” with people, he said, noting the contrast.  He pointed to the empty expanse of the boulevard leading to the police barricade set against Berlin’s Victory Column landmark.

He added that he’s not convinced that the German political heart is truly pro-Israel, though “for the foreseeable future, you won’t see mainstream German society go against Israel.”

Elio Adler, head of the WerteInitiative and a dentist by profession, attributed the relatively low turnout in part to its last-minute production. He was pleased at the readiness of the spectrum of German parliamentarians to participate and express solidarity.

“People saw how the so-called pro-Palestinians demonstrations are not ‘pro-Palestinian,’ but anti-Israel, and not only ‘anti-Israel’ but Jew-hating—and verbalizing their attitudes in an absolutely unacceptable, aggressive, violent manner,” he said. “I think the Germans are fed up with pogrom atmospheres in public.”

He said he and his team will follow up with German lawmakers and ensure that their words are more than pre-election campaigning, particularly regarding areas he flagged in his opening remarks: Germany’s unconditional funding of the U.N. Relief and Works Agency for Palestinian Refugees (UNRWA), which also serves to incite Palestinian anti-Semitism and violence; Germany’s diplomatic appeasement of the anti-Semitic Iranian regime; Germany’s anti-Israel voting patterns in the United Nations; and the domestic protection of Jews.

Several participants doubted the lawmakers’ sincerity, including Uwe Schmitt, president of a local soccer club, who came to show support for the only democracy in the region. “They do nothing, just talk,” he said. He believes that the German government has done little to integrate and re-educate youngsters who grow up in anti-Semitic households. He does his share to break down anti-Semitic stereotypes by bringing together Jewish, German, Arab and Turkish children for soccer activities. “War is based on ignorance,” he emphasized.

Marcel Goldhammer, a German-Israeli running on AfD’s ticket for the German parliament representing the Neukolln district, said he was extremely insulted that the AfD wasn’t invited. “The AfD is the most pro-Israel party in the German parliament,” he said, citing legislation that it introduced to ban BDS and Hezbollah.

German society at large—mainstream German-Jewry included—generally perceive AfD’s pro-Israel stance as an inverse of their hatred for Muslims. Some AfD party leaders had made statements interpreted to minimize the travesty of the Holocaust. Nevertheless, the AfD hosts a controversial Jewish faction that sees the new party as the most effective Jewish protectorate. 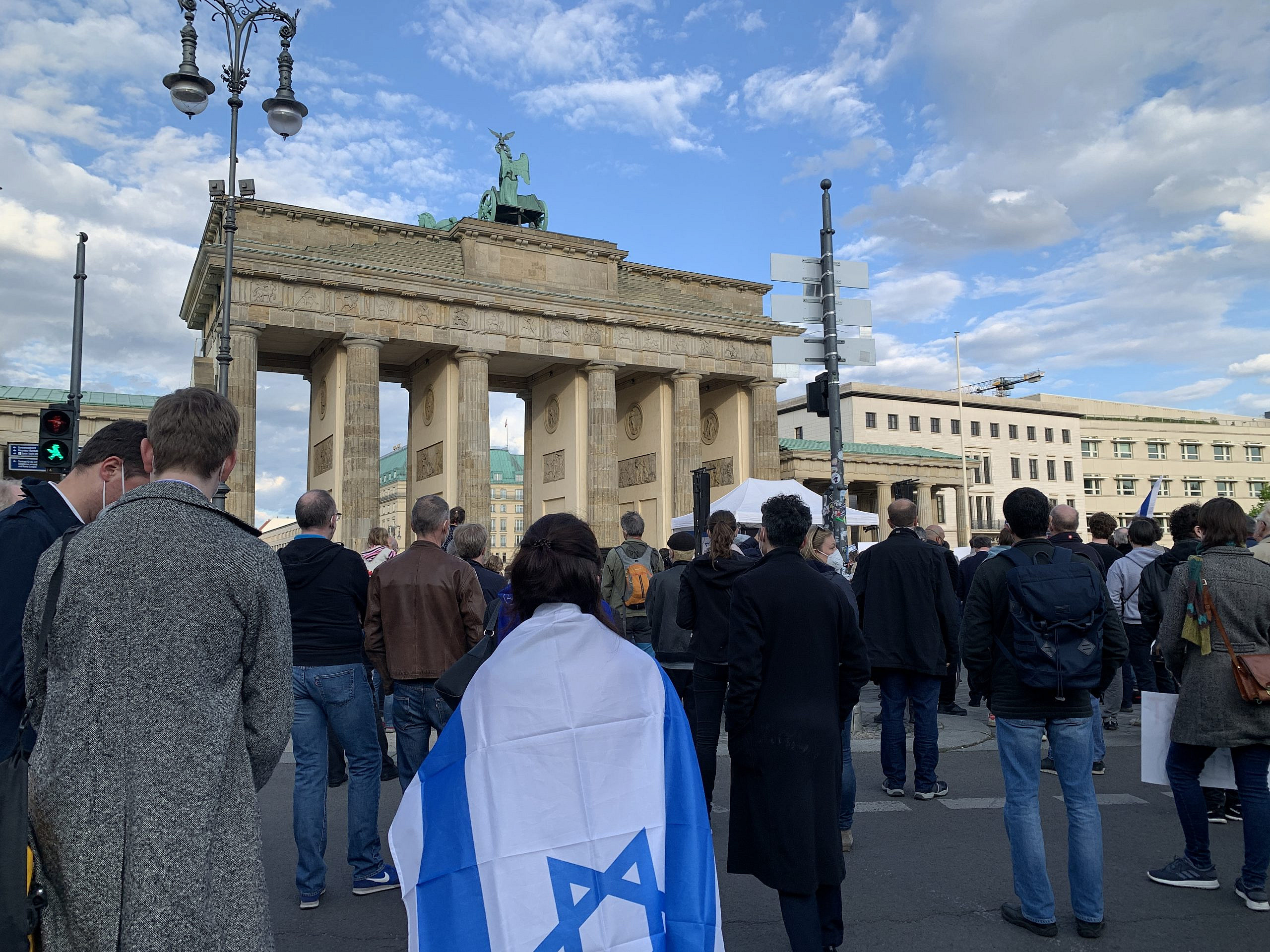 “It’s absolutely bogus that these ‘old party people’ send millions, billions of so-called foreign aid to Palestinians, and they use it to buy weapons and build terror tunnels and to fund martyr pensions,” stated Goldhammer.

Broder is a well-known critic of Merkel’s immigration policy in large part for its importation of Muslim anti-Semitism, as well as of the Jewish community’s perceived appeasement of the German political elite.

He called the rally a “symbolic act,” and said that if the organizers and participants were serious about standing up to Jew-hatred, they should have spoken at the same street where the anti-Semitic riots took place days before.