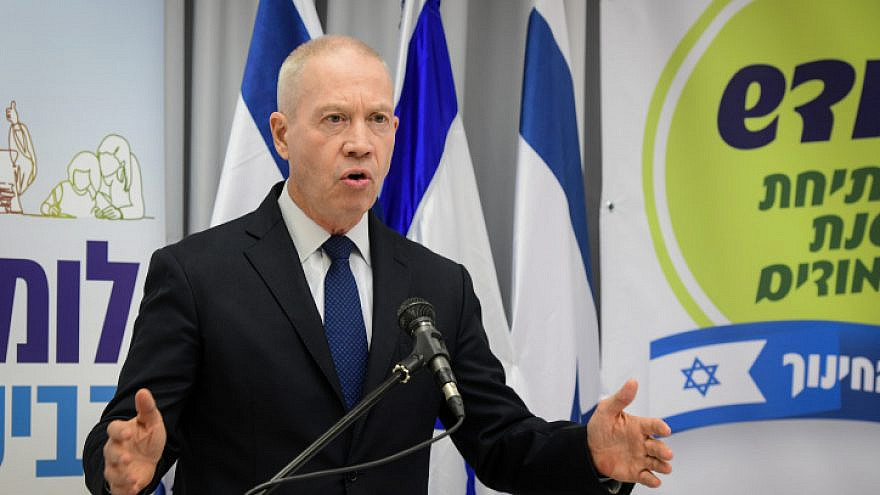 (January 22, 2021 / JNS) Earlier this month, Israel’s education minister moved to ban B’Tselem from lecturing in Israeli schools after the self-described human-rights group accused the government of being an “apartheid regime.”

“The Ministry of Education under my leadership engraved on its banner the promotion of Zionist, Jewish and democratic values, and it acts accordingly,” said Education Minister Yoav Galant. “We will not allow organizations that call the State of Israel an ‘apartheid state’ to lecture to students about to be drafted into the Israel Defense Forces.”

The unprecedented move by Galant to bar B’Tselem has prompted further calls for an expansion of a law not to permit anti-Israel organizations from entering schools.

The move by Galant came after a new report from B’Tselem accused the Israeli government of being an “apartheid regime.” This is the first time that the left-wing organization, which supports the BDS movement against Israel, has used the heavily loaded term.

“It is one regime between the Jordan River and the Mediterranean Sea, and we must look at the full picture and see it for what it is: apartheid,” the group’s executive director, Hagai El-Ad, said in a statement.

The B’Tselem report also went further in its accusations against the Israeli government, saying that Israeli Arabs “do not enjoy the same rights as Jewish citizens by either law or practice.”

Additionally, the report clouds the differences between Israeli Arabs and Palestinians, lumping all into the “Palestinian” category.

More than 20 percent of Israel’s population is Arab, including Druze and Christians, who enjoy the same rights as Jewish citizens. Palestinians are Arabs who do not live in sovereign Israel and are governed by the Palestinian Authority, not Israel.

According to Matan Peleg, CEO of Im Tirtzu—a right-wing organization in Israel focused on strengthening Zionism—“although profiting from the promotion of blood libels against the Jewish people is one of the world’s oldest professions, it doesn’t mean that we need to adopt it.”

Peleg told JNS Galant “did well” by ordering schools to deny a platform to an organization that “profits from slandering Israel and promoting international pressure against it.” He said he calls on Galant to “expand the ‘Breaking the Silence Law’ so that anti-Israel propaganda organizations will not be permitted to enter schools.”

The bill, passed in July 2018, aimed to prevent lectures and activities at schools organized by left-wing groups arguing for legal action to be taken against Israel’s IDF for so-called “crimes” against Palestinians. It also stipulated that the law should apply to those, such as B’Tselem, promoting political proceedings against Israel and expressing support for economic sanctions against Israel.

Amit Gilutz, a spokesperson for B’Tselem, told JNS that Galant may have ordered schools to ban groups like B’Tselem because he is against “lies,” and for a “Jewish and democratic” Israel.

“But it is Galant who is lying,” he insisted.

According to Gilutz, Israel “cannot be considered a democracy, for it works to advance and perpetuate the supremacy of one group of people, Jews, over another, Palestinians, within a single, binational polity. This is Israel’s apartheid regime. No one can censor reality.”

Adalah, an Arab legal group, said it has appealed to Israel’s attorney general to cancel the order by Galant, saying that it was made without proper legal authority and intended to “silence legitimate voices.”

‘A big lie unconnected to truth’

Eugene Kontorovich, director of international law at the Jerusalem-based Kohelet Policy Forum, a conservative think tank, said the apartheid accusation “is not just totally false, it is anti-Semitic.”

Israel “has no policies of racial or ethnic separation,” he said.

B’Tselem’s accusation, he told JNS, “is classic anti-Semitism: a big lie unconnected to truth that resonates with contemporary concerns—in this case about racial justice, and whose repetition will nonetheless convince some that it must be at least somewhat true.”

Kontorovich noted the absurdity of B’Tselem’s report, pointing out that “some policies do resemble apartheid rules—in particular, the Palestinian Authority’s prohibition, with severe penalties, of selling any real estate to Jews. Ironically, the closest thing in the region to an apartheid policy is not mentioned at all.”

Kontorovich also noted that “unlike non-white South Africans, the Palestinians have been offered full international statehood by Israel in numerous times and have turned it down as many times. … Indeed, the Palestinian ability to reject full statehood offers shows that the conditions under which they live cannot be compared to apartheid.”

The B’Tselem report blamed Israel’s government for pushing right-wing “apartheid” policies, such as Israel’s nation-state law, which specifies the State of Israel as the nation-state of the Jewish people.

“Indeed, it is almost entirely declarative,” he said, adding that “B’Tselem’s report is dishonest in almost all its particulars and designed simply to attach to Israel in the public mind a vicious smear: classic anti-Semitism.”