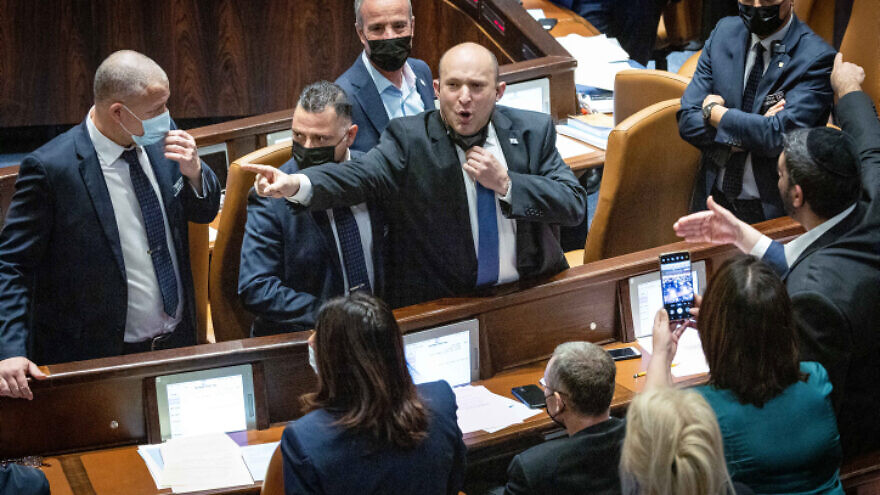 Israeli prime minister Naftali Bennett reacts during a discussion on the Electricity Law connecting to Arab and Bedouin towns, during a plenum session in the assembly hall of the Israeli parliament in Jerusalem, January 5, 2022. Photo by Yonatan Sindel/Flash90
Republish this article
865 WORDS
Spread the word.
Help JNS grow!
Share now:

(January 6, 2022 / JNS) Israel’s Knesset on Wednesday passed the controversial “electricity bill,” which now enables the state to connect tens of thousands of illegally built Arab homes to the national grid.

The bill, first proposed by the coalition’s Islamist Ra’am Party, has been a source of friction between Prime Minister Naftali Bennett’s governing coalition and the opposition—led by former Prime Minister Benjamin Netanyahu of the Likud Party—potentially allows more than 130,000 Arab Israelis living on land defined as “agricultural” rather than “residential” to receive electricity, water and phone lines, passed by a single-vote majority (61-0) in the 120-seat parliament after the opposition boycotted the vote.

Detractors fear that the law with further enable illegal Arab building on vast swaths of land and contributes to the culture of lawlessness that has become so widespread, especially in Bedouin communities in Israel’s south. However, supporters contend that the legislation will address outdated zoning laws in Arab communities that had been neglected for decades, which led to buildings being constructed without proper permits and improvised electrical hookups that posed a serious safety hazard.

Additional problems arose when the Knesset allowed the government to bypass a lengthy debate on the subject and moved the bill up for a quick vote. Critics decried it as undemocratic.

At the same time, ahead of the pre-vote debate, an amendment was introduced that would have enabled outposts in Judea and Samaria—more commonly known as the West Bank—to be connected to the national grid as well, but Bennett rejected it. Netanyahu and right-wing members of the opposition, who had decided to boycott the vote, then heckled Bennett over his decision.

Hillel Frisch, a professor of political studies and Middle East studies at Bar-Ilan University and an expert on the Arab world at the Jerusalem Institute for Strategy and Security, told JNS “what probably incenses the Israeli right the most is the use of law to dismantle tiny settlements on isolated hilltops in the name of preserving state law and now through the electricity law, to accept with equanimity, the illegal land grabs of tens of thousands of Arab citizens by providing these illegal villages (many the size of towns) with electricity.”

Further infuriating many people is the government’s current efforts to destroy the Jewish community of Homesh in northern Samaria, claiming that it is built illegally. At the same time, Khan al-Ahmar, an illegal Bedouin outpost situated near Jerusalem and funded by foreign governments, has yet to be demolished.

This double standard is just one example of many that infuriates Israel’s right-wing, as well as many Jews in the Diaspora.

‘An upside world where lawbreakers are given rights’

Naomi Kahn, director of Regavim’s international division, slammed the law for essentially approving illegal construction and for being “discriminatory,” as it is intended specifically for Arabs.

She explained to JNS, “Up until now, the only tool which the State of Israel had to encourage people not to build illegally and to get permits for their structures was to say that any structure that doesn’t have a building permit can’t be hooked up to electricity.”

The new law allows for anyone to build illegally and expect to receive a permit regardless of the fact that they broke the law.

Khan added that Regavim had several provisions put into the law to limit its damage, including a provision not allowing electricity for structures that have a demolition order against them.

Gush Etzion Regional Council Head Shlomo Ne’eman also reacted to the bill’s passing, saying “this is a terrible day in which a horrible anti-Zionist law was passed, giving preference to Bedouin law-breakers who try to undermine the Jewish state at the expense of young Jewish pioneers who are heroically fighting the state’s battle over the protection of its lands.”

Ne’eman added: “I call upon our Zionist friends in the Knesset to come to their senses and correct this injustice by instead supporting the true pioneers who are working on behalf and for the benefit of the state.”

According to Frisch, Israel has offered most of the owners of the illegal structures in question “plots free of charge in organized towns in their immediate area and subsidizing in full the basic infrastructure, including electricity, modern sewage, paved roads and generous grants to the municipalities to service them; in short, all the amenities they claim the state denies them.”

He explained that because of the prohibitive costs of public services to citizens in sprawled-out areas, “the social, educational and economic gaps between the families of these land-grabbers and the majority of Israel’s citizenry will remain as long as these citizens do not make the move to the planned towns.”

“The electricity law might solve the electricity problem,” said Frisch, “but its long-term pernicious effects on the welfare of these citizens in delaying this necessary move far outweigh the short-term benefit.”