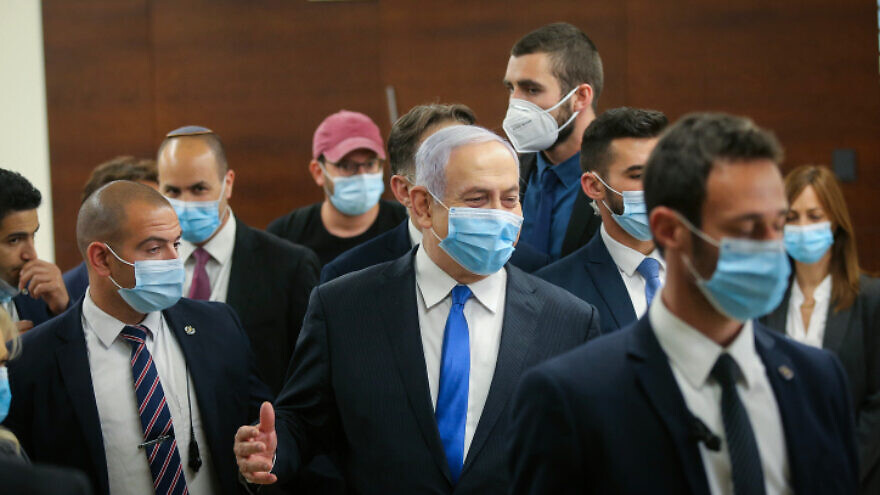 Israeli Prime Minister Benjamin Netanyahu at the Knesset in Jerusalem after presenting the country's 35th government, on May 17, 2020. Photo by Alex Kolomoisky/POOL.
Spread the word.
Help JNS grow!
Share now:

(May 17, 2020 / JNS) Israel’s new government was sworn in on Sunday, bringing an end to more than a year of political stalemate and preventing a fourth round of elections.

According to the terms of the coalition deal reached last month, Israeli Prime Minister Benjamin Netanyahu will continue to serve as premier for 18 months. Blue and White head Benny Gantz will serve as vice premier during that time, after which he will take over as prime minister for the next 18 months, while Netanyahu becomes vice premier.

“The people wanted unity, and that is what it got,” Netanyahu told the Knesset, according to Reuters. Netanyahu has been prime minister since 2009 and is facing a corruption trial, slated to begin next week.

The new government—the largest in Israeli history, with 36 ministers—is planning to annex the Jordan Valley and Jewish settlements in Judea and Samaria starting in July, under the aegis of the U.S. “Peace to Prosperity” plan, aka the “deal of the century.”

Subscribe to The JNS Daily Syndicate
by email and never miss
our top stories
“This is an important day for the State of Israel,” Netanyahu said on Sunday, according to Ynet. “The new government was established according to the will of most citizens and will serve all citizens.”
“If we had gone into a fourth election, the additional cost would have amounted to NIS 2 billion. The additional cost of a unity government [was roughly] NIS 85 million a year, infinitely lower than the cost of additional elections,” he said, according to the report. “That would have been a real waste. It would have forced us to defer the fallout of the coronavirus to an undetermined date.”
Gantz’s erstwhile Blue and White colleague Yesh Atid leader Yair Lapid criticized the new government, calling it a “corrupt celebration.”

“The coronavirus crisis is an excuse to hold a corrupt celebration at the taxpayers’ expense. You are establishing the biggest and most wasteful government in Israeli history,” said Lapid, according to Reuters.