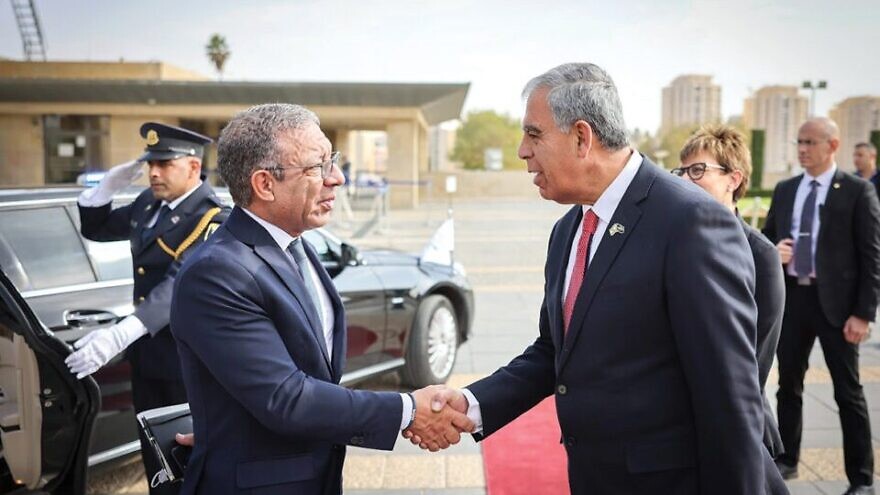 Pacheco was greeted by Knesset Speaker Mickey Levy in a formal ceremony. His arrival marks the first time since 2020 that trumpets have been sounded in the Knesset, an honor reserved for heads of state or parliaments.

Pacheco has served in Portugal’s parliament since 1991. In 2002 he began representing Portugal in the IPU, and in the 19 years since has served in a number of roles in the organization. Last year, he was elected president of the IPU, which is headquartered in Geneva and also maintains offices near the UN, as an observer organization.

The IPU was founded to serve as a forum to foster dialogue between members of various parliaments, to promote goals of peace and cooperation between peoples, as well as representative democracy. IPU assemblies discuss political issues and international challenges. A special IPU committee devoted to the Middle East has permanent representation in the Knesset.

The IPU sometimes issues statements and passes resolutions condemning Israel and its policies. One such example was a condemnation of Israel’s announcement of its intention to relocate the US Embassy to Jerusalem. The IPU has also called on Israel to release arch-terrorist Marwan Barghouti from prison and condemned the government for arresting MKs with ties to the Popular Front for the Liberation of Palestinian (PFLP).

However, the IPU delegation to the Knesset has more than once managed to stop anti-Israel discourse and resolutions, particularly pertaining to the Israeli-Palestinian conflict.

Q: After your visit to Israel, you are going to visit the Palestinian Authority. Will the visit there be the same?

A: The Palestinian Authority is a member of the organization [IPU], so the IPU has a relationship with it. My visit to the Middle East has one clear goal: to encourage dialogue between the two sides and find a solution to a conflict that has already brought much suffering.

Q: What is the IPU’s policy on anti-Israel condemnations?

A: The organization respects democracy, and therefore decisions that condemn Israel. I regret that there are such condemnations against Israel, because I don’t believe that they contribute to a spirit of dialogue.

Q: In the shadow of the U.N., how much power does the IPU have?

A: We are a long-established organization, with over 130 years of history. The organization has been awarded two Nobel Peace Prizes for its work promoting dialogue as a way of resolving conflicts. At the United Nations, member nations present the policies of their governments. At the IPU, states are represented by parliaments, usually parliaments with many parties. Thus, we offer true representation that is closer to the concerns of [those countries’] populations.

Levy called Pacheco a “true friend to Israel” and thanked him for his support.