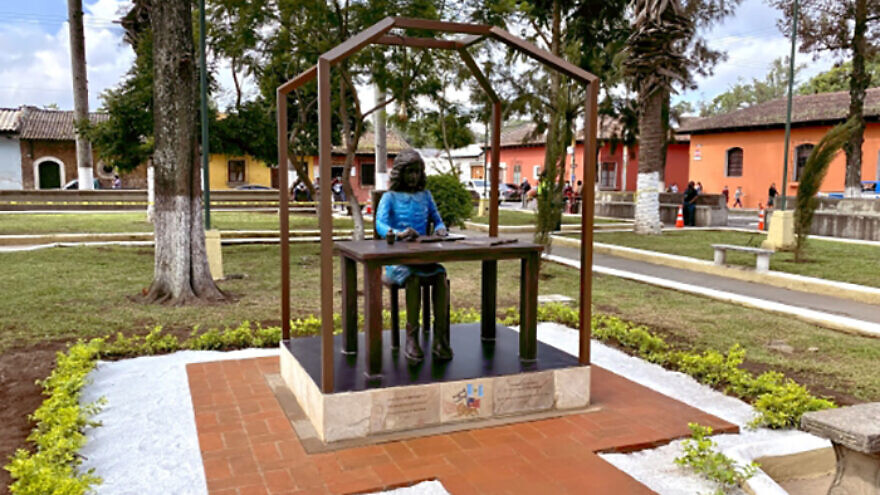 The Anne Frank Children’s Human Rights Memorial, which was dedicated on Sept. 3, rests in the San Sebastian Park across the street from the National School for Girls No. 2, Antonio Castro y Escobar. Saint Sebastian was murdered as a youngster by the Romans for being Christian.

The site for the statute was chosen by Antigua Mayor Victor Hugo del Pozo.

After a year-long delay due to the coronavirus pandemic, the bronze statue was delivered to the Jewish community of Guatemala two months ago. It was created by Jerusalem-based sculptor Sam Philipe and was funded by the Jewish American Society for Historic Preservation (JASHP).

One stone panel of the sculpture holds a quote from Frank’s famous diary that was found by her father, the only member of his family to survive the Holocaust. It says: “In spite of everything, I still believe that people are really good at heart.”

The second panel states that of the 6 million Jews who died in the Holocaust, 1.5 million were children, and “Anne Frank was one of them.” The third stone panel says: “Children are the ultimate victims of adult hatred, bigotry and ignorance.”

The statue’s dedication ceremony was attended by ambassadors from Israel and Colombia, Guatemalan congressmen, a representative for Hugo, community members and others. It ended with a shofar being blown by the rabbi of the Jewish community of Guatemala.

Guatemala has the only Holocaust museum in Central America.