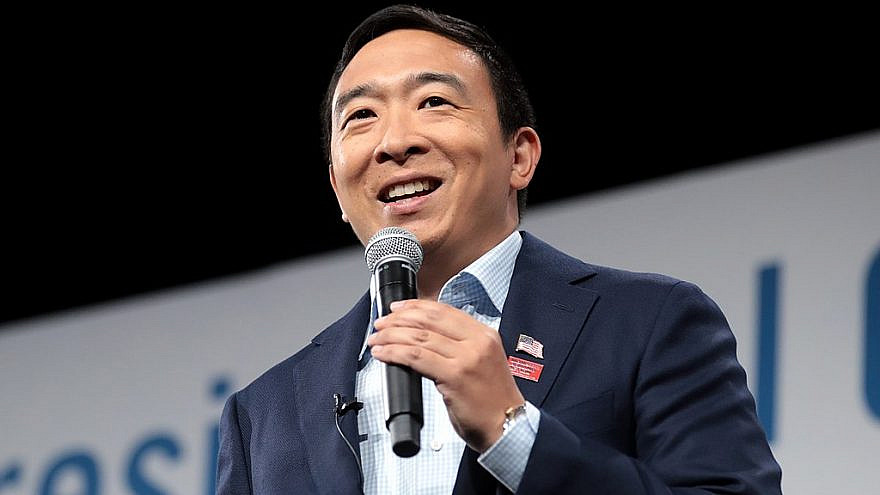 (March 22, 2021 / JNS) New York City mayoral candidate Andrew Yang said in a statement on March 19 that although he doesn’t believe the BDS movement is violent, it is anti-Semitic.

Yang told The Forward in a statement, “BDS does not recognize the right of Israel to exist. Not recognizing Israel’s right to exist is anti-Semitic. I strongly oppose BDS, as I’ve said countless times.”

The Forward asked Yang to clarify his stance on the BDS movement following conflicting remarks he made at a forum on March 18 that was hosted by Emgage, a Muslim-American advocacy organization.

During the event, Palestinian-American moderator Dean Obeidallah told Yang that when the mayoral candidate wrote in an op-ed for The Forward in January that BDS harkens “back to fascist boycotts of Jewish businesses,” it “caused a lot of pain in [the Palestinian] community.” Obeidallah told Yang that his grandmother’s “land has been taken by Israeli settlers and turned into a settlement.”

Yang responded: “I’ve spoken to people who have made a different argument, along the lines of what you just expressed, which is that BDS is nonviolent. I don’t think targeting Israel in this way is the right approach, but I certainly appreciate people who are standing up for what they believe in.”

He acknowledged to The Forward that he “used a poor choice of words on BDS” at the forum, “and it has caused pain to many people.” He added that he will reach out to Jewish leaders “to make sure they know what’s in my heart.”

Yang said at an event on Feb. 24: “My view on BDS is that because of its failure to disavow certain organizations that have expressed violent intentions toward Israel that I disagree with it, but I have complete respect for people who have a very different point of view.”