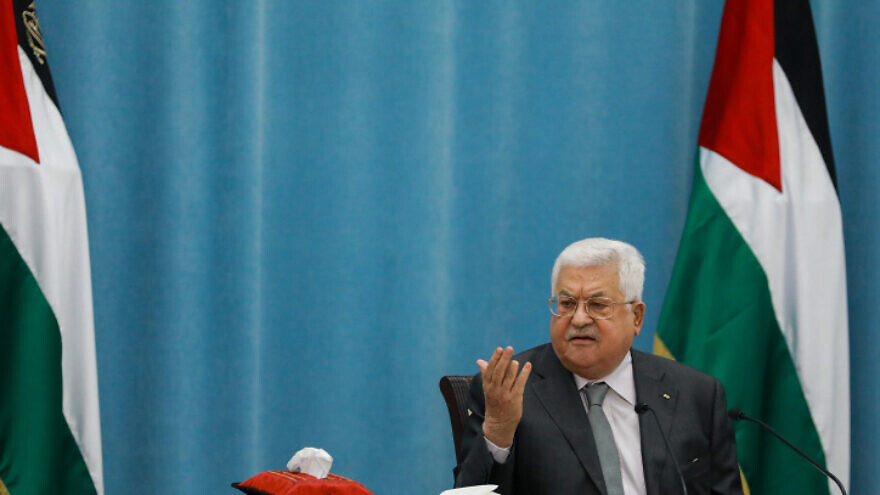 (May 27, 2020 / JNS) The Palestinian Authority’s security forces have ceased taking calls from the Israel Defense Forces and are not conducting security coordination with Israel, Israel’s Channel 11 reported on Monday, citing a senior Israeli defense source.

The development comes days after P.A. chief Mahmoud Abbas declared that he is no longer obligated to uphold previous agreements with Israel, including security coordination, in response to declared intentions by Israeli Prime Minister Benjamin Netanyahu to apply Israeli sovereignty in sections of Judea and Samaria.

“We’ve never been in a situation like this. There are no calls,” the source told Channel 11. “But the Palestinians know well, like we do, that they can’t live without us. The question is, how do they climb down from this tree?”

Col. (res.) Moshe Elad, one of the founders of the security coordination between the Israel Defense Forces and the Palestinian Authority, told JNS on Monday that in the event that the P.A. continues with its cessation of contacts with Israel into the long-term future, it would place itself in existential danger.

“The P.A.’s security forces conduct many arrests of Hamas operatives,” said Elad, a lecturer at the Western Galilee College. “Last year, they shut down 300 organizations that had affiliations to Hamas, Palestinian Islamic Jihad, other Islamists or ISIS. The P.A. closes down such organizations and institutions. Will they continue doing this? It’s a given that they will,” he said.

“If the P.A. fails to do this and gives breathing space to the Islamist organizations, the Islamists will fill that vacuum very quickly,” he added.

Does it hand over the keys to Israel?

Israel and the P.A. have a common interest in repressing Hamas in the West Bank; the P.A. benefits greatly from Israel’s operations and intelligence capabilities used to prevent Hamas and PIJ from building an armed infrastructure.

“I believe that Abbas’s maneuver is more declarative. I don’t think he can keep this up over time because the P.A. has a strategic need for coordination with Israel. The chances the P.A. would be taking if they keep this up would be very big, including the risk of an armed coup against them. Hamas has a presence in the West Bank. Without Israel, it would grow stronger,” said Elad.

The directive is partly designed to deflect criticism from his Islamist rivals, assessed Elad, adding that within days, security coordination could quietly return to normal levels.

On the other hand, he cautioned, as long as the cut in contacts remains in place, risks grow, and the coming days will form a sensitive test. An escalation could occur if an Israeli citizen accidentally enters a Palestinian city and P.A. police do not act to safely return the citizen to the IDF, as has occurred on a regular basis in the past.

In addition, coordinating movements between P.A. forces and the IDF in Area B is a vital issue.

Area B, where many Palestinian villages sit, requires coordination, meaning that if the IDF enters villages in that area, it notifies the P.A.
P.A. forces must coordinate their movements with the IDF, and they enter Palestinian police stations to avoid unintended friction, including the risk of an exchange of fire.

Should that coordination fail to happen and the IDF runs into the P.A., the potential for escalation exists, noted Elad.

Additionally, the coordination is crucial to smoothing over nightly IDF counter-terrorism arrest operations, which occur throughout the disputed territories.

Looking ahead, Elad said that the current move by Abbas could be a mere introduction to a much larger crisis with the P.A. in the event that Israel chooses to apply sovereignty to parts of Judea and Samaria, and the Jordan Valley.

Should Israel apply sovereignty in broad areas, “Abbas would have to take a strategic decision: Does the P.A. continue to function, or does it hand over the keys to Israel and tell it to look after 2.5 million Palestinians?” posed Elad. A more minimal application of Israeli sovereignty could mean that Abbas, or his successor, might try to keep the P.A. intact and work with Israel.

Elad noted that the P.A. does not enjoy full support in the West Bank, saying, “it’s not all Abbas’s territory. There are places that he cannot go to. Abbas’s successor, who is not known, could have even bigger challenges. This is a Palestinian generation that is decreasing its adherence to its leadership.”