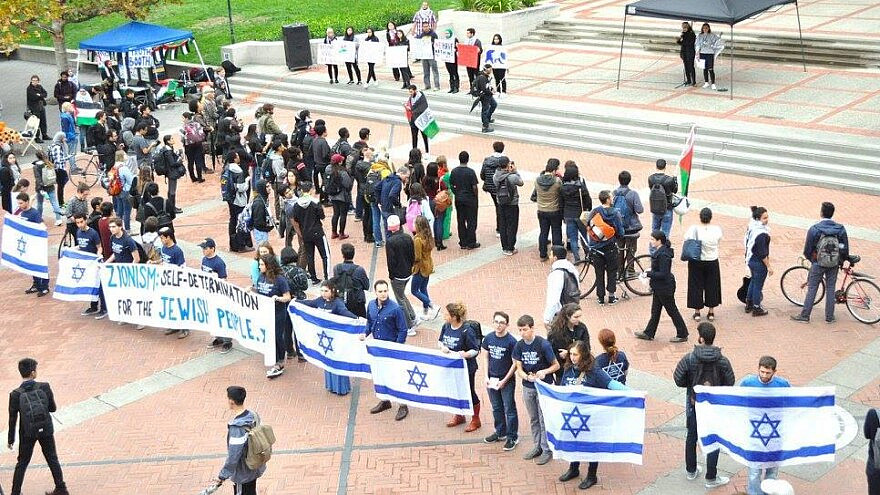 Students with UC Berkeley’s “Bears for Israel” hold a counter-demonstration at a Students for Justice in Palestine rally in the fall of 2018. Source: “Bears for Israel” via Facebook.
Republish this article
1050 WORDS
Spread the word.
Help JNS grow!
Share now:

(August 31, 2022 / JNS) The organization at the heart of a BDS controversy at the University of California, Berkeley, School of Law responded on Monday to condemnation from the law school’s dean and Jewish organizations in a statement posted to its Instagram account.

Berkeley Law Students for Justice in Palestine (LSJP) defended its attempt to get other law school student organizations to adopt an anti-Israel bylaw.

“The State of Israel is an apartheid state. It was established—just like the United States—through the genocide and displacement of indigenous people,” the group wrote, citing a controversial report on Israel published by Amnesty International earlier this year.

The controversy began on Aug. 21 when the Berkeley LSJP posted on its Instagram page that it had convinced eight other law student organizations to vote to change their organizations’ bylaws to add a pre-written pro-Palestinian bylaw.

The bylaw promises to divest all funds from institutions and companies “complicit in the occupation of Palestine,” ban future funding of such companies and institutions and prevent speakers who have expressed or hold views in support of Zionism from being invited to campus. The measure stated that the purpose of the proposed divestment and censorship was “protecting the safety and welfare of Palestinian students on campus.”

The law school’s Dean Erwin Chemerinsky sent a letter to leaders of law student organizations calling out the anti-Semitism in the bylaw.

“It is troubling to broadly exclude a particular viewpoint from being expressed,” he wrote on Thursday in a statement shared with JNS. “Indeed, taken literally, this would mean that I could not be invited to speak because I support the existence of Israel, though I condemn many of its policies.”

Chemerinsky’s concern for students’ First Amendment rights was not shared by LSJP students in their response.

“Free speech and the exchange of ideas cannot be romanticized when the byproduct of such rhetoric causes harm to marginalized communities,” LSJP wrote. “The action of affinity groups to exercise democracy and choosing not to platform Zionists, who are either active or complicit in causing harm to Palestinians, from being platformed in their spaces is absolutely a tenable action.”

LSJP also complained that instead of being lauded for their stand against Israel, they were being demonized.

“Instead of receiving support for our fearless activism against a state that is murdering, disabling and displacing Palestinian families day and night, a letter was sent to student leaders which caused confusion and, worst of all, lends its support to Zionist students who have been harassing pro-Palestinian Berkeley Law students,” they wrote.

Chemerinsky told JNS that the LSJP’s reply was predictable and repeated much of what the organization wrote in its original letter.

He replied by saying, “Thank you so much for sharing your views. I hope this can lead to a dialogue where all views are included.”

Chemerinsky said that he believes it’s important to distinguish between condemning Israel’s policies, condemning the existence of Israel and condemning Jews.

“I don’t think condemning Israel’s policies is the same as being anti-Semitic because I condemn a lot of Israel’s human rights policies,” Chemerinsky, who also called himself a Zionist, said. “I also condemn Gaza sending rockets into Israel. But that doesn’t make me anti-Semitic. I do believe that the students in their rhetoric often don’t draw distinctions among that and that condemning the existence of Israel and speaking against Jews often get conflated.”

ADL CEO Jonathan Greenblatt thanked Chemerinsky, tweeting that Chemerinsky’s “commitment to free and open dialogue helps to encourage the productive exchange of ideas and viewpoints at the university.”

“The actions of Berkeley Law Students for Justice in Palestine are not only anti-Semitic at their core, but also hinder any sensible or legitimate discussions on campus about the Israeli-Palestinian conflict,” ADL San Francisco wrote on Twitter. “We thank Dean Chemerinsky and Berkeley Law for their commitment to ensuring freedom of dialogue, including the diverse views held by the university’s vibrant communities.”

Another organization, the Israel War Room, started an online petition to urge more UC Berkeley administrators to denounce the bylaw.

“By spreading conspiracies against Israel, the BDS movement has been weaponized as a means to ruin the livelihoods of Israeli civilians, both Jews and Arabs alike,” the organization wrote. “In reality, anyone who has traveled to Israel can attest to the country’s thriving diversity, equal rights and inclusivity. Thousands of Palestinians rely daily on their jobs in Israeli companies and startups to support their families. Israel also provides life-saving healthcare and opportunities unavailable to Palestinians under the abusive leadership of the Palestinian Authority.”

David Friedman, who served as U.S. ambassador to Israel under the Trump administration, tweeted a reminder that there could be negative consequences to the students’ actions once they enter the workforce.

“I guess I won’t be speaking at UC Berkeley Law School,” Friedman, a former Wall Street attorney, wrote. “But when these snowflakes head East looking for a job on Wall Street, I hope it is remembered how they squandered their education.”

In an op-ed published on Monday in J. The Jewish News of Northern California, Chemerinsky also denied that the few groups that adopted the bylaw reflected the climate for Jews on campus and said he feared that the media is using a minor incident to paint a misleading picture of the situation.

“I am in my sixth year at Berkeley, after nine years as dean of UC Irvine School of Law. As a Jewish man in my late 60s, I, unfortunately, have experienced anti-Semitism in my life and am sensitive to it, but I have seen little anti-Semitism among our faculty, staff and students at Berkeley Law or on the campus,” he wrote.