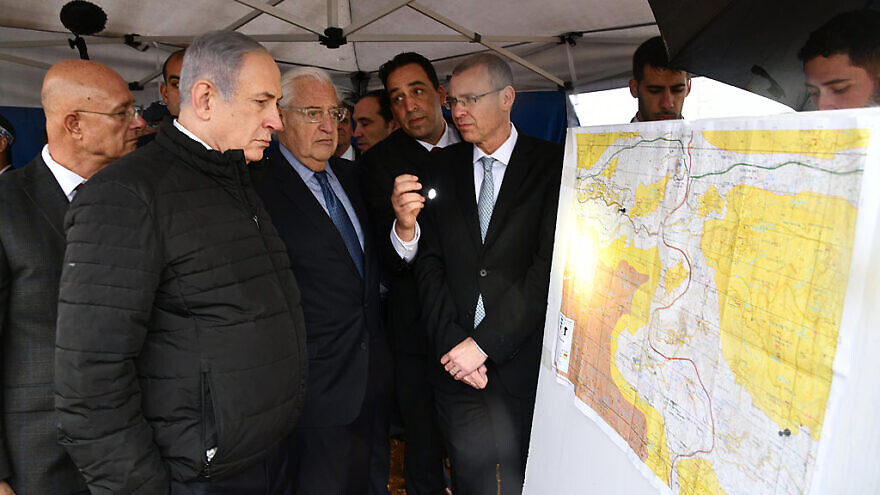 (June 21, 2020 / JNS) Senior U.S. administration officials will hold a meeting this week on whether or not to give the green light to the Israeli government to apply sovereignty in the Jordan Valley, and parts of Judea and Samaria, according to Israeli media reports.

According to Channel 13 diplomatic reporter Barak Ravid, U.S. Ambassador to Israel David Friedman will travel to Washington, D.C., and peace envoy Avi Berkowitz, who was supposed to travel to Israel this week, will join Secretary of State Mike Pompeo, senior adviser to and son-in-law of the president Jared Kushner, and National Security Advisor Richard O’Brien for the discussions.

Ravid, who claimed that his information came from sources within the Israeli and American administrations, said there are indications that U.S. President Donald Trump himself will take part in some of the deliberations.

The reports claim that the side pushing for a green light is led by Friedman, while those who have greater reservations are led by Pompeo.

Israeli Prime Minister Benjamin Netanyahu has said that as of July 1, the Israeli government will begin a process of applying Israeli sovereignty to parts of Judea and Samaria, in line with his party’s coalition agreement with Defense Minister Benny Gantz’s Blue and White Party. The details of how much of the territory will be placed under sovereignty and when this process will actually take place have yet to be provided.