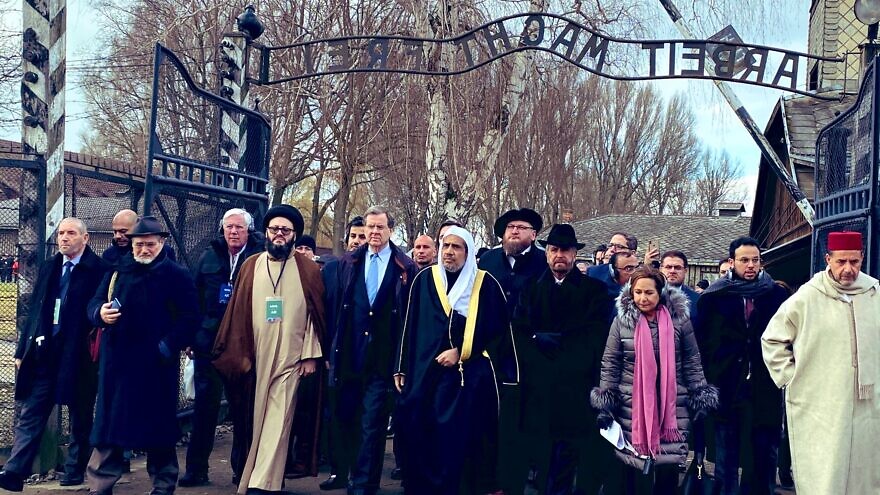 (January 24, 2020 / JNS) A senior Saudi religious leader led a delegation of Muslim leaders on a visit of the former Auschwitz-Birkenau concentration camp in Poland on Thursday timed to the 75th anniversary of its liberation.

Sheikh Mohammed al-Issa, secretary-general of the Muslim World League, is the most senior Islamic leader to visit the former death camp.

The visit was a key element in a historic memorandum of understanding that the Muslim World League and the American Jewish Committee (AJC) signed in April 2019 that “codifies the commitment of the two global institutions to further Muslim-Jewish understanding and cooperate against racism and extremism in all its forms,” according to the AJC.

Al-Issa said, “I believe that by paying my respects to the victims of Auschwitz, I will encourage Muslims and non-Muslims to embrace mutual respect, understanding and diversity.”

He added that “the heinous attacks in Pittsburgh, Pennsylvania, in Christchurch, New Zealand, and most recently, in Sri Lanka compel us all to unite and stand up against those who want to divide us.”

Al-Issa, a former justice minister, has held several senior positions in the religious and legal system in Saudi Arabia, and is considered a close associate of Crown Prince Muhammad bin Salman, according to Haaretz. In 2017, al-Issa visited the U.S. Holocaust Memorial Museum in Washington, D.C., and declared Holocaust denial a crime against Islam.

As part of the memorandum of understanding, al-Issa also accepted an invitation from AJC CEO David Harris to address the AJC Global Forum in Berlin in June 2020, and Harris will lead an AJC delegation to Saudi Arabia.