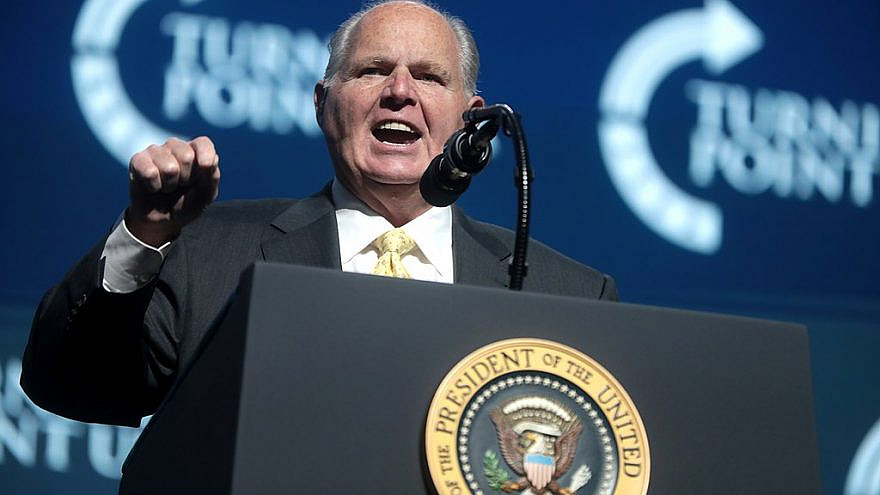 (February 19, 2021 / JNS) In spitfire fashion, Rush Limbaugh engaged millions of people daily for hours on his talk-radio show, which at the end of his career was broadcasted on more than 650 radio stations. The controversial figure, who made waves of his own throughout his career as a conservative political commentator and author, died of lung cancer on Feb. 16 at the age of 70.

It was seldom that Limbaugh spoke about Israel, keeping his ire, conspiracy theories and raging rants for the Democratic Party and anyone who disagreed with his conservative philosophies. Within the Jewish community, there was a great divide on how to view the divisive figure, who some called borderline anti-Semitic. Still, his often harsh rhetoric, even if it was part of his singular “brand,” could often be set aside because time and again, he stood up for America’s lone democratic ally in the Middle East in the face of its ever-looming enemies.

Indeed, while Limbaugh focused on domestic politics and U.S. culture wars, others credit him for being a large voice that mainstreamed support for Israel within the conservative movement, and especially, talk radio. This was especially true during Limbaugh’s early years on the airwaves in the 1980s and ’90s, when strong support for Israel was still not a given among Republicans. 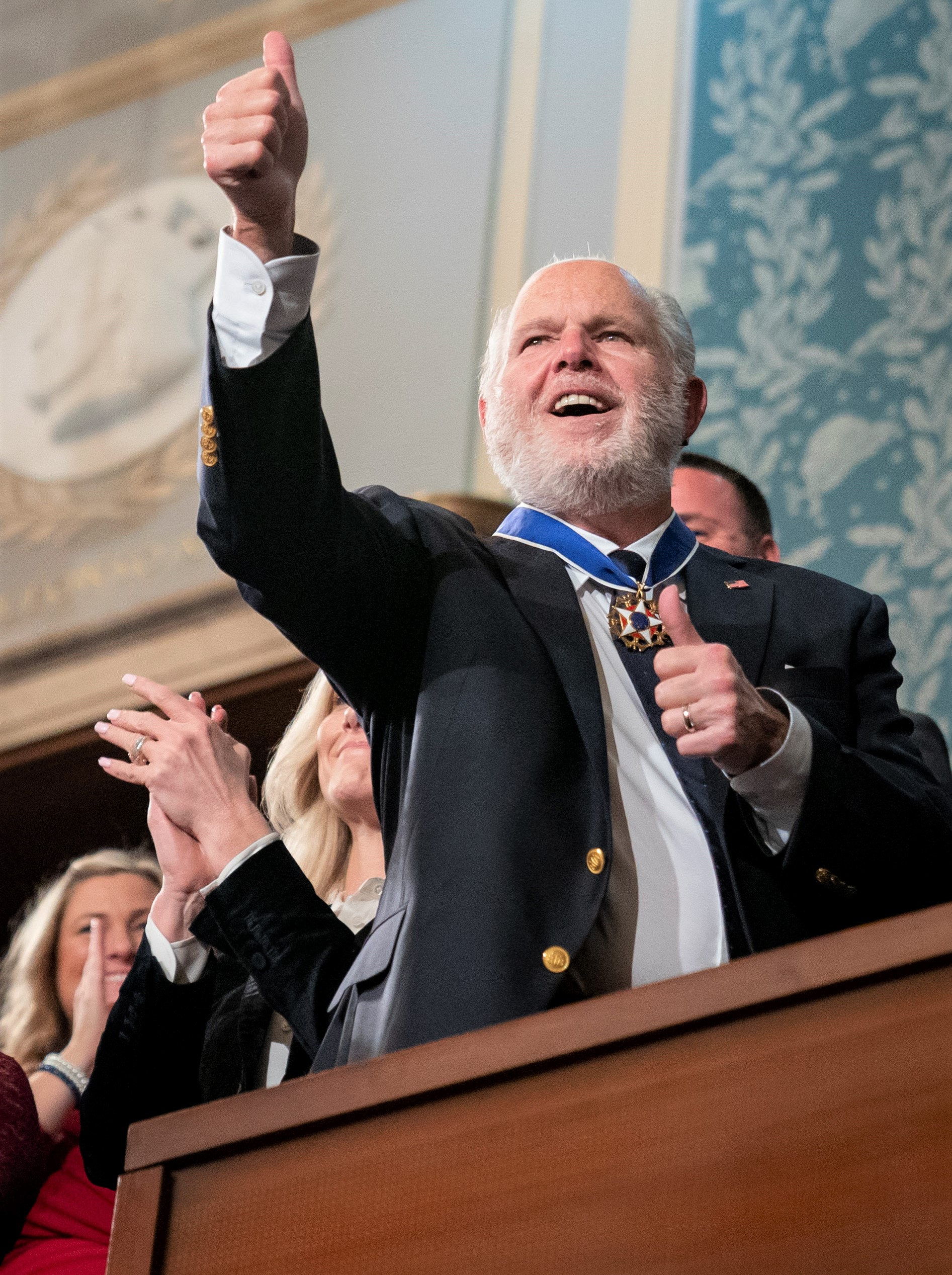 Conservative talk-radio host Rush Limbaugh gives a thumbs-up to U.S. President Donald Trump from the House Gallery after he was awarded the Medal of Freedom during the State of the Union address at the U.S. Capitol in Washington, D.C., on Feb. 4, 2020. Credit: Official White House Photo by D. Myles Cullen.

Still, Limbaugh faced controversy over comments regarding Jews, reflected in the fact most American Jews overwhelmingly vote Democrat and supported policies far to his left.

Coupled with that was Limbaugh’s mockery of political correctness, including comments over the years about feminism and the LGBTQ movement, making him public enemy No. 1 among liberal groups, with whom many American Jews are involved in and support.

‘He has been nothing short of a philo-Semite’

Most notable was a comment back in January 2010, when he said to some that “bankers” is a code for being Jewish. “And guess who Obama’s assaulting? He’s assaulting bankers. He’s assaulting money people. And a lot of those people on Wall Street are Jewish. So I wonder if there’s starting to be some buyer’s remorse there.”

Limbaugh was referring to the fact that most Jews voted for Obama in the 2008 elections and that perhaps now that he was going after Wall Street, they would regret backing him. It brought immediate condemnation from the Jewish community.

“Limbaugh’s references to Jews and money in a discussion of Massachusetts politics were offensive and inappropriate,” then-director of the Anti-Defamation League, Abe Foxman, said in a statement. “While the age-old stereotype about Jews and money has a long and sordid history, it also remains one of the main pillars of anti-Semitism and is widely accepted by many Americans.”

He ended that he hoped that once he learned how the statement was offensive, he would apologize. The talk-show host did nothing of the sort, claiming his words were taken out of context. He told his radio listeners two days after the incident, “Anybody who listens to this program even marginally knows that this program is and has consistently been one of the most outspoken supporters of the Jewish people and of Israel in particular. … You’re going to find nothing but love and respect and admiration for the Jewish people, and an unwavering support for Israel that has not ever shaken.”

In the Orthodox Jewish community, Limbaugh has become for many the one who shaped their political philosophy. In last week’s Mishpacha magazine, Binyamin L. Jolkovsky, editor of the conservative website Jewish World Review, wrote about how students of the Israeli yeshivah he was studying at would spend lunch breaks listening to Limbaugh. “During commercials, we would-be lamdanim [‘scholars’] applied our well-honed skills to ‘Rabbi Limbaugh’s’ discourses. In our search for truth, we tried to find flaws in his logic and arguments. We rarely succeeded.”

It was the Jewish Orthodox organizations that immediately backed up Limbaugh, stating that while one may agree or disagree with his views on many subjects, “his outspoken support for Israel has been eloquent, informed and undeniable. Moreover, in commentary on the Jewish people, he has been nothing short of a philo-Semite.” 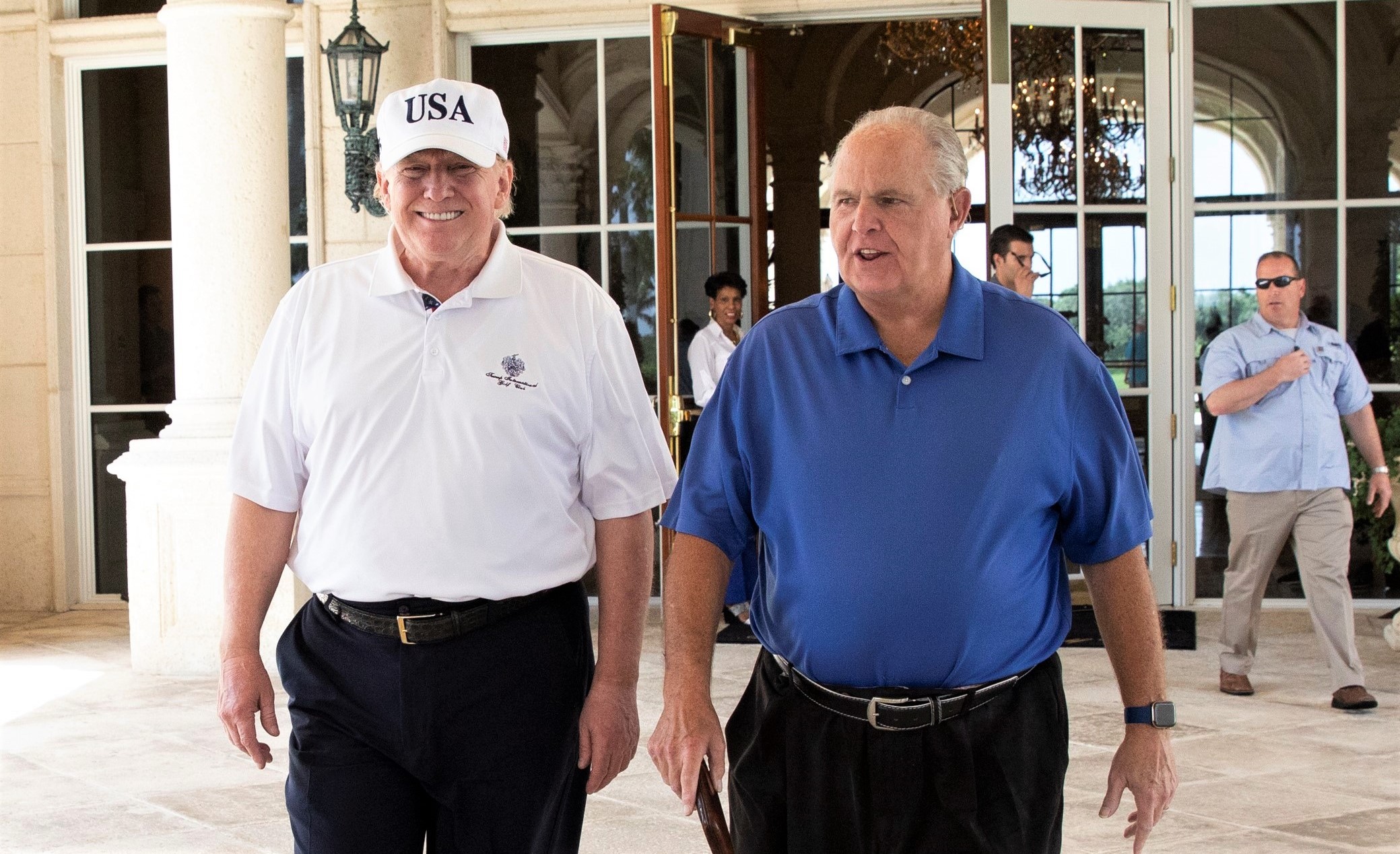 ‘The enemy could be so close to your heartland’

In the last few years, any mention of Israel seemed to be connected to former President Donald Trump, who presented him with the Presidential Medal of Freedom in January 2020.

In September, Limbaugh spoke about the Abraham Accords that the Trump administration had helped come to fruition. “He’s the only guy that’s been able to broker any kind of peace in the Middle East in your lifetime or mine, and he did it between Israel and the United Arab Emirates,” he declared, ignoring several peace agreements by former presidents Jimmy Carter, Bill Clinton and George W. Bush, ranting that Trump should thus receive the Nobel Peace Prize.

In July of 1993, Limbaugh went on a five-day visit to Israel, where he said he learned a great deal about what the dispute in the Middle East was all about. There, he met Prime Minister Yitzchak Rabin, he visited the Western Wall; went to the Yad Vashem Holocaust museum and memorial in Jerusalem with Benjamin Netanyahu, who was at the time the leader of the opposition; and visited the Golan Heights, even commanding an IDF tank.

After the visit, he told his audience that Israel is surrounded by enemies and that he now understood why the debate over potential land concessions made people angry at the thought of giving up the little land they have. “The enemy could be so close to your heartland that it is frightening to them. When you understand the geography, it helps to put all this in perspective and why there is a lack of trust.”

More than a decade later, he returned back to that visit, talking about the Golan Heights and his tour there. “It’s where they take you when they want to illustrate the danger they’re in, and how surrounded they are and how people cannot envision it,” he said. “You go up to the Golan, and they can point to every nation that wants to wipe Israel out, and you can see it. You can see Syria. You can see Jordan. You can see every one of these threatening regions from the Golan. … And they tell you how vulnerable they are as a result of this.”

In a tweet after his passing, Netanyahu wrote condolences to Limbaugh’s family, saying “he was a great friend of Israel, and he stood by us through thick and thin—always firm, never wavering. We shall miss him dearly.”

A native of Missouri, Limbaugh married four times but had no children.