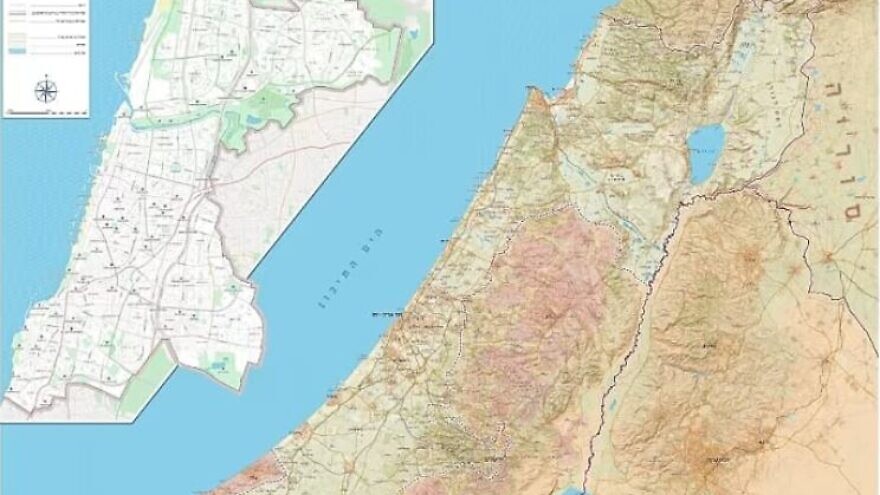 (August 24, 2022 / JNS) The Tel Aviv Municipality was criticized by the Israeli Education Ministry this week for producing and placing in schools an unauthorized and “prejudicial” map of the state.

The map shows the “Green Line,” which sets out areas captured by Israel in the 1967 Six-Day War, which according to the ministry is not permitted.

The ministry called the map “amateurish and unprofessional, invented by the Tel Aviv Municipality,” Ynet reported. “This is reflected in the cartography and prejudicial use of the term ‘sovereignty line,'” the ministry added, according to the report.

The map was “not submitted for approval by the Ministry of Education, and therefore it is not approved for study, not even for use as a poster on the walls,” the report continued.

“The only entity authorized to determine the maps of Israel is the Survey of Israel, [the country’s mapping center],” the ministry stated.

In response, the Tel Aviv Municipality said the maps had been produced after a “serious and in-depth” two-year process, and that it had contacted the ministry and the Survey of Israel to request a map and data but “none were provided,” Ynet reported.

David Elhayani, chairman of the Yesha Council, an umbrella organization representing local communities in Judea and Samaria and the Jordan Valley, said in a statement: “We are sorry that the Tel Aviv Municipality and its leader have proven how disconnected the first Hebrew city is from the people of Israel.

“Precisely at a time when there is no political pressure and the world has no doubt about our sovereignty in Judea and Samaria, the municipality of Tel Aviv is trying in a foolish and desperate step to stir up an old discourse from the ’90s. If it is important to the municipality of Tel Aviv that the students really get to know the State of Israel, then it is better for them to take tours and trips to the region, where they will learn about the history of the people of Israel and all parts of the country.”

Gush Etzion Regional Council head Shlomo Ne’eman said “the mayor of Tel Aviv, Ron Huldai, is referring to a line which is irrelevant and does not represent the consciousness of the Israeli public. Let’s remember that in the last Knesset election Huldai failed on a national level and quit because he did not receive the trust of the general voting public. Now from his perch in Tel Aviv, he is trying to manipulate consciousness in regard to the inheritance of our ancestors.”

Ne’eman added that Huldai had correctly pointed out one thing: “There is a great need to apply sovereignty over Judea and Samaria, where hundreds of thousands of Jewish citizens of the State of Israel are treated as second class, and any quipster can decide to remove us from the map at any time.”