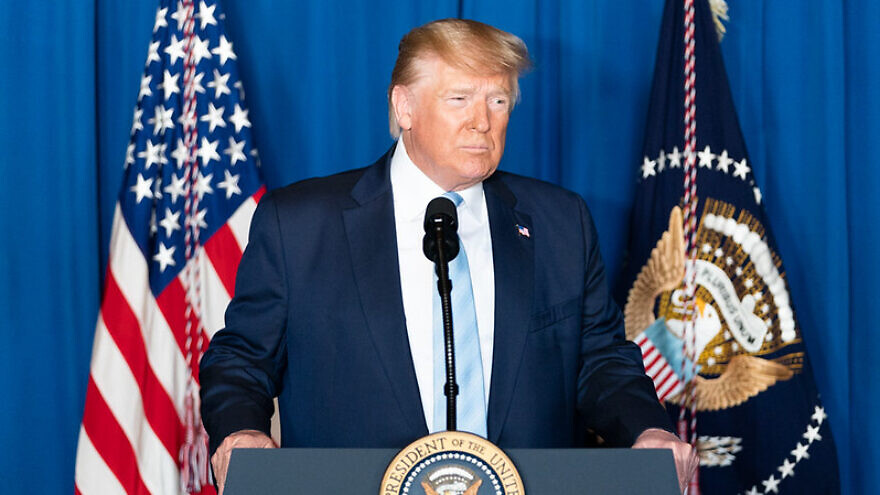 (January 26, 2020 / JNS) U.S. President Donald Trump said on Saturday that any negotiations with Iran over its nuclear program would have to be conducted with U.S. sanctions in place.

In an apparent response to comments made by Iran’s Foreign Minister Mohammad Javad Zarif during an interview on Friday with German newspaper Der Spiegel, Trump posted on Twitter in English and Farsi:

“Iranian Foreign Minister says Iran wants to negotiate with The United States, but wants sanctions removed. @FoxNews @OANN No Thanks!”

Iran’s Foreign Minister responded by tweeting on Sunday: “@realdonaldtrump is better advised to base his foreign policy comments & decisions on facts, rather than @FoxNews headlines or his Farsi translators.”

“DER SPIEGEL: Do you rule out the possibility of negotiations with the U.S. following Soleimani’s murder?

“Zarif: No, I never rule out the possibility that people will change their approach and recognize the realities. For us, it doesn’t matter who is sitting in the White House. What matters is how they behave. The Trump administration can correct its past, lift the sanctions and come back to the negotiating table. We’re still at the negotiating table. They’re the ones who left. The U.S. has inflicted great harm on the Iranian people. The day will come when they will have to compensate for that. We have a lot of patience.”

Separately, the deputy head of Iran’s nuclear agency, Ali Asghar Zarean, said in a report published on the agency’s website that “at the moment, if [Iranian authorities] make the decision, the Atomic Energy Organization [of Iran], as the executor, will be able to enrich uranium at any percentage,” reported Reuters.

Iran said earlier this month that it would remove limitations on enriching uranium, going against commitments it made in the 2015 nuclear deal.