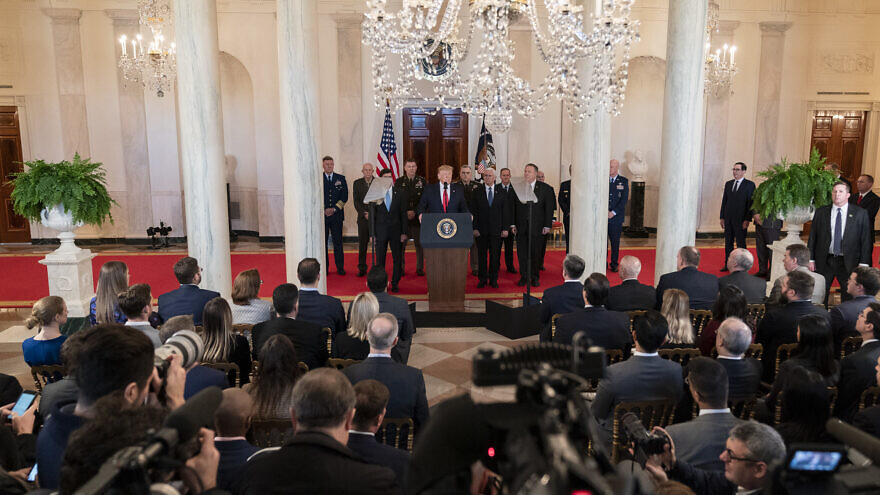 (January 8, 2020 / JNS) Middle East experts reacted to U.S. President Donald Trump’s address on Iran on Wednesday, which called for new sanctions on Iran and further NATO involvement, by saying the president further doubled down on his maximum pressure campaign against Iran, while also projecting American deterrence.

“The speech came off as a presidential one,” Jonathan Schanzer, senior vice president of research at the Foundation for Defense of Democracies, told JNS. “The president is hewing to his own policy, which is drawing red lines at the loss of Americans while continuing to put pressure on the regime for its wide range of malign behavior. But that pressure does not include military force unless Iran crosses Trump’s red line.”

In other words, said Schanzer, it was “a rearticulation of a policy already in place.”

The address to the nation from the White House came after early-morning strikes on Wednesday by Iran’s Islamic Revolutionary Guard Corps (IRGC) hit the Ain Al-Asad and Irbil air bases in western Iraq, which also house U.S. soldiers. The Iranian strikes were in retaliation for the U.S. killing of IRGC Quds Force Maj. Gen. Qassem Soleimani at Baghdad Airport on Jan. 3.

In it, Trump called for Iran to abandon its nuclear ambitions and sponsorship of terrorism.

“What he was able to do was project American deterrence,” Gold Institute senior fellow Matthew Brodsky told JNS. “He was able to show the other side of the political aisle claiming that he’s getting America into war and has no idea what he’s doing. He gets to dunk on that idea.”

Brodsky said the president also “gets to claim an incredible victory for having killed Soleimani and [Popular Mobilization Forces deputy Abu Mahdi al-] Muhandis and having this be the only symbolic response from Iran. There’s still a lot of dangerous aspects of what Iran did, but that could be addressed.”

Nevertheless, Barbara Slavin, who leads the Atlantic Council’s Future Iran Initiative, criticized the address, though noted “it could have been worse.”

That said, it was full of bluster and lies, she told JNS, including “the claim that Soleimani was involved in the deaths of ‘thousands’ of American troops. There was a pitch for diplomacy at the end, but coupled with the threat of yet more sanctions. The most bizarre comment was that he wanted to work with Iran against ISIS.”