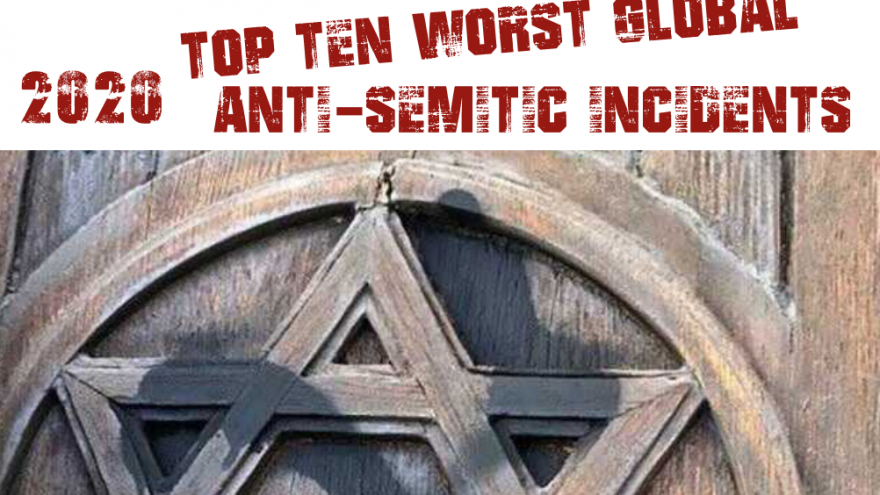 Rabbi Abraham Cooper, associate dean and director of Global Social Action Agenda at the Wiesenthal Center, said that while it was tough to limit the list to only 10 incidents this year, the “weaponization” of the COVID-19 pandemic against minority groups, and particularly Jews, ultimately took the top spot.

“In places like Germany, where they had demonstrations against a vaccine before it was even available … among the protesters were anti-Semites and those who were misusing Holocaust symbols,” said Cooper. He acknowledged that the anti-vaccine movement is by and large not anti-Semitic, but said anti-Semitism was evident in the “pernicious nature of individuals and groups who want to take advantage of the virus.”

Second on the list was encrypted messaging app Telegram, which Cooper said is “becoming the weapon of choice, the platform of choice, for extremist groups.”

Rick Eaton, director of research at the Wiesenthal Center, pointed out that neo-Nazi groups like the Atomwaffen Division—a group that has been reportedly linked to five killings in the United States—are among the extremist groups that use the app. Other groups include the anti-government Boogaloo Movement and the Nordic Resistance Movement, a group that has targeted a synagogue and other Jewish institutions on Yom Kippur.

Nation of Islam leader Louis Farrakhan’s July 4 address is third on the list. Cooper explained that while for Jews, Farrakhan’s name invokes memories of his long list of anti-Semitic tropes, some in the black community view him as synonymous with black empowerment.

“Louis Farrakhan’s tropes were repeated by sports stars and other cultural elites,” said Cooper. “One of the few voices who spoke out in real time against this trend was Kareem Abdul-Jabbar … who challenged the bigotry he was seeing in his own community,” he added. Abdul-Jabbar wrote an op-ed in The Hollywood Reporter about the matter in July.

“There’s a lot of healing that needs to go on, but also an understanding … that Louis Farrakhan is not a source of hope but a source of hate,” said Cooper.

Number four on the list were the attacks on Jewish houses of worship in the wake of the Black Lives Matter protests.

Coming in at No. 5 was a tweet in May by Iranian Supreme Leader Ayatollah Ali Khamenei to mark Al Quds (“Jerusalem”) Day (a holiday invented by Iran) that invoked the Nazis’ “Final Solution.”

Cooper lamented that there “was no major outcry from the European nation[s] … no real price to pay for that regime’s profound Jew-hatred and Holocaust denial, and that silence goes right to the top of most of the countries.”

The European Court of Justice’s Dec. 17 ruling that upheld a Belgian regulation essentially banning kosher slaughter took sixth place on the list. The regulation requires animals to be stunned before being slaughtered, which violates kashrut requirements. Kosher and halal slaughter is a “core religious value … going back thousands of years” for both Jews and Muslims, said Cooper.

He added that the allegation that stunning animals eases their suffering is “especially galling,” since it was the Torah that first stated that animals must not be subjected to “unnecessary pain.”

The ruling was “a terrible blow to European Jewry,” he said.

At number seven was the attempt in Germany to overturn a resolution by the Bundestag (parliament) denouncing the BDS movement as anti-Semitic, an attempt Cooper said was “particularly outrageous” given German history. He added that most Germans understand that swastikas and support for Hezbollah are anti-Semitic, but don’t seem to understand how anti-Semitism from the left consists of “an effort to delegitimize the very notion of a Jewish nation.”

At number eight was anti-Semitism on U.S. college campuses. Among the examples cited were recent tweets from University of California Merced professor Abbas Ghassemi depicting “The Zionist Brain” and alleging that “the Zionists and IsraHell interest have embedded themselves in every component of the American system.” The list also highlighted how University of Southern California student Rose Ritch resigned from her position as student vice president over the summer after being harassed on social media for being a Zionist.

Cooper criticized USC’s response to the Ritch incident as “tepid.” “USC, going back to the 1930s, has a very … checkered past when it comes to standing up for Jews and speaking out against Nazis,” he said. Cooper added that any other minority group “would have full backing of the university, as they should,” but that there was a “deeply disturbing double standard when it comes to Jewish and Zionist students.”

At number nine was a questionnaire released by the New York City Democratic Socialists of America (DSA) chapter for candidates running for city council, asking if they would “pledge not to travel to Israel if elected to City Council out of solidarity with Palestinians living under occupation.”

The chapter later clarified that they were referring to how city council members are taken on an annual trip to Israel and affirmed that they are not opposed to candidates taking personal trips to the Jewish state.

Cooper called the question “a declaration against the Jewish community in New York” and said that voters “need to reject this kind of bigotry.”

The final incident on the list is the rise of Chilean politician Oscar Daniel Jadue. Jadue, the current mayor of Recoleta, is a member of the Communist Party and is supportive of the BDS movement. According to Cooper, Jadue, a national figure who has been mentioned as a future president, has called Jews a “subversive force” that will stab the country in the back. That there is a chance Jadue could lead Chile, which has the third-largest Jewish population on the continent, was “shocking,” said Cooper.

Said Cooper: “We hope today’s release of the list will spurn international concern and content [about Jadue].”